SJW’s: LOSERS OR JUST FOOLS? – SJW’s are the modern-day equivalent of those primly disapproving religious nuts who spent their lives trying to impose their own uptight notions of right and wrong on other people. Except SJW’s are even more sad and pathetic.

By way of this general announcement I will once again remind the ridiculous poseurs who refer to themselves as SJW’s that, if they expect me to allow their comments to show – comments in which they absurdly refer to themselves with that hilariously pretentious and grandiose SJW label – then they have to address me as a “Heroic Defender of Freedom.”

Doing so might just convey to you what silly “only child” jackasses you look like to other people when you use that lame SJW title.

First – Calling YOURSELF an SJW is as meaningless as the way some of you compound this narcissistic idiocy by labeling yourselves a “Public Intellectual” on your social media home pages. Face it, if you’re reduced to designating YOURSELF as an intellectual – public or otherwise – you’re probably not one.

Second – The term “Social Justice” is as ridiculous as the Right-Wing term “Family Values.” Reasonable adults will not necessarily ever agree on the meaning of such silly generalities. Everyone knows when SJW’s and their ilk refer to Social Justice they REALLY mean only their own definition of it – a definition polluted by their political prejudices and self-centered drama queen tendencies.

Third – “Warriors” do not simply file a complaint about every person who says something they disagree with. “Snitches,” “Crybabies” and “Informants” do, however. END_OF_DOCUMENT_TOKEN_TO_BE_REPLACED

The biggest regret of my life is that I used to belong to the increasingly deranged party of the Democrats. I became an Independent voter long ago and I’m glad to see other former Democrats taking to social media with their stories about why they decided to #WALKAWAY.

Ever since the release of the Mueller Report further debunked the already absurd Russian Collusion and “obstruction” (LMAO) fantasies of the Democrats they have frothed at the mouth and proceeded as if the exact opposite happened. People who still rant and rave about collusion and obstruction are as idiotic as people who claimed Obama was “a Muslim sleeper agent” or say that aliens abduct them on a nightly basis.

Democrat lunacy aside, that Party of slavery, the Ku Klux Klan, Jim Crow, Japanese Internment, The Trail of Tears and so much more continues to pile on the abhorrent behavior. Links are below but for just a handful of the latest Democrat atrocities:

*** Democrats have now labeled the police “The Blue Klux Klan.”

*** Democrats now move to have candidates they don’t like kept off of state ballots.

*** Democrats do that while continuing to fight legal efforts to stop their vote fraud travesty called “vote harvesting.” END_OF_DOCUMENT_TOKEN_TO_BE_REPLACED

Here are some of the latest:

END_OF_DOCUMENT_TOKEN_TO_BE_REPLACED

Peter Schweizer’s 2018 non-fiction book regarding the way that the rival gangs of white-collar criminals called Democrats and Republicans have raised graft and illegality to new levels has been named the Fourth Best Book of All Time at Exposing Political Corruption. That’s from BookAuthority.com. 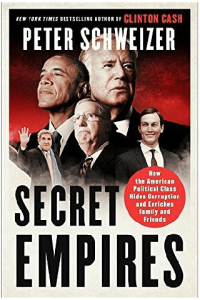 The book is titled SECRET EMPIRES: HOW THE AMERICAN POLITICAL CLASS HIDES CORRUPTION AND ENRICHES FAMILY AND FRIENDS. Schweizer pulls no punches and – as Balladeer’s Blog loves to see – details corruption by BOTH the Democrats and Republicans. Have I mentioned lately that we need Third Parties? Yeah, I thought I had.

Joe Biden’s notoriously crooked family is examined in great detail, not just from his involvement in the corrupt and scandal-ridden Obama Administration but from his own brand of (characteristically) awkward and ham-fisted influence-peddling.

Mitch McConnell (R), China, gets blistered as well over his apparent presence in the pockets of Big Money from overseas. Jared Kushner, the Fredo Corleone of the Trump Administration, is also exposed as the would-be graft-grabber he has long seemed to be.

Democrat and Republican office-holders are just part of the story as Schweizer also looks at bloated rich pig “political donors” like George Soros, the Koch Brothers, Tom Steyer and others who own America’s bought and paid-for office-holders.

SECRET EMPIRES: HOW THE AMERICAN POLITICAL CLASS HIDES CORRUPTION AND ENRICHES FAMILY AND FRIENDS can be bought HERE

De facto Third Party President Donald Trump continues to confound the two gangs of white-collar criminals called Democrats and Republicans. This unlikeliest hero of them all has helped the working class and poor of all colors despite the overwhelming odds against him.

Recently even the Democrat outlet The New York Times was forced to admit to the size of the tax cuts President Trump brought to the middle class. And the Democrats’ Illegal Immigrant Colonies that call themselves “Sanctuary Cities” (How Orwellian) showed their hypocrisy. They like enough illegal immigrants on hand for voter fraud (“vote harvesting”) purposes but beyond that Democrats raged at the thought of the recent flood of illegal immigrants actually being brought into their political fiefdoms so that Democrats can experience the suffering that border cities endure from illegal immigration.

At any rate courageous Clarice Feldman, a strong woman and a positive female role model for an entire generation (I know, right?) wrote a terrific piece titled Trump’s Rebel Alliance Attacks The Left’s Death Star. Feldman wrote and also quoted from other sources. The link is below, but first some excerpts:

“… this week the President and the rebel alliance cracked through the Democrats’ Death Star of lies , deceit, and unpunished illegalities.”

“It was fun to watch, and I think it’s just begun.”

” Juliette Akinyi Ochieng – Conservatives who are black have been speaking out for a long time. But the House Republicans finally invited one — Candace Owens, a fine speaker and advocate for conservatism — and, thereby, provided a spotlight. That House Democrats made fools of themselves was mere icing. And it was sweet. We should all rejoice in this.” … “The video of her (Candace’s) feat on C-Span received more hits than any other Twitter/CSpan video.”

This could be termed a double-header act.

Maxine Waters, Chair of the House Financial Services Committee, grilled bank officials on the student loan program, forgetting that a decade ago Obama nationalized the program, something she had twice voted for.

And if that doesn’t give you confidence in our elected elites, Senator Kirsten Gillibrand, a member of the Senate Armed Services Committee, confused tactical nuclear weapons with tactile ones.”

END_OF_DOCUMENT_TOKEN_TO_BE_REPLACED

It’s no secret that Democrats have become the new Nazis, despite their tendency to project their own fascist feelings onto the people who courageously oppose them. Just one of the latest examples involved a bigoted Democrat attack on Paloma Zuniga at a Post Office in Chula Vista.

Luckily the heroic Ms Zuniga recorded the hate-filled assault on her. END_OF_DOCUMENT_TOKEN_TO_BE_REPLACED

Joshua Foxworth recently authored an excellent work about the way that illegal immigration has been used as a form of economic warfare which has been devastating the American working class of all colors. The only misstep I see in the article is the way the author fell into the pro-illegals rhetorical trap of acting like opposing illegal immigration is the same as opposing legal immigration. I added “illegal” parenthetically in the following excerpts.

The link is below, but first those excerpts: 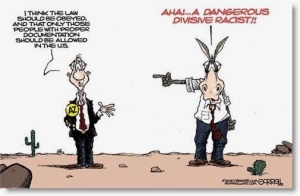 *** Write articles condemning (those opposed to illegal immigration) and ensure that anyone who employs them will be targeted as well.”

” … Using these practices the (illegal) immigrant population and their supporters can effectively destroy the ability of any native member to economically support themselves.”

” … First, this is hidden but as their power grows it moves into the open. This can be seen in Congresswoman Ocasio-Cortez asserting that immigration laws should not apply to Latinos as this land is rightfully theirs, as well as Senator Kamala Harris asserting that foreign nationals have the right to make laws with respect to U.S. citizens.” END_OF_DOCUMENT_TOKEN_TO_BE_REPLACED