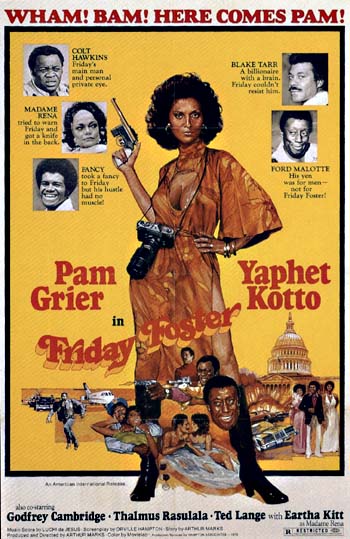 FRIDAY FOSTER (1975) – Pam portrays the title character, a comic strip heroine from the 1970’s who was often called “the black Brenda Starr.” Friday Foster worked as a photographer for a national weekly and the comic strip figure was regularly involved in much grittier adventures than Brenda Starr (or Mark Trail for that matter) ever had.

In this movie Friday uncovers a plot by White Supremacists to assassinate every prominent African American in the United States. Friday’s investigation into these dastardly goings-on leads her along a lengthy trail of victims, some of them played by very big-name stars. For instance:   END_OF_DOCUMENT_TOKEN_TO_BE_REPLACED

Supposedly they are remaking this 1970s Blaxploitation movie, at least according to Balladeer’s Blog readers who requested I review it. As it turns out I did review it in 2012, so here it is again.

For the link to that review – an article where I reviewed several other Blaxploitation films as well, click HERE 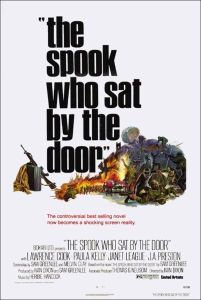 THE SPOOK WHO SAT BY THE DOOR (1973) – The title of this explosive film, based on the controversial novel by Sam Greenlee, plays on the old double meanings of the slang expression “spook”. While spook could be used as a derogatory term for a black person it could also refer to a secret agent.

The story’s hero, played by Lawrence Cook, is an African American working in the domestic offices of the Central Intelligence Agency. While outwardly an efficient and capable paper pusher he inwardly regards himself as an undercover operative for his own race, infiltrating the white intelligence establishment.

After  five years of learning all he can via secretly reading CIA operations files our protagonist, significantly named Dan Freeman, decides to launch a covert operation of his own to destroy the white power structure and elevate his people to positions of authority. END_OF_DOCUMENT_TOKEN_TO_BE_REPLACED 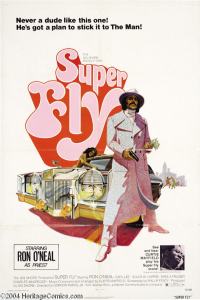 SUPERFLY (1972) – While unfairly pigeonholed as a blaxploitation movie Superfly is in reality a monumentally overlooked classic of American gangster films.

Some of the blame for the lack of respect accorded this cinematic masterpiece comes from the outrageous movie posters that make it look like standard blaxploitation fare to modern film viewers. In reality Superfly pioneered some of the story elements that other blaxploitation flicks would turn into laughable cliches with their incessant repetition.

Another obstacle to celluloid respectability is the title, which became synonymous with the lead character, played masterfully by Ron O’Neal. Actually, O’Neal’s character is named Youngblood Priest. “Superfly” was the adjective used to describe the high quality of the cocaine Priest pushed to his customers, as in the line of dialogue “Priest, you sell some superfly shit!” END_OF_DOCUMENT_TOKEN_TO_BE_REPLACED 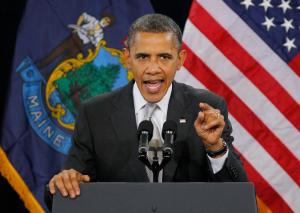 OBAMA: I usually just ignore black-on-black violence but dammit, even when a black cop shoots a black suspect I will ALWAYS promote violence against the cops!

My contempt for America’s Democrats and Republicans is not a secret. I was tempted to post a mock-news story today headlined EVERY DEMOCRAT AND REPUBLICAN ELECTED OFFICIAL DIES FROM MYSTERY DISEASE: NATION REJOICES. Instead I decided my review of the blaxploitation satire Funky Ferguson would be more appropriate.

FUNKY FERGUSON (2014) – This was one  of the biggest money-makers of 2014. Funky Ferguson is the title character of this very dark satire which uses the style and structure of 1970’s blaxploitation films to comment on the horrific events in Ferguson, MO. 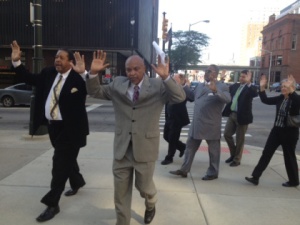 The events that spawned the whole “Hands up, don’t shoot” lie are depicted in disjointed and irreverent ways. The main character Funky Ferguson is in the mold of figures like the Black Baron from The Candy Tangerine Man. The Funky One keeps the streets safe for criminal elements and prevents law-abiding African-American business owners from fighting back against the thugs.

Funky Ferguson’s many triumphs over The Man mean nothing but hardship and personal tragedy for other African-Americans, who watch their children being killed by African-American criminals on a regular basis. Funky cares nothing for them or the “crapitalist” (as he calls them) business owners.

Gradually all of the promising young African-American children in Funky Ferguson’s hood wind up getting preyed upon and eventually killed by the brainless, violent black thugs who are the only kids worth caring about in the eyes of Funky Ferguson, the politicians and the media.

An entire generation of creative and hopeful African-American children come and go, slain by street gangs like the film’s Gentle Giants, unmourned by a world that cares only for the plight of the sadistic criminals who killed them. Only those criminals are elevated and considered “heroic” by the demagogues of “the community”. END_OF_DOCUMENT_TOKEN_TO_BE_REPLACED

BLAXPLOITATION IN BLACK AND WHITE 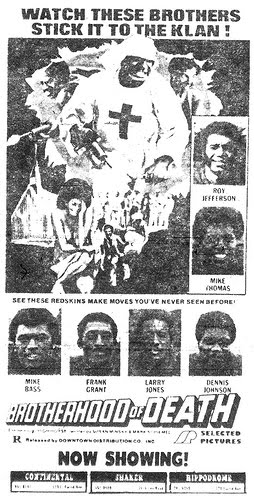 Blaxploitation is as misunderstood and unfairly dismissed a sub-genre as Spaghetti Westerns are. It’s not all pimps, pushers and prostitutes. There were also street-level heroes as colorful as any in the old Pulps. In addition some of the most watchable blaxploitation flicks featured cathartic scenes of African-Americans blowing away Democrats of the Ku Klux Klan and genocidal neo-Nazis plus – decades before Django Unchained – a few Westerns showed former slaves turned gunslingers shooting down actual slave-owners and slave-traders. 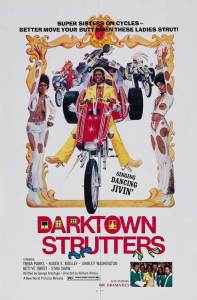 Comment: From Pulpish action epics to political satire to black biker films to tastelessly explicit looks at the hardcore ugliness of the Atlantic slave trade, these films boldly went where no mainstream movies of the time period dared to go.

Examples: Superfly, a neglected gangster classic … The Spook Who Sat by the Door, about a successful armed black uprising … The Brotherhood of Death, featuring black Vietnam vets fighting the Klan … Mister Deathman, with a black James Bond in Apartheid-era South Africa. 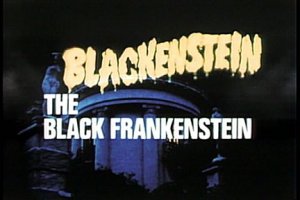 Balladeer’s Blog’s month-long celebration of Halloween continues! When it comes to the tasteless but enjoyably bad blaxploitation horror films of the 1970’s it seems like the lion’s share of the attention always goes to Blacula and its sequel, Scream, Blacula, Scream with a little attention left over for Ganja and Hess, since it features the African American hero from the original Night of the Living Dead in one of his few screen appearances.

In honor of the Halloween season Balladeer’s Blog will take a look at some of the neglected blaxploitation horror movies, all of which deserve to have a larger audience than just me and my fellow bad movie geeks. It’s in the spirit of my END_OF_DOCUMENT_TOKEN_TO_BE_REPLACED 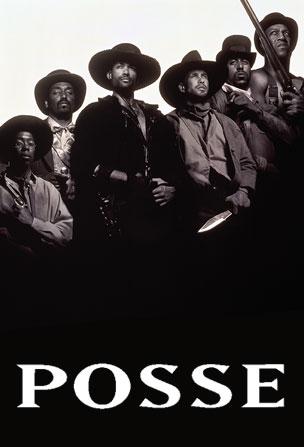 POSSE is a terrific western about a gang of African American gunfighters (plus the goofiest Baldwin brother) involved in an action-packed epic journey across the American west. The Frontierado holiday (which will be here Friday August 2nd) is the perfect time of year to hunker down with this film while drinking a Cactus Jack or a Deuces Wild or two. I’ll review the recipes for those mixed drinks in a few days, for now we’ll focus on the third-place movie on our countdown.

Posse stars Mario Van Peebles, who also directed, as Jesse Lee, the brooding, revenge-driven hero of the saga. He and all but one member of his gang, our titular posse, are soldiers fighting in Cuba during the Spanish-American War in 1898. A dangerous assault they carry out turns out to be 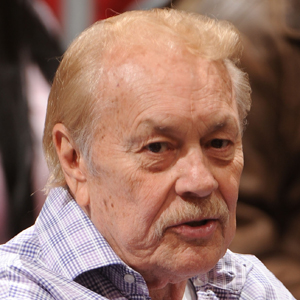 Jerry Buss: He was no Arthur Marx.

Today legendary Lakers owner Jerry Buss passed away at age 80. Balladeer’s Blog will save the in-depth examinations of his career to those who are far better qualified to do it. Instead I will offer a fond farewell to one of the most beloved owners in professional sports in my usual oddball way: with a look at the one and only film turned out by Jerry Buss Productions.

That film was 1974’s Black Eye, one of the countless blaxploitation flicks of the 1970s. Fred “The Hammer” Williamson, the action hero of all manner of the decade’s blaxploitationers, from gangster dramas to westerns, starred in Black Eye as (what else) a private eye. Williamson portrayed Shep Stone, an L.A. detective trying to solve a series of murders centered around an elaborate walking stick formerly owned by a legendary silent film star. A prostitute stole the walking stick and wound up dead in an incident that served as the catalyst for Shep Stone’s involvement in END_OF_DOCUMENT_TOKEN_TO_BE_REPLACED 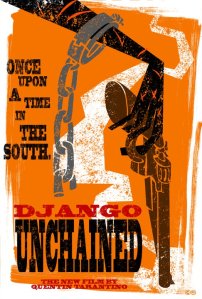 I have been getting emails asking me to comment on the Quentin Tarantino reboot of Django in his new movie Django Unchained. I already did, months ago. Below is the link for the interested parties now that there is so much discussion of Jamie Foxx’s comments going on.

My view on the Django phenomenon also included a look at ALL the 1960’s, 1970’s and 1980’s Django flicks plus my tongue-in-cheek biography of Django.

It all started, however, with the review where I examined the original Django and two blaxploitation westerns about a former slave blowing away former Confederates in the Wild West.

THE ORIGINAL DJANGO AND TWO BLAXPLOITATION WESTERNS: A PRIMER FOR DJANGO UNCHAINED 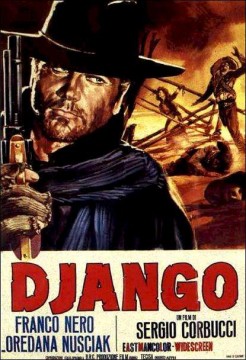 The upcoming release of Quentin Tarantino’s reboot of the seminal Spaghetti Western saga Django wreaked some minor havoc with my recent Frontierado holiday posts. I had been working on a draft for a review of the original Django and its central figure contrasted with other EuroWestern heroes like Charles Bronson’s Harmonica, Gianni Garko’s Sartana, Terence Hill’s Trinity, Tony Anthony’s Stranger and of course Clint Eastwood’s Man With No Name.

I also had a draft in progress for a review of two blaxploitation westerns from the 1970s which featured a former slave turned gunslinger taking on former Confederates in the Wild West.

A few days before I was to publish those reviews the airwaves and the web started crawling with what seemed like ’round the clock trailers for Django Unchained, Tarantino’s reboot of the story, this time with the title figure an African American who goes from slavery to a career as a bounty hunter gunning down southern rednecks in the Wild West.

Instantly my two reviews, right down to AN ACTUAL JOKE I WROTE THAT, ASTONISHINGLY ENOUGH, SHOWS UP IN THE TRAILER FOR DJANGO UNCHAINED, seemed like END_OF_DOCUMENT_TOKEN_TO_BE_REPLACED