LEGENDS OF THE SPRING: A LOOK AT THOSE SEASONAL MYTHS WHICH HAVE THE SAME THEME

Spring keeps trying to arrive but this bitter winter refuses to give up just yet. Our nationwide longing to be liberated from the tyrannical grip of winter made this a good time to examine some of the ancient myths about winter and the coming of spring. The celebration of those myths at this time of year plus the fact that many of those myths centered around dead and resurrected deities necessitated Christianity’s attempt to superimpose its OWN dead and resurrected deity over top of those older stories. Hence the celebration of Easter in springtime. (And it’s not just Christianity that behaved that way – other religions also would superimpose their own celebrations over top of those held in honor of the previously dominant gods in their region. I’ll cover the behavior of those other belief systems – especially Islam and the Incan faith – another time.)

Not all seasonal myths conformed to the following pattern. I’m limiting this list to the ones that did.

The Tale: Persephone was the beautiful daughter of the goddess Demeter (Ceres to the Romans). Persephone caught the eye of Hades, the god who ruled over the realm of the dead. Overcome with lust Hades (Pluto to the Romans) emerged from his subterranean domain and stole Persephone away to his realm to become his Queen.

The Savior: Demeter went searching for her daughter throughout the world, often assuming the form of a mortal woman. Her search wore on and on with no results, causing Demeter to fall more and more deeply into despair. Because she was the goddess of nature that despair manifested itself in colder weather, in the leaves falling off the trees, other vegetation dying and some animals hibernating or migrating to flee the cold.  END_OF_DOCUMENT_TOKEN_TO_BE_REPLACED

NATIONAL CHAMPIONSHIP GAME – You can call 2014 the Year of the Mule, at least in NCAA Division Two men’s basketball. This year’s title tilt came down to a pair of Two Seeds – the UNIVERSITY OF CENTRAL MISSOURI MULES and the WEST LIBERTY UNIVERSITY HILLTOPPERS. The teams seemed evenly matched at first and as the Halftime buzzer sounded the Hilltoppers were in the lead by a tight score of 39-37. END_OF_DOCUMENT_TOKEN_TO_BE_REPLACED 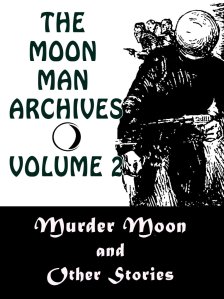 I’m continuing my look at Frederick C Davis’ 1930′s pulp hero the Moon Man. In reality police detective Stephen Thatcher, the Moon Man stalked the night-darkened streets of fictional Great City clad in his black costume and his helmet made of one-way Argus glass. Armed with two automatic pistols plus limitless courage and ingenuity the Moon Man captured or killed Great City’s most dangerous criminals –  both white collar and blue collar – and robbed them of their ill-gotten booty. He would then distribute that money to the city’s Great Depression-ravaged poor. All this made him hunted by both the crooks AND the cops. For more on the Moon Man and other neglected pulp heroes click here: https://glitternight.com/pulp-heroes/

34. PREVIEW TO MURDER – The title is meaningless because there are no outright “murders” in this story, just 4 deaths in shootouts and those don’t happen until the end of the story. Davis apparently just wanted to use the word “preview” because the villains in this flick are a bogus newsreel company who use their business as a cover to commit robberies at or near the “news events” they cover. The story starts out with the Moon Man vying with the newsreel crooks – “Independent Sound Films, Inc” – for the $15,000 (in 1930’s money) in the safe of corrupt tycoon and politician Harley Elbridge. The daring theft takes place while Elbridge is making a speech about his pet topic – if he gets elected Mayor of Great City he’ll replace most of the police force brass and make capturing the Moon Man his number one priority. END_OF_DOCUMENT_TOKEN_TO_BE_REPLACED

FIRST SEMIFINAL – The 2nd seeded WEST LIBERTY UNIVERSITY HILLTOPPERS did battle with one of the remaining One seeds – the UNIVERSITY OF SOUTH CAROLINA- AIKEN PACERS for the right to move on to the NCAA Division Two Championship Game. To the surprise of many the Hilltoppers had actually carved out a 41-40 lead for themselves by Halftime.

In the 2nd Half the game remained tight and intensely competitive. The teams were running neck and neck like a pair of racehorses but when all was said and done the Hilltoppers advanced, thanks to an 86-83 victory over the Pacers. Shawn Dyer of West Liberty University led his team by tossing in 30 of the Hilltoppers’ 86 points. END_OF_DOCUMENT_TOKEN_TO_BE_REPLACED

LATEST AP POLL SHOWS ONLY 26% OF AMERICANS LIKE OBAMACARE

“Why would I care? You morons ALREADY reelected me!”

As always Balladeer’s Blog is the only site on the web that equally criticizes Liberals and Conservatives. The latest AP poll revealing that only 26% of Americans like Obamacare will be no surprise to anyone. After all, Obamacare NEVER should have been passed in the first place because even when it passed -in a vote that went strictly along party lines – the polls AT THAT TIME were already showing that the vast majority of Americans DID NOT WANT IT PASSED. What kind of  END_OF_DOCUMENT_TOKEN_TO_BE_REPLACED

ELITE EIGHT – GAME ONE – For newbies to Balladeer’s Blog I’ll point out that Division Two uses a regional system that allows for more than just four One seeds and Two seeds. At any rate last night the 2nd seeded UNIVERSITY OF CENTRAL MISSOURI MULES kicked things off in a hardcourt battle with one of the 1 seeds – the SOUTHERN CONNECTICUT STATE OWLS. The Mules had managed a little bit of separation by Halftime and led 45-39. After the break what was already a terrific game became an Instant Classic as the Owls offered an in-your- face challenge to UCM until at last the 2 seeds pulled away. In the end the Mules moved on to the Final Four with a 98-88 victory. Daylen Robinson’s 28 points led Central Missouri.

ELITE EIGHT – GAME TWO – Another One seed – the METRO STATE UNIVERSITY ROADRUNNERS – faced the only true Cinderella remaining in the NCAA Division Two tourney – the 8th seeded TUSKEGEE UNIVERSITY GOLDEN TIGERS. The level of competition at last caught up with the hard-fighting Golden Tigers and by the break the Roadrunners had “beep- beeped” their way to an impressive 42-28 lead. The 2nd Half was an offensive explosion for both teams but Tuskegee was never going to win a battle of exchanging baskets and Metro State triumphed by a Century Club-worthy score of 106-87. Brandon Jefferson tossed in 26 of those 106 points to lead the Roadrunners.   END_OF_DOCUMENT_TOKEN_TO_BE_REPLACED

THE MAN FROM S.E.X. (1979) – Category: Fun-bad but not classically bad enough for my highest rating.

Bind … Charles Bind. In the cinematic world of cheapjack James Bond ripoffs the three films that featured Lindsay Shonteff’s secret agent Charles Bind aka “Number One” are possibly THE worst. “The Bind Trilogy” deserves to be as well-known to fans of bad movies as flicks like Operation Double 007, Danger! Death Ray and Trunk to Cairo. All three of Number One’s movies are Number Two (had to be said) but The Man From S.E.X. pretty much Harry Alan Towers (rimshot) over the other two in terms of awfulness.

Nicky Hensen portrayed Bind … well, given Hensen’s limited thespian skills let’s instead say “he was billed as Bind in the credits” of the first Charles Bind/ Number One film, titled Number One of the Secret Service (1970). (Jon “Dr Who” Pertwee was in the Hensen film, too)  Gareth Hunt (of New Avengers fame) was billed as Bind in the credits of this middle film in the series and in 1990 came the third and final film Number One Gun, starring Michael Howe (of Tom Grattan’s War fame). The first and third pitted our hero against the evil organization K.R.A.S.H. (Killing, Rape, Arson, Slaughter and Hits) but The Man From S.E.X. featured a different – but no less absurd – villain.