SUPER PRESIDENT was an actual cartoon series from the 1960’s that has virtually disappeared. It’s rare to catch a glimpse of this DePatie- Freleng show anywhere or even to find people who have heard of it outside of oddballs like me.

This cartoon was not intended for laughs, like it would be today. It honestly featured a superhero whose “secret identity” was being President of the United States. First off, there’s the absurd fun of END_OF_DOCUMENT_TOKEN_TO_BE_REPLACED

KANAJUK – This god was the giant sea scorpion who was the husband Sedna shared with her armless mother, Isarrataitsoq. Kanajuk often END_OF_DOCUMENT_TOKEN_TO_BE_REPLACED

Sorry for the delay in getting this up but I was without internet access for awhile. But I know that’s a petty complaint considering how hard some places got hit by the hurricane. Anyway, D3 football doesn’t get started til next week so that’s why no D3 scores are mentioned this time.

Scares For Some Top-Ranked Teams – Thursday night the NJCAA’s number one team, Navarro College, needed overtime to defeat the third-ranked Butler (KS) Grizzlies and yesterday D2’s second-ranked team, the Delta State Statesmen, had to struggle to get past the ECSU Vikings in a 28-21 game that was sloppy but fun.

…And Don’t Let The Door Hit Your Butt On The Way Out – The Jamestown College Jimmies opened their 2011 season with an emotion-charged game against the South Dakota School of Mines and Technology Hardrockers, who left the Dakota Athletic Conference after last year. The Jimmies already defended the DAC’s honor in last year’s season-ending Dac Bowl Event and didn’t miss a beat resuming their “who needs ya” lesson for the Hardrockers. This was a very tight game but Jamestown College won in overtime 23-20 on the Hardrockers’ own field.

My fellow movie host geeks and I need to seriously scour the world to find some better photographs of this lady. Moona Lisa (Lisa Clark in real life) was an active movie host for twelve years beginning in 1963. Though Moona Lisa is most often associated with San Diego’s Science Fiction Theater, her longest-lasting show, she also hosted Moona’s Midnight Madness in St Louis for over a year and for eighteen months had even stepped in to replace END_OF_DOCUMENT_TOKEN_TO_BE_REPLACED

The Hutchinson Blue Dragons incinerated the Kilgore College Rangers last night by a score of 60-29. Hard to believe it was just a 12-9 Hutchinson lead with 11 minutes left in the 2nd quarter. Fireworks went off at the end of the game, with the home crowd hoping to see several more such displays as the season goes on, beginning with next week’s game vs the Independence Pirates. Though that first game was a blowout by Hutch another Jayhawk Conference team, the Butler (KS) Grizzlies, were involved in a very tight matchup. Their rematch with END_OF_DOCUMENT_TOKEN_TO_BE_REPLACED

While certain sports news outlets are obsessed with covering every pre-pubescent moment of the Little League World Series tonight’s start of actual football games that matter is not being neglected here at Balladeer’s Blog. As promised a few days ago here is a rundown of tonight’s games accompanied by links to follow those games where available:

The Butler (KS) Grizzlies are END_OF_DOCUMENT_TOKEN_TO_BE_REPLACED

I’m continuing my look at Frederick C Davis’ pulp hero the Moon Man. In reality police detective Stephen Thatcher, the Moon Man stalked the night-darkened streets of fictional Great City (“Great City ya got here … it’d be a shame if something happened to it …”) clad in his black costume and his helmet made of one-way Argus glass. Armed with a revolver plus limitless courage and ingenuity the Moon Man captured or killed Great City’s most dangerous criminals (white collar and blue collar) and robbed them of their ill-gotten booty. He would then distribute that money to the city’s Great Depression-ravaged poor. ( “Great Depression ya got here … it’d be a shame if – ” oh, forget it!) All this made him hunted by both the crooks AND the cops. For more on the Moon Man and other neglected pulp heroes click here: https://glitternight.com/pulp-heroes/

1. THE SINISTER SPHERE – This initial story of our urban Robin Hood nicely establishes all the whys and wherefores of the Moon Man universe. In the opening, set in June of 1933, our hero robs the mansion of white-collar criminal Martin Richmond. The press and politicians of Great City are pressuring the police force to end the Moon Man’s months-long “crime spree”. MM’s alter ego, Detective Stephen Thatcher pretends he’s END_OF_DOCUMENT_TOKEN_TO_BE_REPLACED

The Hutchinson Blue Dragons will host the Kilgore College Rangers in one of the spotlight college football games coming up this Thursday night in the divisions Balladeer’s Blog covers. On Thursday I’ll be providing links to audio and video coverage for that game and many others! Another pigskin event that night will be this year’s edition of the END_OF_DOCUMENT_TOKEN_TO_BE_REPLACED

Some of my e-mailers requested that I review this movie, but I already did last year. Here it is again for those folks who requested it, along with a reminder that you could have instant gratification for your bad movie fix if you check my Bad Movie page first and see if I’ve already reviewed the film you have in mind. Here is the link: https://glitternight.com/bad-movies/ 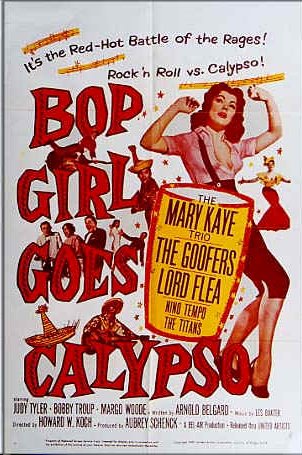 BOP GIRL GOES CALYPSO (1957) – Category: Bad, youth-oriented 1950s movie that is incredibly campy.      In the late 1950s there was a brief flurry of films implying that Rock and Roll was a dying fad. Some producers of those films were backing a musical style they felt would become “the next hot trend” in popular music, in this movie’s case, Calypso. My favorite line: “Rock and Roll is yesterday! Calypso is where the money’s at now!”

Most of the action takes place at a END_OF_DOCUMENT_TOKEN_TO_BE_REPLACED

Comment: Not only is Galveston one of the most interesting cities in the western states, but it’s the island home of one of the coolest-named college sports teams imaginable! As always I’m a sucker for teams whose names reflect the character and history of their region and Whitecaps qualifies on multiple levels. Not only is the END_OF_DOCUMENT_TOKEN_TO_BE_REPLACED