Some of my e-mailers have been suggesting teams for my Cool-Named Team Of The Day spot that have already been featured. To keep past Cool-Named Teams in one convenient location I’ll move their entries here after a suitable time.

Comment: Florida teams sport some of the coolest names in the country and Southeastern University is no exception. That logo looks great as well!

Comment: These are no dumb clucks, these are Sagehens! (Sorry!) With this institution we get another classic example of what I consider to be the “oddball cool” of many college team nicknames.

Comment: No, their mascot isn’t a crying U.S. Senator standing in falling snow, it’s the fish called Muskies. Muskingum’s nickname and logo combine to give their teams that “oddball cool” feel that I love about so many college sports teams.

Comment: What a terrific name for sports teams! At first glance the logo might make you think they were called the Sharks instead, but I love the shark imagery because it reminds me of one of my favorite figures in Hawaiian myth: Kamoho, the shark god. He’s the chief of the seemingly dozens of lesser shark deities in the Hawaiian Islands. Part of the fun comes from the fact that Kamoho is the older brother of Pele, the goddess of fire!

THE COOLEST HELMET IN THE DAKOTA ATHLETIC CONFERENCE

Here’s a new feature to help all of us get in the mood for football season! I’ll be going through the NAIA and NCAA Division 3 conference by conference and looking at the coolest helmets in each.

Comment: “Up and at’em….Atom Ant!” The Black Hills State helmet sports one of those mascots who are so cool-looking they should have their own cartoon series!

As always, football helmets courtesy of The Helmet Project at: http://www.nationalchamps.net/Helmet_Project/

Comment: In the opposite of what you might think, it’s the women’s teams that are called the Gold Nuggets while the men’s teams are the Gold Rush. An interesting fact is that since 1996 the Gold Nuggets basketball team has fewer home losses than Pat Summit‘s Lady Volunteers!

Comment: “If it isn’t Scottish IT’S CRAP!”  As cool as Carnegie Hall and Mellon Bank are separately, like peanut butter and jelly they just get better when combined in their respective namesakes’ university. And as a bonus here’s their incredibly cool football helmets courtesy of The Helmet Project at http://www.nationalchamps.net/Helmet_Project/

Comment: Many people don’t realize some Canadian schools play various college sports in America’s lower divisions. I don’t know anybody who doesn’t like pandas unless they were traumatized by the long national nightmare we had trying to get the National Zoo’s panda bears to mate. The men’s teams at Alberta go by the name Golden Bears but since so many teams are called Golden Bears I’m going with the much cooler name the women’s teams use.

Comment: Like the Banana Slugs, the Gorloks have gotten so much exposure for their unique nickname I didn’t include them in my original D3 20 Coolest list. Here they are at last, and if you haven’t heard, the Gorlok is a mythical creature invented in a contest at Webster U. It has the paws of a speeding cheetah, the horns of a fierce buffalo and the face of a dependable St Bernard. I would have thought the Webster mascot would have the height of Emmanuel Lewis, the stocky shoulders of Alex Karras and the wall-eyes of Susan Clark, but I’m kind of weird

THE COOLEST HELMET IN THE ATLANTIC CENTRAL FOOTBALL CONFERENCE

Comment: It’s the return of the Coolest Helmet feature! NNAS has one of the most eye-catching helmets in D3. In fact when they wear their maroon jerseys and the gold pants their entire uniform looks 1A-caliber! The Builders’ motto is “We build great ships: Craftmanship … Scholarship … Leadership” If you’re wondering why, if they build great ships, they’re not called the Shipbuilders instead, well, just say it out loud a few times and you’ll see the potential minefield they’re avoiding.

Comment: Get it? The Bells Of Saint Mary’s becomes “The Belles Of Saint Mary’s” for this female institution’s sports teams, just as it became The Bells Of Saint Berwyn in a memorable Son Of Svengoolie comedy sketch. This school should use a mascot like a woman in a Belle Of The Ball outfit kung-fu fighting her way through a line of suitors. It’s got a classical yet contemporary appeal that would ring the chimes of Belles fans everywhere!

THE COOLEST HELMETS IN THE SOUTHERN COLLEGIATE ATHLETIC CONFERENCE

Comment: If you can’t make it out that’s a sword going through the “M” on the helmet. I love the helmets and the name Majors is pretty cool, too, just ask Lee Majors. The Majors pretty much redefine the term “ranked team” along with those teams called the Generals, the Colonels and the Captains.

Comment: The Banana Slugs have been the Gold Standard for unusual team nicknames for so long I even included a note in my D3 20 Coolest List saying why I was leaving them off. For all their fans who were wondering, here they are at last! And it takes more than table salt to stop THESE slugs!

Comment: Remember this exchange in Aristophanes‘ comedy The Frogs – Question: What do you expect a poet to do? Answer: Why, save the nation, of course! We won’t be putting that much pressure on the Whittier teams, thankfully. It would be easy to go the cheap joke route and say something like “What’s the matter? Was the nickname The Ballet Dancers already taken?” But I actually think poets are pretty cool – just ask Francois Villon!

Comment: As the nickname Vixens would imply this is an all-female institution. (For those who don’t know a vixen is a female fox). Really cool name for sports teams and their colors are pink and green so that’s pretty cool, too!

THE COOLEST HELMETS IN THE KANSAS COLLEGIATE ATHLETIC CONFERENCE

Comment: Yes, as a “Confidential Source” revealed to Balladeer’s Blog back when I did the 20 Coolest College Sports Logos, Tabor has gotten rid of the boring “TC” helmets and brought back an even cooler version of the Bluejay profile helmets! These things are great looking and are guaranteed to produce additional wins all by themselves!

Comment: In the grand tradition of the A-Team, G-Forces and the X-Men it’s the V-Hawks, a name so cool it could be a model of sports car!

Comment: The Diplomats (“Oh, that word”…Fans of the musical 1776 will get it.) is a pretty cool nickname for sports teams. I guess the only real downside would be people calling them “The Dips” for short. By the way, from now on I’ll be judging U.S. State Department Diplomats by whether or not they “give 110 percent” and if they “came to play”, just like I judge Franklin and Marshall Diplomats.

Comment: This school’s teams have got a butt-kicking nickname, a butt-kicking logo and I’ll let you go ahead and insert your own High Chaparral joke here. Bonus points for the best use of Blue Boy‘s wimpiness in your wisecrack.

Comment: After indulging myself with a High Chaparral joke with LCU earlier this month I’ll refrain from making either a groan-inducing Bill Haley OR Hale-Bopp reference and just ask you which Comets football helmet you think is cooler -the old-school one on the left or their latest one on the right.

As usual you can contact me with your opinion at Thtcom15@aol.com
Football helmets courtesy of The Helmet Project at http://www.nationalchamps.net/Helmet_Project/

Comment: Gee, do you think the X-Men and the Fantastic Four ever get jealous that the Defenders have sports teams named after them? (Marvel Comics geeks will get it)

Comment: I’ll bet everyone affiliated with this university wishes they had back all the moments from their life spent explaining “No, it’s HILL-cats, not hellcats”! Just to really confuse people the Rogers State University marching band should start doing a rendition of the theme song from the bad biker movie Hellcats. (bad movie buffs will get it)

Comment: I guess after rejecting names like “flying turtles” and “swimming kitty cats” as being too odd-sounding common sense prevailed and the good people at Life decided on the nickname Running Eagles for their sports teams. 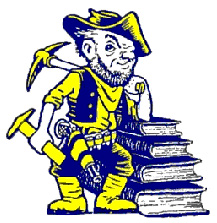 Comment: You know sports teams must be good when they have so many Cafes named after them! (Just be glad I didn’t go with the “Hardrock, Coco and Joe” reference I originally had planned.) What I really want to know is if their marching band does a rendition of Sixteen Ton.

Comment: To cut the sports world’s equivalents of The Comic Book Guy on the Simpsons off at the pass, I’m aware that Division 1 has the UMKC Kangaroos and Division 3 has the Austin ‘Roos but this is a site for NAIA sports, comprende? The preceding is intended to cover up the fact that I couldn’t think of any kangaroo-related jokes. Doesn’t that make you hopping mad? (Sorry.)

For the NAIA edition of The 20 Coolest College Sports Teams You May Never Have Heard Of click here: https://glitternight.com/2010/06/21/the-20-coolest-named-college-sports-teams-you-may-have-never-heard-of-naia-edition/