And the laughs continue here in the U.S. as the outrightly insane Trump-haters pretend that a 90 day ban on immigration from just SEVEN nations is deserving of all these drama queen antics. Yes, people, it’s TEMPORARY and it’s a type of action that plenty of previous presidents INCLUDING OBAMA have taken.

The crazed American media have made all of us realize what it is like to live in countries that have politically controlled news outlets that are pure propaganda – in our case propaganda for the Democrats.

But according to those sacred “polls” that Left-wing Archie Bunkers live by only 33% of Americans disapprove of Trump’s common-sense action. Looking at our incredibly biased – indeed RABID – news outlets you could get the impression that the reverse was true.

The people foaming at the mouth over this action are the same people who fall to pieces over EVERYTHING Trump does. They don’t care that the nation supports common-sense moves like this and that – more importantly – the voters elected Trump to take these common-sense actions.

(And have you noticed that Democrats have taken to pretending they are being “patriotic” and “American” by opposing this? Just like Republicans usually hide their most repulsive actions inside claims of “patriotism” and such.) END_OF_DOCUMENT_TOKEN_TO_BE_REPLACED

Too late Edison learned the awful price to be paid for repeatedly asking if his bikini made him look fat.

PART ONE – After the Martian invaders from H.G. Wells’ War of the Worlds and Serviss’ own Fighters From Mars died from exposure to Earth germs, astronomers around the world realized the ordeal wasn’t over yet. All indications were that the Martians were readying another fleet of spaceships to attack the Earth. CLICK HERE

PART TWO – Thomas Alva Edison reverse-engineered the Martian space craft. The nations of the Earth then banded together to build an entire fleet of similar vessels and take the war to the Red Planet. President McKinley, Queen Victoria, Kaiser Wilhelm and other heads of state from around the world attend the global summit. CLICK HERE

PART THREE – After a monumental effort the Earth has a space-fleet of its own, equipped with Edison’s Disintegrator Rays as weaponry. With Edison commanding the flagship and with military men and scientific geniuses from around the world as an officer corps the Earth Fleet departs the Earth. CLICK HERE    END_OF_DOCUMENT_TOKEN_TO_BE_REPLACED 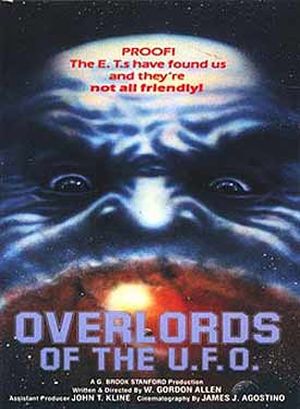 REMEMBER THIS FLICK FROM THE 2010 BALLADEER’S BLOG FILM FESTIVAL?

OVERLORDS OF THE UFO (1977) – Category: Hilariously lame “documentary” about conspiracies, the paranormal and/or the supernatural    This little honey comes from the muck and slime encrusted bottom of the cinematic barrel of movies that followed in the wake of the ridiculous Chariots Of The Gods.

None of these schlockumentaries are very convincing about their subject matter but this flick is so outrageously inept that not even the Ancient Aliens team would be suckered in by it … maybe.

RATIONAL PEOPLE WEIGH IN ON TRUMP

Well, George Soros stated he would finance the largest phony “protest” crowds money can buy and that bloated rich pig obviously meant it. Supporters of California’s president Hillary Clinton have been such crazed and hysterical fools it helps you keep perspective by mentioning public figures who are rational about United States President Donald Trump:

MARTIN LUTHER KING III – King met with Donald Trump on the holiday marking his father’s birthday. Like the other African American figures who have met with Trump, MLK III stated he believed the new President is sincere and would work with him.

This enraged Left-Wing Archie Bunkers, who thrive on promoting race-hatred. Fake News channel CNN tried to bait King into criticizing Trump but he skillfully parried their every attempt. It was beautiful to see! 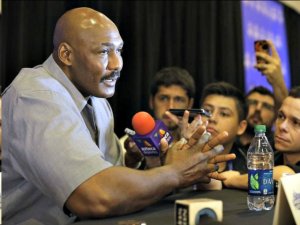 KARL MALONE – In regard to the absurdly paniced and overwrought public displays that Trump haters are humiliating themselves with, Karl Malone recently said “And I tell everyone out there that wants to protest and do all that, other countries are laughing.”  Too true.

Malone added additional mature perspective by addressing the way people were bothered by some of Trump’s language and statements on the campaign trail, but he said that the sum of a man is more than the language he uses in a moment or the statement he makes on a given topic. He stressed that people have to have enough respect to take time and get to know the man.   END_OF_DOCUMENT_TOKEN_TO_BE_REPLACED

JUST IMAGINE was one of those true oddities that make bad movie culture so much fun.

This uproariously campy sci-fi relic started with a comparison of life in America in 1880 and 1930, the year the movie was released.

From there it provided a speculative tale about life 50 more years in the “future” of 1980. The lame special effects, failed predictions about the future, typically stiff acting for a 1930 effort and – worst of all – a few unbearable SONGS make this a true Bad Movie Classic deserving of a Plan 9– sized cult following.   END_OF_DOCUMENT_TOKEN_TO_BE_REPLACED

Islam is the most misogynistic, homophobic and otherwise intolerant religion in the world at this particular time. And the way Islam insists on marrying religion to government makes it a fascist and totalitarian movement that needs to be opposed loudly and daily. Muslim Violence Awareness Year continues with this look at just a FEW of the most recent atrocities by Muslims.

January 28th: Paris, France – Police released a report stating that in 2016 Muslim gangs committed OVER TWO HUNDRED attacks on Chinese immigrants to France, accusing them of becoming “too wealthy.” Uh, yeah, Muslim fascists, those Chinese immigrants have shown you that it’s amazing what you can do if you immigrate with peaceful intentions and don’t spend your lives killing and raping and pushing your savage superstitions on others.

Origin: While working the fields on a farm in the mid-western United States, Tom Kenny was scooped up and carried aloft by a freak cyclone. After several hours of exposure to the elemental windstorm the man finally dropped into a town he did not recognize.

In addition to granting Tom superpowers the mysterious storm caused him to lose much of his memory outside of his first name. He could not recall where he was from or who his relatives were or if he had known anything about the odd cyclone. Adopting the last name Kenny the amnesiac wandered from town to town and city to city trying to learn about his past.

During his quest he would battle any evils that he came across under the superhero name Tornado Tom.

LIBERALS AND CONSERVATIVES AND “THE OTHER”

Balladeer’s Blog remains the only site on the web that criticizes American Liberals and American Conservatives equally. Here’s another quick hit.

Liberals always assume that “the other” is automatically in the right, no matter how outdated, racist or misogynistic those “others” may be.

Conservatives always assume that “the other” is automatically in the wrong, as a reflexive reaction to the over-the-top praise that Liberals insist on bestowing on everyone they deem to be “others.”

THE ADVENTURES OF A MICRO-MAN (1902) VINTAGE SCIENCE FICTION 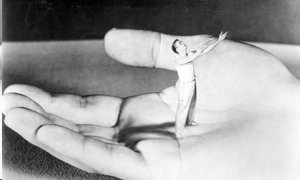 THE ADVENTURES OF A MICRO-MAN (1902) – This work of vintage or “ancient” science fiction was authored by Lancelot Bayly under the pen name Edwin Pallender. The central character of the story was Doctor Geoffrey Hassler, a wealthy eccentric scientist who has discovered “microgen” a gas which shrinks objects down to a very small size.

Dr Hassler’s demonstrations of the procedure in a diving-bell shaped chamber convinces even the skeptics and he rakes in even more money plus scientific recognition. One day when he, his daughter Muriel, her fiancee Gerald and a family friend named Reverend Eden are all inside the chamber a fluke accident causes them all to be shrunk down to a fraction of an inch.

Nobody was around to witness the accident so the quartet are trapped at tiny size for approximately 10 days, when the microgen treatment will wear off and they will return to normal. In their struggle to survive they manage to escape the chamber and make their way to Dr Hassler’s garden which – at their current size – is like a vast, dangerous jungle to them. Knowing they need food and water the group has no alternative but to venture forth. END_OF_DOCUMENT_TOKEN_TO_BE_REPLACED