EPISODE ORIGINALLY BROADCAST: Saturday May ??, 1987 from 10:30pm to 1:00 am. Exact date is still being debated. Any Vaulties with further information please feel free to contact me.

EXTRAS: Every single nanosecond of this film is riff-worthy, so with the usual comedy sketches from the Film Vault Corps (“the few, the proud, the sarcastic”) added on plus commercials there was no time for an episode of a Republic or Columbia serial before the movie this time. Randy and Richard, our machine-gun toting Film Vault Technicians First Class were able to get to the movie quickly.  END_OF_DOCUMENT_TOKEN_TO_BE_REPLACED

SO-CAL DIVISION: PLAY-IN ROUND – GAME ONE – The game of the day yesterday was this classic of the diamond played between the 17th seeded EL CAMINO COLLEGE WARRIORS and the 16th seeded MOUNT SAN ANTONIO COLLEGE MOUNTIES. After two scoreless Innings the Warriors put up a run in the top of the 3rd with the Mounties eventually tying things up in the bottom of the 6th. El Camino College responded with another run of their own in the top of the 7th Inning and rode that ball to a 2-1 victory. Credit Andrew Burschinger with the win.

SO-CAL DIVISION: PLAY-IN ROUND – GAME TWO – This game pitted the 15th seeded EAST LOS ANGELES COLLEGE HUSKIES against the 18 seeds – the COLLEGE OF THE CANYONS COUGARS. The Cougars took a 2-0 lead in the top of the 2nd Inning but by the bottom of the 3rd the Huskies had tied the game up. In the 5th and 7th Innings College of the Canyons logged a pair of runs to make it a 4-2 Cougar advantage. In the bottom of the 7th East Los Angeles College again knotted up the game. After the Cougars went on top again 5-4 in the top of the 8th the Huskies used their half of the Inning to take their first lead of the game at 6-5, which turned out to be the final score, too. East L.A.’s closer Shawn Kennedy got the win.  END_OF_DOCUMENT_TOKEN_TO_BE_REPLACED 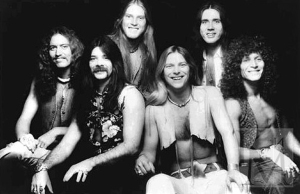 The Frontierado holiday is just a little over 3 months away so here is the first related post for the calendar year. As the Lifetime Commissioner of Frontierado I am empowered to designate an Official Band for that greatest of all holidays! In keeping with my blog’s theme of emphasizing those things which are neglected I’ve named Black Oak Arkansas as the Offical Band of Frontierado. Headed by legendary front man Jim Dandy, whom David Lee Roth always pointed to as a huge influence, this country-rock/ r&b band thoroughly kicked ass. Click here for a quick (3 minute) representation of the group’s sound:

KANSAS COLLEGIATE ATHLETIC CONFERENCE – Tomorrow the KCAC will throw out the first pitch in their 2014 conference tournament. The league’s 4th seeded BETHANY COLLEGE SWEDES will do battle with the 5 seeds – the UNIVERSITY OF SAINT MARY SPIRES – in the only game of the day in that conference.

SOUTHERN STATES ATHLETIC CONFERENCE – Meanwhile in the SSAC the 2nd seeded BREWTON- PARKER COLLEGE BARONS will square off against the 7th seeded UNIVERSITY OF MOBILE RAMS   ###   The top seeded FAULKNER UNIVERSITY EAGLES will be up against the 8 seeds – the AUBURN UNIVERSITY AT MONTGOMERY WARHAWKS (formerly the Senators).  END_OF_DOCUMENT_TOKEN_TO_BE_REPLACED

LELWANI – The goddess who ruled over the subterranean land of the dead and was thus answerable to Kumarbi, the deity who ruled over all of the undergound realms. Charnel houses and mausoleums were sacred to her. END_OF_DOCUMENT_TOKEN_TO_BE_REPLACED

THE NATIONAL IMBECILE: LITTLE BARRY OBAMA DOESN’T EVEN RECALL WHAT ‘THE OBAMA DOCTRINE’ IS

“This president stuff is MUCH harder than getting D’s in college was!”

It’s official – Barack Obama is dumber than Sarah Palin on her worst day. Remember the fun we all had laughing when Vice Presidential candidate Palin proved incapable of adequately explaining the Bush Doctrine back in 2008? Well, the weak, inept and crooked little man named Barack Obama proved he can outdo THAT! Little Barry today proved incapable of recalling, let alone explaining, HIS OWN DOCTRINE!

Anyone who wants to check that can search it out online and use their own preferred website. I always say to do that with items like this because there is no point linking to a site – American Liberals and American Conservatives are such fanatics they refuse to believe anything that appears at a website not of their own choosing.

Knock yourselves out, people! This pathetic little man is one enormous joke. “Period” as Little Barry himself said when he was lying about people being able to keep their doctors under Obamacare. END_OF_DOCUMENT_TOKEN_TO_BE_REPLACED

SUPERMODEL M*E*T*A*L SAYS: “ALL MY MEN READ BALLADEER’S BLOG … OR THEY READ NOTHING AT ALL”

M*E*T*A*L: A beautiful, brainy and butt-kicking fan of Balladeer’s Blog.

With apologies to English Leather, M*E*T*A*L makes a very persuasive argument that readers of Balladeer’s Blog are the sexiest and most intelligent readers on the internet. FOR MORE CLICK HERE: END_OF_DOCUMENT_TOKEN_TO_BE_REPLACED

The Kentucky Intercollegiate Athletic Conference baseball tournament for 2014 came to an explosive end yesterday with a guaranteed berth in the NAIA national tournament on the line.

It’s the hottest cable series this side of The Walking Dead! Twenty-First Century Golem deals with the adventures of Jewish mythology’s creature the Golem set in the world of today. Last night was the first time it aired on its new night – Saturdays.  END_OF_DOCUMENT_TOKEN_TO_BE_REPLACED

The top-seeded POINT PARK UNIVERSITY PIONEERS stayed perfect in tourney play in the Kentucky Intercollegiate Athletic Conference yesterday. The Pioneers clashed with the usually lethal 3 seeds – the INDIANA UNIVERSITY SOUTHEAST GRENADIERS – who picked a bad time to have one of their worst days ever. Point Park eviscerated IUS by a final talley of SEVENTEEN to FOUR. Luckily for the Grenadiers baseball plays a double- elimination tournament so they remain alive. END_OF_DOCUMENT_TOKEN_TO_BE_REPLACED