Yes, Muslim Violence Awareness Month comes and goes each year but Muslim violence goes on and on. It’s no secret that Islam is the most homophobic, misogynistic and otherwise intolerant religion in the world at this particular point in history. It’s no secret but it needs to be pointed out daily and loudly. Islam hates human freedom. Period. And Islam’s Kapos in the “academic” and political world are happy to run interference for Islam.

Here’s a look at some of the recent acts of violence in the name of the Religion of Rape, Slavery and Hatred:

Individually the ladies of this real-life League of Extraordinary Women have all been featured over the years here on Balladeer’s Blog. Each one of them has more courage than all of the make-believe feminists whining about “microaggressions” and “safe spaces” on college campuses across America.

These ladies face REAL danger from REAL oppressors of women. 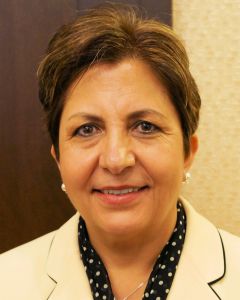 *** WAFA SULTAN is an author and activist against Islamofascism. She writes first-hand about the barbaric and systematically demeaning treatment that women in the Muslim world are subjected to.

Wafa is one of those courageous individuals who are needed the most at this time – the kind who demand to be heard no matter how dangerous it is for them personally. In 2006 Wafa was the first  woman on the Muslim propoganda channel Al Jazeera. She masterfully demolished the inept reactionary arguments of the Imam she was debating.
END_OF_DOCUMENT_TOKEN_TO_BE_REPLACED

Even for the bizarre sub-genre of Brucesploitation films this movie is out there! The film starts with the recently – deceased Bruce Lee arriving in the afterlife, where the concubines of the King of the Dead gather around to gawk at the bulge in the pants of the late martials arts superstar. (Just in case you thought NO opening could be more tasteless than the one in The Clones Of Bruce Lee ) In a bit of alleged comic relief the bulge turns out to be caused by a weapon, not Lee’s organ. (Corpse schlong jokes! Who doesn’t love them?)

As head-shaking as that bit is at least it’s coherent, unlike virtually everything else that happens from this point on in the movie. And the time-honored tradition of Brucesploitation films having END_OF_DOCUMENT_TOKEN_TO_BE_REPLACED

As Muslim Violence Awareness Month continues adherents of Islam, the Religion of Rape, Slavery and Intolerance are flooding Europe in a way that makes the old novel The Camp of the Saints look understated. Accordingly, rapes committed by the arriving Muslim males are skyrocketing.

But in Germany, political figures are cautioning their own residents that – as usual – Muslim Privilege is the order of the day. When the Muslims begging for asylum show their gratitude to the nations saving them by raping women it’s not the Muslim rapists who are publicly stated to be the problem. Nope. It’s the women’s fault.

In the town of Pocking political authorities are advising women against wearing revealing outfits in public – EVEN ON THEIR WAY TO WORK OUT AT THE GYMNASIUM – to avoid unwanted attention and attacks from Muslim males aka “the rapin’ refugees.”

In Die Welt newspaper a German politician was quoted as saying that “when Muslim teenage boys go to open air swimming pools they are overwhelmed when they see girls in bikinis.” Anything to excuse Muslim savagery. Another RAPE CULTURE that I don’t expect the cowardly hypocrites of the western world will be talking about any time soon.

Germany’s newspapers, showing initiative lacking elsewhere, uncovered Muslim rapes that authorities have been sitting on since June to prevent citizens from getting  justifiably upset with the Religion of Rape. Germany may have its own version of THE ROTHERHAM REPORT soon.    END_OF_DOCUMENT_TOKEN_TO_BE_REPLACED

NUMBER THREE GOES DOWN – Yesterday the NAIA’s BENEDICTINE COLLEGE RAVENS welcomed the number 3 team in the nation – the BAKER UNIVERSITY WILDCATS. This game was one for the ages as the Ravens managed a hard-fought 35-31 upset of the Wildcats. Benedictine College was ranked 18th two weeks ago, then fell from the rankings last week and this win will put them right back in again.

WASPS STING DIVISION ONE – The NCAA Division Three team the EMORY & HENRY COLLEGE WASPS took it on the road to face NCAA Division ONE’s EAST TENNESSEE STATE BUCCANEERS. The Wasps trailed 14-7 in the 1st Quarter and 17-14 at Halftime but came back for a 20-17 lead to end the 3rd Quarter. The teams exchanged Touchdowns in the 4th for a shattering 27-24 toppling of the D1 Buccaneers. Emory & Henry QB Kevin Saxton threw for 244 yds and 1 Touchdown.  END_OF_DOCUMENT_TOKEN_TO_BE_REPLACED 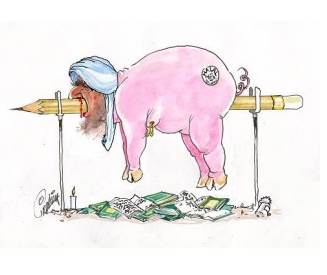 Muhammad as a pig, the way he deserves to be remembered!

What kind of savages kill people for drawing pictures they don’t like? I think we all know. It was ten years ago today that the most notorious round of Muhammad cartoons were published in Copenhagen. Even though Muhammad had been depicted in Western art for centuries the courageous cartoonists in Denmark had rightly noted that in recent years the West had gotten very, very squeamish about drawing the figure and, ignoring threats, published cartoons of Islam’s founding figure. 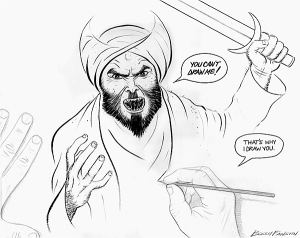 We all remember the bloodshed that followed as the savage superstitions of Islam drove plenty of its adherents to kill and kill and kill because of cartoons … BECAUSE OF CARTOONS.

Muslims like to claim it is an insult to Muhammad to depict him and so they turn barbaric. Even though various Muslim demagogues claim that Muslim terrorist attacks are perversions of Muhammad’s teachings they are never moved to huge public demonstrations of outrage over those terrorist attacks. But cartoons get them every time.

So, to the savage fascists of Islam I will once again say: WE’RE HERE, WE’RE THE TWENTY-FIRST CENTURY, GET USED TO IT.

WE ARE NEVER GOING TO STOP WITH THE PICTURES OF YOUR BLOOD-SOAKED “PROPHET.” NON-MUSLIMS ARE FREE PEOPLE AND WILL NEVER LIVE ACCORDING TO YOUR SAVAGE BELIEF SYSTEM.

The cowardly enablers of Muslim violence have forfeited freedom of expression because of their fear of that violence. The hypocrites like to pretend their spinelessness is “cultural sensitivity” yet they ridicule other faiths relentlessly. See the stage comedy The Book of Mormon for instance. END_OF_DOCUMENT_TOKEN_TO_BE_REPLACED

Balladeer’s Blog continues its examination of this epic myth of the Nyanga people.

One day six of Chief Shemwindo’s seven wives gave birth. Their babies were female, thus saving the child from the villainous chief’s threat to kill any male child. Only the preferred wife remained pregnant and as her pregnancy dragged on she became the object of hushed whispers and ridicule from the Tubondo villagers.

One morning the preferred wife woke up and was prepared to go fetch her firewood when she noticed an entire pile of it was already waiting for her inside her hut. She was puzzled by this but did not yet know that Mwindo -her unborn, semidivine male child – had slipped out through her vagina while she slept, gathered the firewood and climbed back into her uterus before she woke up. END_OF_DOCUMENT_TOKEN_TO_BE_REPLACED 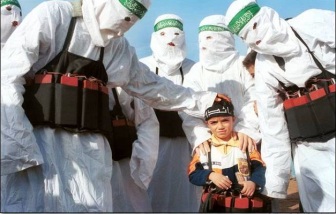 “First we rape them, then we use them as suicide bombers!”

The Muslim custom of raping little boys – called bacha bazi , aka “Obama’s Orders” – has been in the news as much lately as their usual habit of raping and beating women. Although Sweden’s announcement that the rate of Muslim men raping non-Muslim women has increased a thousand-fold in recent years is incredibly scary.

The Religion of Rape is coming to a neighborhood near you since Muslim nations like Turkey, Saudi Arabia and others refuse to take ANY of the refugees flooding Europe. And as the world has seen – to Muslims “tolerance” means you avoid offending their savage superstitions … OR ELSE.

But rape is just one of the MANY forms of Muslim violence. Here’s a small sampling of other handiwork by the most intolerant and violent religion in the world at this particular point in history.

September 21st – In Rastan, Syria 7 men were executed FOR BEING GAY. END_OF_DOCUMENT_TOKEN_TO_BE_REPLACED

AMERICAN KAIJU: THE AMAZING COLOSSAL MAN VS THE SIXTOPUS 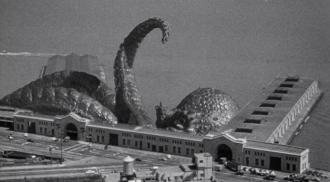 Episode Four  of cult director Eddie Wozniak’s hot new cable show airs tonight. This time around Glenn Manning, the Amazing Colossal Man, is summoned from his Area 51 home to save San Francisco from a gigantic six-tentacled sea creature called the Sixtopus (sic). This sea-beast first appeared in the film It Came from Beneath the Sea (1955).  END_OF_DOCUMENT_TOKEN_TO_BE_REPLACED