DEMOCRAT ANDREW YANG ON HOW DEMOCRATS HAVE BETRAYED THE WORKING CLASS 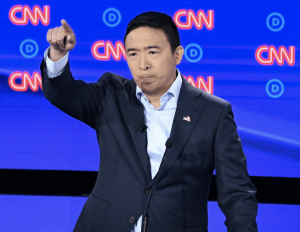 Andrew Yang, former candidate for president, has joined the chorus of voices pointing out how the Democrats have abandoned and driven away the working class and the poor of all colors.

Yang pointed out that the Democrats’ snobbery and contempt for working class voters was why he entered the presidential race in the first place, to try to bring the party back to its long-abandoned base.

“This is why I ran. When I went around to Democrats – actually, no, not Democrats – working-class Americans across the country, if you have a ‘D’ next your name, it’s like a Scarlet Letter. Like they do not [let] Democrats speak to them,” Yang explained. “I was talking to truck drivers and waitresses and I was like, theoretically, aren’t you who the Democratic Party should be speaking to and standing up for? But they thought the Democratic Party wanted nothing to do with them. And that, to me, is a real problem with the Democratic Party.”

Andrew Yang has a point, of course. The Democrats can barely conceal their disdain for the working class and the poor. Democrats are incredibly out of touch with the voters and have been for quite some time.

In stark contrast to the callousness and snobbery of the Democrats is de facto Third Party President Donald Trump, who has done more to help the working class and the poor of all colors than any other president in my lifetime.