A nauseating demagogue who racially profiles every white person he meets.

Welcome back to Balladeer’s Blog, coming to you from an America where Al Qaeda has Barack Obama on the run and where that same Obama has callously turned his back on Detroit. (Since last year was an election year Barry pretended it was only his political opponents who would dare do something so unfeeling, but now that he no longer needs votes the repulsive piece of political sewage from the cesspool of Chicago politics figures Detroit can burn!)

Join me as I once again trash both Liberals and Conservatives.

It’s no secret that American Liberals are hilariously pretentious asses. Just as American Conservatives have hopelessly politicized the word “patriot” to the point where it’s meaningless, American Liberals have hopelessly politicized the word “intellectual” to the point where it is meaningless, too. Conservatives will END_OF_DOCUMENT_TOKEN_TO_BE_REPLACED

LIBERALS AND CONSERVATIVES ARE THE EXACT SAME KIND OF PEOPLE 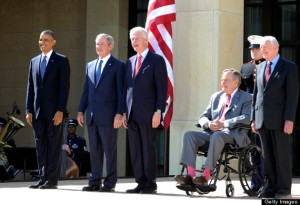 The ruling class enjoying a moment together far from the chaos they’ve mired the rest of us in.

This week we got another reminder that the Democratic and Republican party office-holders consider themselves “the ruling class” and the rest of us mere peasants. In Congress there was at last some bi-partisan cooperation – BOTH parties now admit what a disaster Obamacare is and introduced legislation TO EXEMPT THEMSELVES AND THEIR STAFF MEMBERS FROM IT!

If Obamacare is so wonderful why do they want exempted from it themselves and why do they feel it will attract quality employees to their staffs to have the PERK of being exempt from it? Sounds like those demagogues hate Obamacare as much as the rest of us do and as much as EVERY doctor that I and everyone I know has spoken to hate it.

Let’s look at other reasons why Liberals and Conservatives are the same kind of people:

Liberals think they are the country’s official “intellectuals” and that they possess “the one true world view”. They feel that this qualifies them to use the apparatus of government to rule every aspect of our lives. Dissenters from this view are so routinely labeled “racists” and/or “uneducated” that such labels have become virtually meaningless.

Conservatives think they are the END_OF_DOCUMENT_TOKEN_TO_BE_REPLACED

Welcome back to Balladeer’s Blog, the only site on the web that equally criticizes those childish fanatics called Liberals and Conservatives. Here’s some Yuletide advice for those two groups of zealots who continue to tear the country apart by putting their respective political parties ahead of the nation.

ADVICE FOR LIBERALS – Pretend these Conservatives you irrationally hate END_OF_DOCUMENT_TOKEN_TO_BE_REPLACED

WHY AMERICAN LIBERALS AND CONSERVATIVES ARE EQUALLY ANNOYING

“First George W Bush and now ME! You people will reelect ANYBODY!”

Welcome back to Balladeer’s Blog, the only site on the web that is truly nonpartisan in its criticism of the walking caricatures called Liberals and Conservatives.

Like other adults here in the U.S. my own views are a mix of “liberal” and “conservative” attitudes. That’s why the rest of us find Liberals and Conservatives (with capitalized L’s and C’s) to be so outdated and laughably partisan. Enough preamble, here’s a list of some of the reasons we despise American Liberals and American Conservatives equally:

LIBERALS AND CONSERVATIVES AND OVERREACTING TO ELECTION RESULTS

Two fools who prove that ANYBODY can get reelected and it doesn’t prove they are competent.

Part of the fun involved in the week following any election is laughing at the ENORMOUS overreaction of Liberals and Conservatives to the outcome. The winning side will claim a “mandate”, no matter how slender their lead in the popular vote, and this year it was only a few million votes. Not the least bit impressive in a country this size, is it? Especially not for a president who LOST millions of votes from 2008. The losing side will wail and gnash their teeth and pretend the outcome proves that the voters are “stupid” (pretentious Liberal asses) or “Communist” (nationalist Conservative asses).

As an Independent Voter here in the United States you get to see this all the time. In 2004 when the detestable George W Bush was reelected American Conservatives were pretending it meant he “was a great president” and that he’d been “vindicated by history.” It meant no such thing of course and the fact that little Barry “The Destroyer of The Economy” Obama got reelected also does not mean he’s been END_OF_DOCUMENT_TOKEN_TO_BE_REPLACED

LIBERALS AND CONSERVATIVES AND PUNDITS

Welcome back to Balladeer’s Blog, the only Independent Voter site on the web that bashes Liberals and Conservatives equally. Only the most fanatical Liberals and Conservatives are still denying that every single news outlet is completely biased, either in favor of the left or the right. The political prejudices of every single “news” source are blatantly obvious and are as much fun to laugh at as bad movies are. REMEMBER: EVERY SINGLE NEWS SOURCE HERE IN THE U.S. IS JUST A LIBERAL PROPOGANDA OUTLET OR A CONSERVATIVE PROPOGANDA OUTLET. Here are four of the most laughable examples of American political pundits, two from each end of the political spectrum.

Want to beat Michael Dukakis? Medved’s got the answers!

4. MICHAEL MEDVED – I think it was in Bedtime for Bonzo that Ronald Reagan expressed the Commandment he is best known for: “No bad movie lover shalt attack another bad movie lover.” But since I always felt as much contempt for Reagan as I feel for Barack Obama I’ll just break that commandment.

Michael Medved was coauthor of the two Golden Turkey Awards booklets and of The Hollywood Hall of Shame plus other landmark books for bad movie lovers. Medved even addressed Manos, The Hands of Fate years before it became a cult item in 1993. He was also one of the 1960’s Liberals who (rightly) grew disgusted with his generation’s irrational way of clinging to their increasingly outdated worldview and tiresome racebaiting.

Unfortunately, Medved went too far and became an actual conservative. His radio show is a bastion of hilarious right-wing gibberish and END_OF_DOCUMENT_TOKEN_TO_BE_REPLACED

Two children of privilege who have nothing in common with the rest of us.

Welcome back to the favorite site of Independent Voters, Balladeer’s Blog, as always coming to you from an America stuck with the usual lame partisan fools that the Democratic and Republican Parties will go on sticking us with because of their monopolistic hold on our political system. This year the Democrats are trying to reelect the weak, inept and crooked little man named Barack Obama while the Republicans, rising to the challenge of coming up with a candidate as laughable as Obama, went with the man I like to call “the Republican Walter Mondale” – Mitt Romney.

Since Balladeer’s Blog remains the only site on the web that trashes both Liberal fools and Conservative fools equally I feel uniquely qualified to offer up some campaign slogans for these two repulsive figures. First up I’ll deal with Obama since he’s the incumbent felon, then I’ll handle Romney.

Barack Obama: If shallow, uninformed and emotionally unstable entertainers think he’s fit to govern the nation who are YOU to question their judgement?

Barack Obama: All the ineptitude of Jimmy Carter … all the corruption of Richard Nixon.

Barack Obama: Because the problems of the 21st Century call for 1960’s solutions.