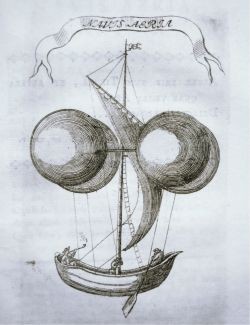 NAVIS AERIA (1768) – By Bernardo Zamagna. Written in 1768 Navis Aeria (“Ship of the Air”) was the Italian Zamagna’s attempt to take concepts we of today would associate with science fiction and present them in the old, quaint format of Epic Poetry.

The verse story detailed a flight around the world in a flying machine which was basically a sailing ship with four huge balloons around the sails and connected to a main mast. Zamagna presciently observed that one day aircraft would constitute “other Argos to carry chosen heroes” on their adventures.

The entire First Canto (Or “Canto the First” as some of the more pompous translations put it) is a poetic glorification of science, mathematics and what we now call aeronautics. As poetry it’s as lame as poetry by the Wright Brothers might have been but as a very early work of science fiction that opening Canto is very moving and ground-breaking, especially the end which excitedly predicts vessels that will one day take human beings to the moon.
END_OF_DOCUMENT_TOKEN_TO_BE_REPLACED 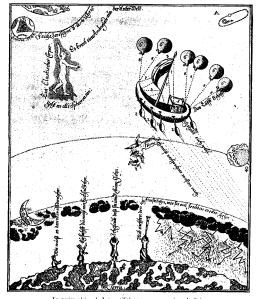 The Air Ship departs the Earth as Fama and the Astral Body look on.

THE SPEEDY JOURNEY (1744) by Eberhard Christian Kindermann. This work of proto-science fiction begins with the fictitious discovery of a moon orbiting the planet Mars over a century before Phobos and Deimos were observed in real life. From there it features a journey through space to reach this celestial body.

The Speedy Journey represents an odd but entertaining fusion of scientific speculation and elements of Christian beliefs. Fama (“Fame”), an actual angel from Heaven heralds the discovery of the fictitious moon of Mars and even sings the public praises of the team of scientists who set out to explore the satellite. In the peculiar fictional world presented by Kindermann in this book the general public takes in stride these visitations from angels who serve as virtual P.R. flacks for men of science.   END_OF_DOCUMENT_TOKEN_TO_BE_REPLACED

PSI CASSIOPEIA, or STAR: A MARVELOUS HISTORY OF WORLDS IN OUTER SPACE (1854) – Written by Dr Charlemagne Ischer Defontenay, a French M.D. and author. Long before J.R.R. Tolkien churned out obsessive amounts of fine detail about his fictional Middle Earth, Defontenay produced this volume of history, poetry and drama from his fictional planets in the star system Psi Cassiopeia.

The narrator of the story is supposedly translating alien documents which he discovered in an artificial meteor that crashed in the Himalayas. The documents were from a planet called (incongruously enough) “Star.”

The system where that planet is located is a three-star system. Ruliel is the large, white star at the center, around which orbit the two lesser stars Altether (green) and Erragror (blue). The planet called Star is orbited by large planetoids/ moons named Tassul, Lessur, Rudar and Elier. Throwing all science to the winds the planet is also orbited by a small red star called Urrias.

Star and its satellites are inhabited except, of course, for Urrias. The translated documents cover a roughly 1,000 year period of events regarding these worlds. The ancient Starian humanoids formed a united world-wide culture which started as an Empire before becoming a socialist planet economically and politically. The documents also claim that their culture boasted beautiful architecture, incredible feats of engineering and awe-inspiring works of art.

At one point a plague swept the globe, reducing the proud Starian civilization to chaos. A Nihilist Cult formed as the plague kept whittling away at the population over the course of years. In the post-apocalyptic ruins the Nihilists formed a fanatical religion devoted to ending all life on Star. The zealots formed armies which exterminated millions of Starians with the intention of taking their own lives when all non-members of their cult had been wiped out. END_OF_DOCUMENT_TOKEN_TO_BE_REPLACED

A FANTASTICAL EXCURSION INTO THE PLANETS (1839): ANCIENT SCIENCE FICTION 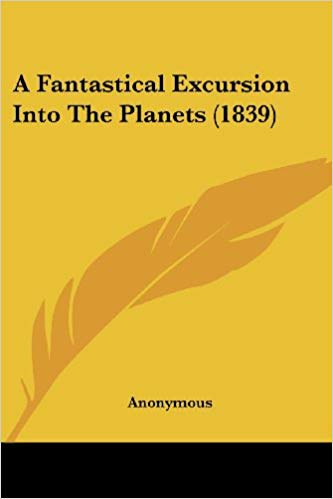 A FANTASTICAL EXCURSION INTO THE PLANETS (1839) – Written by an unknown author. The anonymous narrator of this novel is taken on a visit to assorted planets and other celestial bodies. The figure who transports him is a winged, rainbow-colored sprite whose face and body constantly change slightly, allowing no lasting impression to be made out.

MERCURY – The narrator discovers Mercury to be a sunny but not scorching planet of pleasantly aromatic meadows and trees. The inhabitants are beautiful, angelic creatures of indeterminate gender whose light-weight bodies permit them to virtually float around like feathers.

These beings devote all their time to frolicking, singing and making music on other-worldly stringed and wind instruments that the narrator compares to lyres and flutes. The closest thing to actual labor that the Mercurians do is to cultivate flowers then weave them into chaplets and garlands with which to adorn themselves.

VENUS – Next our narrator and his winged guide visit Venus. This planet is covered with roses, myrtles, amaranths and asphodels plus alien flowers flaunting colors unknown on Earth. The flatlands are all covered in short green grass which smells of lilies and violets. END_OF_DOCUMENT_TOKEN_TO_BE_REPLACED

A MODERN DAEDALUS (1887) – By Tom Greer. No, the title’s not referring to James Joyce’s character Stephen Dedalus (sic) but this tale IS about Ireland. The main character is a young man named Jack O’Halloran, a recent college graduate who returns to his native Ireland.

Jack has dreamed about flying since he was a child and now he uses his genius to create a winged apparatus that can be worn by a single person to take to the skies. Our modern Daedalus flies around at speeds of up to 100 miles per hour with his new invention. Jack is thrilled but complications arise when he shares the news with his father.

Old Man O’Halloran wants to use his son’s winged apparatus to wage aerial warfare against the hated British and thereby win independence for Ireland. Our protagonist doesn’t want his invention used for such a blood-soaked purpose and in the ensuing argument his father throws him out of the house. END_OF_DOCUMENT_TOKEN_TO_BE_REPLACED

THE LUNARIAN PROFESSOR AND HIS REMARKABLE REVELATIONS CONCERNING THE EARTH, THE MOON AND MARS TOGETHER WITH AN ACCOUNT OF THE CRUISE OF THE SALLY ANN (1909) – Written by James B Alexander back in the glory days of titles so long they might not fit in a 140 character limit.

The story is set in 1892, when James Alexander pretends that, while on a fishing trip he encountered a humanoid with a head like a globe, six limbs, large eyes and six wings. The being claims to be a “Lunarian,” a man from our moon.

He is a professor and informs Alexander that he and his fellow Lunarians travel from planet to planet by manipulating gravity. They live in vast underground caverns on the moon, caverns with a breathable atmosphere. Their mastery of gravity is the key to their advanced technology.

The professor’s people have been observing Earth for an untold amount of time. James Alexander even learns that in the distant past humans had to fight intelligently evolving reptiles for planetary supremacy. The cavemen won.

The Lunarians grow vegetation in hydroponic trays and dispose of their dead through a disintegration process that breaks the bodies down into their base elements, thus nothing gets wasted. Though their own culture is socialistic the Lunarians have no shyness about earning profits by selling their advanced technology to other inhabited planets.

The Lunarians have even developed methods of predicting the future. Alexander asks about Earth’s future and the professor from the moon is happy to lay it all out for the Earthling. END_OF_DOCUMENT_TOKEN_TO_BE_REPLACED 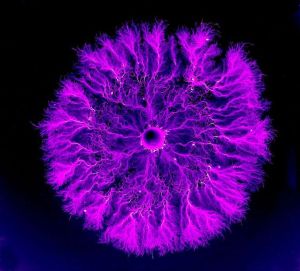 THE PURPLE DEATH (1895) – Written by William Livingston Alden. Presented in the first person this story is narrated by a British gentleman staying in Italy. He becomes friendly with his neighbor, a German M.D. and bacteriologist named Dr Schmidt.

Subsequent conversations reveal that Schmidt is a good old-fashioned mad scientist who has some very odd sympathies. The German doctor sides with Anarchists (among the biggest bogey-men of the 1890s) and his only objection to the occasional assassinations that Anarchists commit is how impractical those crimes are. END_OF_DOCUMENT_TOKEN_TO_BE_REPLACED

A VOYAGE TO THE WORLD IN THE CENTRE OF THE EARTH (1755): ANCIENT SCIENCE FICTION 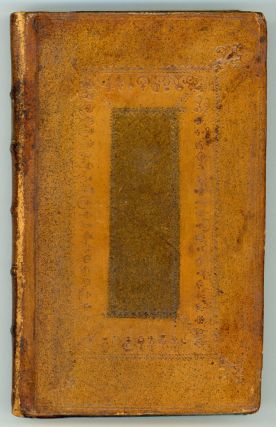 A VOYAGE TO THE WORLD IN THE CENTRE OF THE EARTH (1755) – This intriguing work was published in London anonymously and no author has yet been decisively identified. The novel’s narrator – who remains as anonymous as the book’s author – parties away his inheritance and then ships out for Italy.

Exploring on Mount Vesuvius our hero accidentally falls into what we readers are eventually told is just one of many holes that lead to the interior of the Earth, where another world awaits. A miraculous landing on a haystack saves the narrator’s life but he finds himself unable to move because of the greater gravity of this interior world.

A friendly inhabitant of the inner Earth applies a chemical salve to our protagonist’s body, a salve which allows him to stand up and move about in the higher gravity. A second salve massaged into the narrator’s body renders him capable of understanding and conversing in the language of Inner Earth.

The inhabitants of this interior world dress in silk robes and live to be 200 years old or older. They possess limited telepathy. Precious gems litter the ground but those jewels are meaningless to the Inner Earthers. Their society is partially socialist but with families held sacrosanct and with paternal authority sovereign in each household until the children reach adulthood.

Periodically a King is elected for a lifetime term. Common-sense morality prevails, and ingratitude is especially frowned upon. All of the inhabitants are strict vegetarians, as are the animals so the humans and the beasts interact peacefully.

In addition to the usual above-ground animals, Inner Earth also boasts gigantic birds who are trained to provide air travel throughout the subterranean land. Our hero gets to meet the reigning King in the world capital called Oudentominos.

The King makes him welcome but stresses that visitors are usually encouraged to leave after a year. That custom was set in place when a still-extant colony of British men and women discovered Inner Earth nearly a hundred years earlier and have been causing frequent problems.

During our protagonist’s stay the cantankerous Brits once again come close to mutinying so the Inner Earthers attack them and subdue them. The men are castrated and both sexes of the Anglos are scattered around Inner Earth to prevent any more rebellions from fermenting.

As for life on other planets in our solar system: END_OF_DOCUMENT_TOKEN_TO_BE_REPLACED

THE NEW HUMANS (1909) – Written by B Vallance. No other name has come to light for the author of this thought-provoking work. Explorer Montgomery Merrick is roaming around the wilds of 1909 Uganda when he falls down a mountainside and into a concealed valley.

Merrick’s injuries are such that he does not expect to survive but he wakes up on an operating table in fine condition. Looking down at him are amoeboid humans who don barrel-shaped exo-skeletons whenever they need to keep their forms stable, as in during the surgery they were performing on Merrick.

One of the beings speaks English and introduces himself to the recovering patient as the Chief Adaptor, who takes credit for “repairing” our hero. Merrick gradually becomes aware that his ultimate fate is still being debated by his odd saviors. END_OF_DOCUMENT_TOKEN_TO_BE_REPLACED

One of the most popular posts here at Balladeer’s Blog was my list about “ancient” science fiction from 1634-1909. Here is a followup list of sci fi tales that were way ahead of their time. FOR THE ORIGINAL LIST CLICK HERE

THE SPEEDY JOURNEY (1744) – Written by Eberhard Christian Kindermann. A five-man crew from Earth pilot a spacecraft to a moon of Mars, where they encounter alien life-forms of all kinds as well as secrets tying the inhabitants to Earth people by way of odd religious parallels. The space travelers also encounter a world-destroying meteor and a “space whirlpool.” CLICK HERE

THE VOYAGE OF LORD CETON TO THE SEVEN PLANETS (1765) – Written by female author Marie-Anne de Roumier. Set in the 1640s this story features an angel named Zachiel who transports a man and his sister to the planets of our solar system. END_OF_DOCUMENT_TOKEN_TO_BE_REPLACED