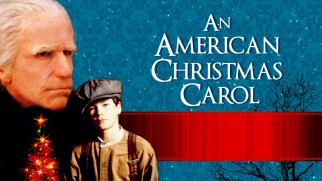 Christmas Carol-A-Thon 2014 continues! At the height of Fonzie-mania in the 1970s Henry Winkler had so much pull he could have insisted on a side-deal in which he got to play every D’Ascoyne in a televised remake of Kind Hearts and Coronets if he had wanted to. Mercifully he instead chose to star in this adaptation of A Christmas Carol.

Eric Till directed this telefilm which sets Dickens’ story in Depression- Era America. Winkler, so heavily made-up he looks like a zombie instead of an old man, portrays Benedict Slade, the Scrooge stand-in and R.H. Thompson plays Slade’s man-bitch Thatcher, the Bob Cratchit counterpart. David Wayne has the Jacob marley role as Merrivale and Susan Hogan barely registers as the forever-irritating Belle stand-in.

“I’m not gonna pay a lot for this makeup job!” … Henry Winkler IS a zombie Scrooge in An Undead Christmas Carol.

This version of the Carol pulls the annoying maneuver of pretending the visits from Merrivale and the other ghosts are all a dream. There’s even an in-world reference to the Dickens novel A Christmas Carol. On the plus side the visits of each of the Ghosts of Christmas Past, Present and Yet to Come are cleverly heralded by time period appropriate music and news broadcasts airing on Slade’s bedside radio. The old tight-wad is especially discomfited by the outre 1970s music blaring from the radio before the arrival of the black Ghost of Christmas Yet to Come.   END_OF_DOCUMENT_TOKEN_TO_BE_REPLACED

With the psychotic barbarians of Hamas proving once again that Islam is the greatest obstacle to world peace it seemed like a good time for a quick take on each individual episode of the cable series 21st Century Golem. For two seasons that edgy, irreverent show presented Jewish folklore’s clay monster the Golem defending Israeli children and the elderly from blood-crazed Hamas butchers with time out to battle the Muslim Brotherhood and Boko Haram for good measure. The pro-Hamas Barack Obama was the blustering comic-relief villain of the series and the actor portraying him has since been subjected to an IRS audit. Here’s a look at the highest-rated cable series in history!

EPISODE ONE – “21st Century Golem” – In the premier episode a Rabbi in Israel brings the clay monster called the Golem to life to fulfill its usual mission of protecting Jews from the hatemongers who always want them dead. The Golem heroically fights off dozens of murderous Hamas child-killers, but Pallywood – the Hamas propoganda arm – tries to make it seem like the Golem is to blame for all the violence. Barack Obama is the only world leader fooled by this and he calls on the U.N. to denounce Israel, which it does with giddy abandon. FOR THE FULL REVIEW CLICK HERE: https://glitternight.com/2013/10/25/twenty-first-century-golem-new-cable-tv-series/

EPISODE TWO – “Tears Fall From the Sky” – A group of delusional college students from America show up to show their solidarity with Hamas despite Hamas’ misogyny and homophobia. In a possible reference to the real-life Rachel Corrie incident the episode featured the college students summoning up the ghost of a naive young woman who died showing her devotion to terrorism.

This ghost battles the Golem but eventually realizes the error of its ways when the ghost witnesses the Hamas madmen raping and killing the college students who summoned her. The Muslim terrorists were doing so because of the students’ support for women’s rights. The ghost of the slain woman – called “Corinne Smith” in the story – joins the Golem in defeating the Hamas rapists/killers before they can do further harm. FOR THE FULL REVIEW CLICK HERE: https://glitternight.com/2013/11/01/controversy-over-last-nights-halloween-episode-of-21st-century-golem/ END_OF_DOCUMENT_TOKEN_TO_BE_REPLACED

The majority of made for cable programs stay on the air way too long and could learn from the makers of Twenty- First Century Golem, who planned on doing just two seasons and then bringing the story to a close. This controversial show is going out on top in the ratings race and with yet another controversial episode that has angered hatemongers from around the globe.

In the previous week’s cliffhanger ending the Golem had reassembled itself into dozens of human-sized Golems and was face-to- face with Muhammad himself, the blood- soaked central figure of the homophobic and misogynistic belief system called Islam.

Last night’s concluding episode was an all-out action epic and presented a battle royal between a gigantic Muhammad and the human- sized Golems for the first 10 minutes. At one point Muhammad had imprisoned the Golems in a force field and turned his attention to what he loved best – killing gay people and oppressing women. END_OF_DOCUMENT_TOKEN_TO_BE_REPLACED

Last night’s episode of Twenty-First Century Golem, the highest- rated cable show in history, was an all-out action extravaganza! In last week’s cliffhanger ending Barack Obama, the blustering comic- relief villain of the series, had ordered all of America’s satellite weaponry targeted on the Golem. As always props to the show’s creative team for being courageous and irreverent enough to target an American president for such savage satirical treatment. END_OF_DOCUMENT_TOKEN_TO_BE_REPLACED

Following last week’s episode which was censored by the Obama administration because of its references to the United States government’s lies about the Benghazi attack last night’s fourth episode of this 2nd season of Twenty-First Century Golem premiered to the show’s highest ratings ever. END_OF_DOCUMENT_TOKEN_TO_BE_REPLACED

The adventures of the mythical Jewish monster the Golem in the present day continued last night in this award- winning cable series that has riveted the nation like Game of Thrones, The Walking Dead and True Blood. So far in this second season the heroic Golem is trapped in an enormous kaiju-height form as a result of last year’s season-ending cliffhanger. END_OF_DOCUMENT_TOKEN_TO_BE_REPLACED

It’s the hottest cable series this side of The Walking Dead! Twenty-First Century Golem deals with the adventures of Jewish mythology’s creature the Golem set in the world of today. Last night was the first time it aired on its new night – Saturdays.  END_OF_DOCUMENT_TOKEN_TO_BE_REPLACED

Yes, it’s time for the Season Two debut of the hottest cable show this side of The Walking Dead or Game of Thrones. If you weren’t watching this show last year you must have been living under the proverbial rock. Twenty-First Century Golem deals with the adventures of Jewish mythology’s creature the Golem set in the world of today. END_OF_DOCUMENT_TOKEN_TO_BE_REPLACED

Last night’s episode of 21st Century Golem, the hottest new cable series since The Walking Dead, was the first part of the two-part finale for this inaugural season. True to form the episode was controversial both for its graphic violence and for the way in which Barack Obama, who is END_OF_DOCUMENT_TOKEN_TO_BE_REPLACED