Happy Anniversary to The Texas Twenty-Seven Film Vault, one of the pre-MST3K Movie Host shows. Yes it was Saturday night February 9th, 1985 that this program debuted in Dallas, Texas, in the same studio that would later be used for Joe Bob’s Drive-In. Here is an encore presentation of my EXCLUSIVE 2011 interview with Randy Clower, one of The Texas Twenty-Seven Film Vault‘s co-creators and co-hosts.

Before MST3K there was THE TEXAS 27 FILM VAULT! Before Joel and Mike lovers of bad movies had Randy and Richard! Before Pearl there was Laurie Savino! Before Devil Dogs, Observers and Deep 13 there came Cellumites, giant rats and Level 31.

In the mid 1980s The Texas 27 Film Vault was the show to watch on Saturday nights for wry mockery of Golden Turkeys preceded by episodes of vintage Republic Serials like Radar Men From The Moon and Canadian Mounties vs Atomic Invaders.

The Texas 27 Film Vault is one of the great unsung Movie Host shows of the 1980s and I was thrilled to get this exclusive interview with Randy Clower, co-star and co-creator of this legendary cult show from the Dallas/ Fort Worth area. “The Film Vault Guys” as they were often called by us fans, or “Vaulties”,  established the pattern that a few other Movie Hosts have since followed. END_OF_DOCUMENT_TOKEN_TO_BE_REPLACED

Balladeer’s Blog continues its examination of this neglected cult show from the mid-1980s.

HOST SEGMENTS: One particular Host Segment featured one of the show’s behind-the- scenes people portraying Commando Cody complete with helmet and rocket pack. He was portraying the character because the Commando Cody serial Radar Men from the Moon was the current serial being shown before the movie each week on The Texas 27 Film Vault.

Since Randy Clower still outranked his co-host Richard Malmos (at least until a few episodes later) in the fictional Film Vault Corps (“The few, the proud, the sarcastic”) their relationship often featured the type of abusive “Host and Second Banana” dynamic like that between Dr Morgus and his lab assistant Chopsley or Zacherle and his wife My Dear or Dr Forester and TV’s Frank.  END_OF_DOCUMENT_TOKEN_TO_BE_REPLACED

Yes, it was Saturday February 9th, 1985 when “Film Vault Technicians First Class” Randy Clower, Richard Malmos and Ken “Tex” Miller went on the air with the very first episode of the legendary cult show called The Texas 27 Film Vault! Years before MST3K this program featured the members of the fictional Film Vault Corps – “the few, the proud, the sarcastic” – showing and wryly mocking some of the worst – or at least campiest – movies ever made, often preceded by episodes of old Republic or Columbia Serials like Radar Men from the Moon, Atom Man vs Superman and many others! 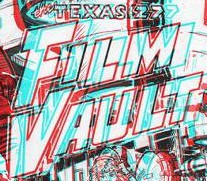 For the next few years Saturday nights in Texas and Oklahoma belonged to bad movies and serials, Film Vault Corps comedy sketches and interviews with figures like Vincent Price. At least for the 2 and 1/2 hours during which The Texas 27 Film Vault aired. Some of the other beloved figures from the program included Joe Riley (later famous for the cult tv show titled The Hypnotic Eye), Laurie Savino and Doug Bransom, the former Professor Cerberus himself!

Here’s Balladeer’s Blog’s look at that very first episode of The Texas 27 Film Vault, from way down on Level 31 in the Film Vault beneath Dallas, Texas. There was no serial that first night because the movie plus comedy sketches filled the entire running time. Below you’ll also find the link to my exclusive interview with Randy Clower.

SERIAL: Before showing and mocking The Crybaby Killer our members of the Film Vault Corps (“the few, the proud, the sarcastic”) showed and mocked an episode of the Mascot Serial The Phantom Empire (1935).

In that classically campy serial Gene Autry played a singing cowboy who saves the world from an advanced underground civilization that comes complete with killer robots who wear cowboy hats.

FILM VAULT LORE: The movie ticket give-away this week was for Prizzi’s Honor.

EXTRAS: Special thanks to T27FV fan Dr Shock-the-Monkey for the date and other info about this episode. He stated this episode also featured appearances by various Elvis impersonators but he wasn’t sure if they were legit or put-ons since they were all of the “bloated stomach and very weird hair” type of Elvis look-a-likes.

SERIAL : Due to the length of the movie this time there was not enough time before the film for Randy Clower and Richard Malmos, the machine-gun toting Film Vault Technicians First Class to show and mock a full episode of one of their pre-movie serials. Instead they showed the excerpt of Elvis Presley’s April 3rd, 1956 appearance on The Milton Berle Show before moving on to the night’s film.

THE MOVIE: Change of Habit is a movie that was practically MADE to be ridiculed. You’ve got END_OF_DOCUMENT_TOKEN_TO_BE_REPLACED 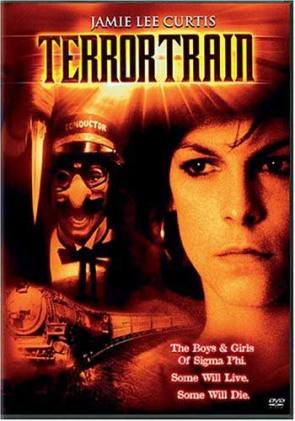 Balladeer’s Blog continues its examination of this neglected cult show from the mid-1980s.

EXTRAS: Randy Clower and Richard Malmos, as machine-gun toting Film Vault Technicians First Class and members of the fictional Film Vault Corps (“the few, the proud, the sarcastic”) had two and a half hours to work with each week. Interviews with figures like Vincent Price, Forry Ackerman and others were featured and the movies being shown and mocked were often preceded by episodes of old Republic serials like Radar Men from the Moon and others.

This episode featured Randy and Richard’s interview with Ben Johnson, whom they had interviewed at his ranch earlier in the year. Johnson also appeared in the episode’s film, Terror Train.

SERIAL: For this episode the movie was preceded by a chapter of  Mysterious Doctor Satan.

HOST SEGMENTS: The most memorable Host Segment  Randy and Richard did during this New Year’s-themed horror film was a bit where, as Midnight Dallas Time approached, they staged a countdown and then a raucous celebration of the arrival of … December 28th, 1986. Ken “Tex” Miller, Joe “The Hypnotic Eye” Riley and other Film Vault Corps members joined in the festivities in a great example of the wry humor of this pre-MST3K program.

The Texas 27 Film Vault was a great pre-MST3K bad movie show from the mid-1980s. The hosts Randy Clower and Richard Malmos (also the co-creators of the program) were members of the fictional quasi-military outfit called the Film Vault Corps – “the few, the proud, the sarcastic”. Ken Miller, who played the gung-ho Kilgore-esque Tex on the show was also a co-creator. Tragically Miller commited suicide in 1988.

The Texas 27 Film Vault aired for 2 and 1/2 hours every Saturday night from 10:30pm to 1:00 am with Randy, Richard, Tex, Joe The Hypnotic Eye Riley and Laurie Savino the Mystery Clip Technician showing and mocking episodes of old Republic and Columbia serials before showing and mocking the night’s bad or campy movie.

Texas and Oklahoma loved this cult show and it’s rare for Sooners and Longhorns to agree on anything! Here’s a look at some of the more memorable episodes from The Texas 27 Film Vault history.

Host Segments: Most of the Host Segments in this episode centered around a touring troupe from the Film Vault Corps Academy in Leadville, Co. That troupe – the FVC Academy’s Little Theatre Group – was performing for Randy, Richard, Tex and the others. Joe Riley’s gore effects took center stage as the touring thespians presented comedic reenactments of classic scenes from movies about aliens, including the infamous chest-burster moment from Alien and an unappetizing moment from the 80s remake of The Thing.

The gore in the Host Segments made this the first Texas 27 Film Vault episode to come with a “Viewer Discretion” warning. Their later presentation of the hilariously bad Friday the 13th Part 3 was another.

Movie: It! The Terror From Beyond Space was a joyously bad black & white space travel film from the 1950s. A Martian monster has already wiped out all but one member of the first expedition to the Red Planet. Next up on the menu for this ET who sucks all moisture from his victims: the rescue expedition who belatedly arrive to save the crew of the preceding mission to Mars.

END_OF_DOCUMENT_TOKEN_TO_BE_REPLACED

SERIAL: None. The movie, Film Vault Corps comedy sketches and commercials filled up the entire two and a half hours this time.

FILM VAULT LORE: This episode marked the second time The Texas 27 Film Vault came with a warning about violent content. It was also at least the second time they riffed on a movie that was originally in 3-D. Randy and Richard did various jokes about wearing 3-D glasses and 3-D effects coming out of the screen at them as they watched the movie. END_OF_DOCUMENT_TOKEN_TO_BE_REPLACED

SERIAL: Before showing and mocking the movie our members of the Film Vault Corps (“The few, the proud, the sarcastic”) usually showed and mocked chapters of old Republic or Columbia serials. For this episode a break was taken from Flash Gordon Conquers the Universe. Instead the 1977 Centron Educational short Halloween Safety was shown and mocked for its seasonal relevance.

Halloween Safety was eleven minutes long and is as much fun to riff on as such old shorts generally are. The killjoy Safety Czars at Centron do their best to drain as much fun from Trick or Treating as they can, although they never approach Sid Davis levels of paranoia.

The funniest part of the short is when the little girl is browbeaten by the narrator to change from her black witch costume (poor visibility for drivers) to an all-white witch’s costume, which, with the peaked hat and flowing robe makes her look like she’s auditioning for a role in The Littlest Klansman. Though the little black kid in whiteface is a close second.

THE MOVIE: Blood of Dracula’s Castle was directed by Bad Movie icon Al Adamson and is a fun Monster Rally turkey for the Halloween time of year. The Texas 27 Film Vault also showed a few other Al Adamson anti-classics like Dracula vs Frankenstein and Vampire Men of the Lost Planet.     END_OF_DOCUMENT_TOKEN_TO_BE_REPLACED

SERIAL: None this week. The movie, commercials and Film Vault Corps comedy sketches took up the entire running time.

HOST SEGMENTS/ COMEDY SKETCHES: There is some disagreement among Texas 27 Film Vault Fans. One faction argues that this was the episode in which Randy Clower – interested in preserving his youth like the main character in the night’s movie – took the nonexistent chemical Multiquixiphiline (see my exclusive interview with Randy Clower). END_OF_DOCUMENT_TOKEN_TO_BE_REPLACED