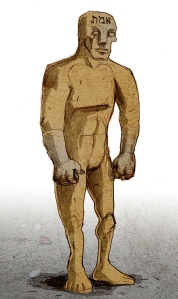 With the psychotic barbarians of Hamas proving once again that Islam is the greatest obstacle to world peace it seemed like a good time for a quick take on each individual episode of the cable series 21st Century Golem. For two seasons that edgy, irreverent show presented Jewish folklore’s clay monster the Golem defending Israeli children and the elderly from blood-crazed Hamas butchers with time out to battle the Muslim Brotherhood and Boko Haram for good measure. The pro-Hamas Barack Obama was the blustering comic-relief villain of the series and the actor portraying him has since been subjected to an IRS audit. Here’s a look at the highest-rated cable series in history!

EPISODE ONE – “21st Century Golem” – In the premier episode a Rabbi in Israel brings the clay monster called the Golem to life to fulfill its usual mission of protecting Jews from the hatemongers who always want them dead. The Golem heroically fights off dozens of murderous Hamas child-killers, but Pallywood – the Hamas propoganda arm – tries to make it seem like the Golem is to blame for all the violence. Barack Obama is the only world leader fooled by this and he calls on the U.N. to denounce Israel, which it does with giddy abandon. FOR THE FULL REVIEW CLICK HERE: https://glitternight.com/2013/10/25/twenty-first-century-golem-new-cable-tv-series/

EPISODE TWO – “Tears Fall From the Sky” – A group of delusional college students from America show up to show their solidarity with Hamas despite Hamas’ misogyny and homophobia. In a possible reference to the real-life Rachel Corrie incident the episode featured the college students summoning up the ghost of a naive young woman who died showing her devotion to terrorism.

This ghost battles the Golem but eventually realizes the error of its ways when the ghost witnesses the Hamas madmen raping and killing the college students who summoned her. The Muslim terrorists were doing so because of the students’ support for women’s rights. The ghost of the slain woman – called “Corinne Smith” in the story – joins the Golem in defeating the Hamas rapists/killers before they can do further harm. FOR THE FULL REVIEW CLICK HERE: https://glitternight.com/2013/11/01/controversy-over-last-nights-halloween-episode-of-21st-century-golem/ END_OF_DOCUMENT_TOKEN_TO_BE_REPLACED