Last night’s episode of 21st Century Golem, the hottest new cable series since The Walking Dead, was the first part of the two-part finale for this inaugural season. True to form the episode was controversial both for its graphic violence and for the way in which Barack Obama, who is END_OF_DOCUMENT_TOKEN_TO_BE_REPLACED

THE GOLEM: IN TONIGHT’S EPISODE IT’S SCIENCE VS THE SUPERNATURAL 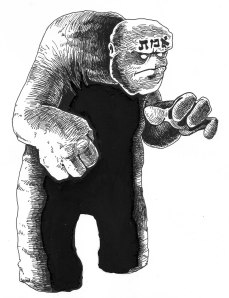 The fourth episode of the hot new cable television series 21st Century Golem premieres tonight. To nobody’s surprise the series is once again embroiled in a controversy over a throwaway element that manages to overshadow the actual storyline.

If you’ve been following this excellent but ultra-violent program you know that it features a clay monster called the Golem who is protecting modern-day Israelis – especially children – from the Hamas terrorists who revel in nonstop killing. Barack Obama has a recurring role as the comic-relief villain who distorts reality as much as he has to in order to side with the Hamas butchers and blame all the violence on the Golem. Little Barry is therefore a combination of J. Jonah Jameson from Spider-Man stories and General “Thunderbolt” Ross from Hulk stories.

In the pre-credits teaser the Golem rescues a few dozen hostages from the Muslim terrorists who have captured them. With the hostages freed and the terrorists all reduced to bloody bits by the rampaging monster Barack Obama is horrified and once again condemns Israel for the whole situation.

After the way he’s been humiliated in front of the entire world over and over again because of his ineptitude and dishonesty Obama is determined to assert himself in the Middle East. Under END_OF_DOCUMENT_TOKEN_TO_BE_REPLACED

THE GOLEM BATTLES THE REANIMATED CORPSE OF YASSER ARAFAT

Tonight’s third episode of the new cable television series 21st Century Golem finds the clay monster from Jewish folklore battling a zombified Yasser Arafat, the most famous Palestinian terrorist of them all.

The reason given for Arafat’s reanimation? Hamas’ storage of chemical weapons underneath Arafat’s burial place. The episode depicts the chemicals leaking into Yasser’s corpse and causing his body to rise from the grave to do what the madman loves best – kill innocent Israeli civilians. If only the makers of 21st Century Golem had waited they would have gotten some scripting help from this week’s revelation that Arafat’s corpse supposedly showed signs of poison. If they had known that would happen they could have thrown in a reference to the alleged poison mingling with the other chemicals to give us this zombie terrorist.

At any rate the Arafat zombie thrills the Hamas butchers, who feel they now have a supernatural ally of their own to use against the Golem who has been thwarting their murderous plans. After a END_OF_DOCUMENT_TOKEN_TO_BE_REPLACED

A Golem as depicted in the 1920’s silent film

Last week’s premier episode of the new cable horror series 21st Century Golem sparked a fair amount of controversy with its depiction of a Golem wiping out Hamas terrorists who were targeting Israeli children. The show’s way of using Barack Obama as a comic-relief villain blaming the Golem for the violence and siding with the Hamas butchers prompted some outcry as well, mostly from Little Barry’s mindless and unquestioning supporters. But since those people still think Obamacare was a good idea it’s impossible to take them seriously. I applaud the show for having the courage to feature an American president in a villainous light.

Last night’s episode of 21st Century Golem upped the ante and has caused a hundred times the uproar of that debut broadcast. The first act of the episode, titled Halloween for Hamas, featured the heroic Golem thwarting a Hamas plot to blow up a hospital full of Jews and Christians amid some incredibly violent scenes. Some have END_OF_DOCUMENT_TOKEN_TO_BE_REPLACED

The first episode of the hot new cable series Twenty-First Century Golem premiered last night. For the uninitiated the Golem is a clay monster from Jewish folklore created by a Rabbi to protect the Jewish people from their oppressors. Most Golem stories are set hundreds of years ago but this new show, from the director of the hit action movie The Burqa, is set here in the year 2013.

This Golem is created in Israel to protect Israeli civilians from mad dog Hamas terrorists. The Hamas butchers are targeting Israeli children and gleefully whooping as their fragile young bodies are blown to bloody pieces. The Golem wades into their END_OF_DOCUMENT_TOKEN_TO_BE_REPLACED