In keeping with the way in which every other First Season episode of the new Cable Show 21st Century Golem sparked an uproar last night’s conclusion of the 2-part Season Finale has ignited an outcry of its own.

First the Golem manages to extricate itself from the standoff with the Iranian Army from last week’s cliffhanger (I won’t spoil anything for you by revealing how). Making his way into Iran proper the heroic clay monster continues eradicating all of the Iranian armed forces that attempt to destroy him before he can put the kibosh on their nuclear program. 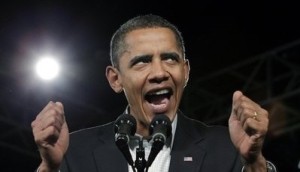 “Israel is the only thing standing between the world and complete peace!”

The story depicts Iran making sercret plans to nuke Israel while Barack Obama, the comic-relief blowhard villain of the show, is already making plans for blaming Israel for its own destruction. The Golem saves untold millions of lives by sabotaging the Iranian nuclear program in very destructive fashion.

Infuriated once again at the way the Golem has thwarted his plans Barack Obama uses top-secret drones with advanced weaponry to blast the Golem to pieces by way of revenge. While Obama publicly claims that by destroying the Golem he has “brought a lasting peace” to the Middle East the rest of the world acknowledges the Golem’s heroic actions. Oblivious as always to how he is REALLY perceived, Obama promises to send commemorative statues of himself to every nation in the Middle East as the world wonders if the heroic Golem has truly been destroyed or somehow survived.

Based on the blockbuster ratings for this edgy program we already know the Golem will emerge alive and well next May when Season Two begins!

FOR MY REVIEW OF THE FIRST EPISODE OF 21st CENTURY GOLEM CLICK HERE: https://glitternight.com/2013/10/25/twenty-first-century-golem-new-cable-tv-series/

22 responses to “THE CONTROVERSIAL SEASON FINALE OF THE GOLEM”