JOE BIDEN HAS EVEN MORE KIDS IN CAGES PLUS OTHER SCANDALS 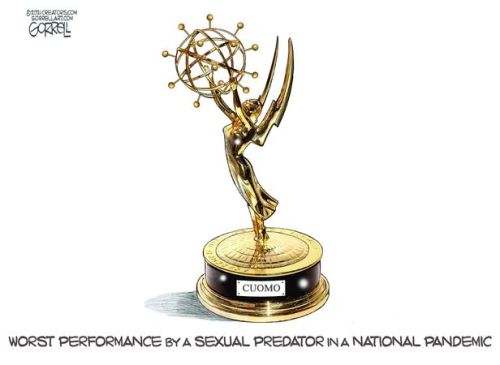 Independent Voter site Balladeer’s Blog presents another look at – among other things – the scandals and screwups of Joe Biden, the career criminal and senile demagogue who was installed in the White House.

BIDEN’S KIDS IN CAGES: BIDEN HAS FAR MORE KIDS IN CAGES THAN TRUMP EVER DID, PLUS BIDEN IS REOPENING A FACILITY CLOSED BY TRUMP TO CONFINE THE RECORD-SETTING OVERFLOW. But, as we all know, Democrats never really cared about Kids in Cages. They just used them as a political stick to attack Trump with.

INELIGIBLE DEMOCRATS OF HOLLYWOOD LINE-JUMP OVER WORKING CLASS AND THE ELDERLY TO GET THEIR COVID VACCINATION. Democrat hatred of the working class, the poor and the elderly rages unabated.

BIDEN ADMINISTRATION CALLOUSLY BUT GLEEFULLY CALLS THE COVID EPIDEMIC “THE BEST THING THAT EVER HAPPENED” FOR DEMOCRATS. “Democrats uber alles” I guess.

BIDEN ADMINISTRATION “CONCERNED” ABOUT THE TERRORISM BEING COMMITTED BY GROUP THEY JUST TOOK OFF THE LIST OF TERRORIST GROUPS. Typical Biden ineptitude.

EMMY-WINNING GENOCIDE: ANDREW CUOMO CALLED OUT FOR THE “DEATH TRAPS” HE RAN FOR THE CRITICALLY DISABLED. A courageous whistle-blower speaks out.

NEW DISCOVERY IN THE ONGOING VOTE FRAUD SCANDAL IN WISCONSIN. 2020 was clearly at least as dirty as the 1876 and 2000 elections.

BEST OF BIDEN GOOFS AND GAFFES

BIDEN HAS KIDS IN CAGES (like during Obama’s and Trump’s administrations). Oh, that’s right, anti-Trump fascists never really cared about kids being in cages, they just wanted to use those kids as a political stick to attack Trump with. Now those hypocrites are back to not even pretending to care about such things. Anti-Trumpers apparently won’t complain about Joe Biden’s kids in cages.

Already Articles of Impeachment have been filed against Biden, and the YT video of his make-believe “inauguration” has THIRTY-NINE THOUSAND DOWN-VOTES and only four thousand up-votes. Hilarious!

Well, as Senile Joe Biden launched his war on the working class by destroying thousands of jobs already and has alienated multiple U.S. allies  while tear-gassing peaceful protesters here’s a reminder of what a supreme dolt the Pretender is:

The Robber Baron Democrats of Silicon Valley and Social Media continue to abuse their power with their ongoing interference in the 2020 presidential election. Influential people don’t want you to hear about Joe Biden’s meetings with his son’s alleged co-conspirators. Social Media outlets which allow the spread of idiotic conspiracy theories claiming Trump can be tied to kidnapping plots suddenly act like they have standards when it comes to verifiable exposes about the Joe Biden Crime Family.

Senile Joe Biden and his son Hunter’s alleged Influence-Peddling schemes are getting more and more exposure in the news lately so Jack Dorsey at Twitter joined with Democrats at Facebook and elsewhere to smother AND IN SOME CASES SUSPEND accounts trying to share news stories about the ongoing Biden scandals.

The technofascists do not deserve Section 230 protection as they have proven over and over and over again that they abuse their power to shut out information and opinions that don’t align with the views of privileged one percenters like Jack Dorsey. Even though Dorsey has admitted it was “unacceptable” to censor the reports about the Biden-Burisma corruption scandals, too much damage has already been done.

Here’s Balladeer’s Blog’s reminder from earlier this year about how the modern-day Robber Barons like Dorsey and his ilk are even worse than the 19th Century Robber Barons. It was titled: 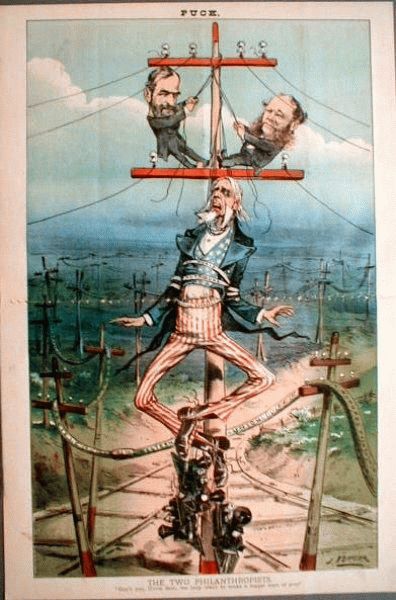 The point of the cartoon is the way those two Robber Barons – allied with like-minded newspaper tycoons (whose newspapers’ names are on the bonds around Uncle Sam) – abused their wealth and political influence to bind the United States (represented here by Uncle Sam) to their will.

This is similar to the way the Silicon Valley and Social Media Robber Barons of today cloak themselves in “socially conscious” public images while in reality clutching the United States and all its institutions by the throat. END_OF_DOCUMENT_TOKEN_TO_BE_REPLACED

When even some reporters at the Democrat media outlet CNN realize that the lies Democrats tell about President Trump’s Charlottesville remarks have been exposed you’d think Joe Biden would know better than to try peddling them.

Or maybe not. The reason so many of us former Democrats decided to #WALKAWAY is because being a Democrat now means lying on a daily basis.

At any rate CNN’s Jake Tapper and Steve Cortes called out the lies Biden was throwing around about President Trump’s remarks about Charlottesville last year. Trump NEVER called hatemongers like Nazis and Klansmen “fine people.” The “very fine people on both sides” remark clearly referred to there being fine people on both sides of the public debate regarding old war monuments and on what happened at Charlottesville.

Democrats and their media outlets have been trying to sell their lies about Trump’s remarks ever since then, with Crazy Joe Biden even perpetuating that lie when he joined 9,783 other Democrats in the presidential race.

Anyway, as even veteran Trump-hater Jake Tapper had to admit:

That rare moment of honesty from Tapper was good to see, but the way so many Democrats continue pushing that lie wins stronger support for Trump among his supporters and people on the fence. As the now-cliché goes about Democrats’ dishonest attacks on the President, “Do you want more Trump? Because THIS is how you get more Trump.”

Among the many sources where you can verify that President Trump clearly condemned the Neo-Nazis, Antifa Fascists and Neo-Klansmen and did NOT call them “fine people”: END_OF_DOCUMENT_TOKEN_TO_BE_REPLACED