THIS HAUNTING IMAGE STRIKES RIGHT TO THE CORE OF THE HATRED THAT IS ISLAM.

Courageous Muslim women like Asra Q Nomani and Hala Arafa wrote an op-ed for the Washington Post denouncing the condescending and wrong-headed attempts of American Liberal women to defend the demeaning clothing that Muslim men force Muslim women to wear.

They called on the Liberal women to instead join them in denouncing Islam’s sexism and its oppression of women. Don’t hold your breath, ladies. American Liberals are FAR too gutless and hypocritical to criticize Islam like they do Christianity and Judaism.

UNTIL SUCH TIME AS ALL MUSLIM WOMEN ARE FREE TO MAKE THEIR OWN CHOICE ON THE MATTER, IT IS IRRELEVANT HOW MANY MUSLIM “STEPFORD WIVES” COME FORWARD TO PRETEND MUSLIM WOMEN WEAR THOSE OUTFITS WILLINGLY.

I’m not just pro-choice on abortion – I’m pro-choice on the clothing issue, too. American Liberals are too hypocritical for that. FOR THE LADIES’ OP-ED: END_OF_DOCUMENT_TOKEN_TO_BE_REPLACED

NOTE TO MUSLIM APOLOGISTS ON BURKAS AND NIQABS

Spineless hypocrites often try to defend the way Muslim men force Muslim women to dress in demeaning body bags. Those hypocrites even try to pretend that Muslim women are “happy to be wearing them.”

THAT PUTS THOSE HYPOCRITES IN THE SAME HISTORICAL CATEGORY AS DEFENDERS OF SLAVERY IN THE 1800’s WHO USED TO INSIST THAT AFRICAN- AMERICANS WERE HAPPY TO BE SLAVES, OTHERWISE WHY WOULD THEY BE SINGING IN THE COTTON FIELDS.

Until such time as ALL Muslim women can make their own CHOICE on the matter it is irrelevant how many Muslim “Stepford Wives” come forward to pretend they wear those outfits willingly.

Individually the ladies of this real-life League of Extraordinary Women have all been featured over the years here on Balladeer’s Blog. Each one of them has more courage than all of the make-believe feminists whining about “microaggressions” and “safe spaces” on college campuses across America.

These ladies face REAL danger from REAL oppressors of women.

*** WAFA SULTAN is an author and activist against Islamofascism. She writes first-hand about the barbaric and systematically demeaning treatment that women in the Muslim world are subjected to.

Wafa is one of those courageous individuals who are needed the most at this time – the kind who demand to be heard no matter how dangerous it is for them personally. In 2006 Wafa was the first  woman on the Muslim propoganda channel Al Jazeera. She masterfully demolished the inept reactionary arguments of the Imam she was debating.
END_OF_DOCUMENT_TOKEN_TO_BE_REPLACED 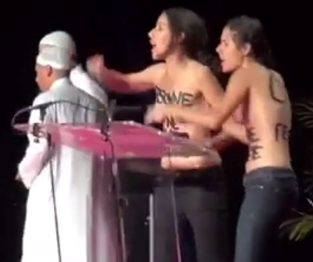 Wouldn’t it be great if American feminists developed the backbone to speak out about Muslim Apartheid?

Recently FEMEN, a feminist group very active in Europe, once again proved more courageous than most feminists in America by protesting at a Muslim cleric conference in Pontoise, France. The protestors entered disguised in the repulsive head-to- toe garments that Muslim men force women to wear.

When the Muslim “holy men” were discussing the Koran’s blessing on beating women the swashbuckling activists ran onstage and removed the outfits, revealing their naked bodies with feminist slogans written on them.

“Personne ne me soumet” (“No one subjugates me”) and “Je suis mon proper prophete” (“I am my own prophet”) were two of the slogans. FEMEN has earned an international reputation as one of the painfully few feminist organizations courageous enough to tackle Islam’s oppression of women.

Here in the United States those FEMEN slogans would have been deemed “hate speech” and banned for being “offensive to Muslims.” To our spineless media and politicians everyone has to be inclusive … except for the privileged Muslims.

FEMEN’s inspiring statement denouncing Muslim Apartheid went far beyond the mushy politically correct gibberish spouted by the hypocritical cowards of what masquerades as western liberalism in the 21st Century. Here is FEMEN’s statement in full:  END_OF_DOCUMENT_TOKEN_TO_BE_REPLACED

ISLAM AND MISOGYNY: A SHOUTOUT FOR LAST WEEK’S FEMEN PROTEST AGAINST ISLAM’S TREATMENT OF WOMEN

As usual women have much more courage than men.

Hello from your old anarchist buddy Balladeer, but you can just call me “the puppet of Jews” like the Muslim fanatics who threaten me do. It’s no secret that Islam treats women like slaves and worse. It’s also no secret that American Liberals are far too cowardly to criticize Islam the same way they criticize Christianity for its own outdated views.

Last week FEMEN, a feminist group in Europe, staged a topless protest against Islam’s violent, savage and subhuman treatment of women. There was a lot of action outside the Grand Mosque in Paris, where FEMEN members showed they have more backbone than all of the American Left put together by burning a END_OF_DOCUMENT_TOKEN_TO_BE_REPLACED