Independent Voter site Balladeer’s Blog presents another piece from Australia regarding the utter joke that is Joe Biden. Choosing their words with more care than frantic, fascistic Democrats ever do, the Aussies provided another quality take on the problems the Democrats’ media outlets desperately bury. Plus, even some Democrats have made moves to prevent Biden from stumbling into a nuclear strike. (Though I’d be more worried about his political corruption and assault on the working class and the poor.)

WE NEED THIRD PARTIES! In a year when Democrats keep threatening that they will AGAIN refuse to accept a presidential election loss their hate-filled and divisive “Virtual Convention” did the seemingly impossible: it gave Senile Joe Biden’s OPPONENT a positive bounce in his approval rating.

Utterly hilarious, especially since de facto Third Party President Donald Trump was ALREADY higher than Obama was in 2012 at this point. And Joe Biden’s idiotic remark “THERE’S NEVER BEEN ANYTHING WE’VE BEEN ABLE TO ACCOMPLISH WHEN WE’VE DONE IT TOGETHER” did nothing to dispel the public’s concerns about Biden’s obvious senility and/or dementia.

But Democrats, the hate-filled party I’m ashamed to admit I used to belong to before they lost their sanity, continue living up to their new label as “The House Harkonnen of Politics.” Democrat fascists have made repeated threats that they will use the fraud-friendly process of mail-in voting to drag out the election results FOR MONTHS after election day. And will get more and more violent if they don’t get their way. (See Seattle, Portland, Chicago and elsewhere for a small sample of what Democrats have planned for November.)

BY THE WAY, DEMOCRATS – WHO SEEM CONGENITALLY INCAPABLE OF BEING TRUTHFUL – KEEP PRETENDING THAT MAIL-IN VOTING IS THE SAME AS ABSENTEE VOTING, WHICH IT’S NOT.

Democrats just keep adding to the list of ways in which they sink lower and lower. Read on: END_OF_DOCUMENT_TOKEN_TO_BE_REPLACED

JOE BIDEN: SEVENTEEN INCOHERENT MINUTES WITH THE SENILE AND/ OR DEMENTED CANDIDATE

Thank you to the BERNIE BROS who brought this video to my attention. It’s yet ANOTHER look at the incoherent ramblings of the senile, crooked and inept presidential candidate Joe Biden.

Even though Bernie’s out, his supporters are still making the perfectly valid point that Joe Biden’s cognitive problems are as bad as the trail of corruption he has left behind him. Here is just ONE of the videos with the doddering fool Biden in action. #WALKAWAY

Thank you to the BERNIE BROS who brought this video compilation to my attention. Doddering, inept Joe Biden continues stumbling along. His incoherent ramblings have become such an embarrassment to his presidential campaign that he has been put under wraps, available only for prepackaged statements (which he frequently muffs) and delicate softball “interviews” with supportive Democrats in the media.

Below (OR CLICK HERE ) is the latest supercut of Biden’s senile attempts to put on his big boy pants and pretend he would be capable of handling emergencies like the Coronavirus. The Democrats seem to have already designated Joe Biden as their 2020 candidate while snubbing Bernie Sanders once again.

As Bernie Sanders supporters point out, with over 60% approving of de facto Third Party President Trump’s handling of the current crisis, Bernie might make a better candidate than Biden against the FDR-like Trump.

To quote from the story: “In a series of interviews Tuesday, Joe Biden attempted to remind America he’s still running for president, but ended up providing President Trump a treasure trove of campaign fodder.”

“On The View, Biden scored an own-goal after trying to take down Trump, saying: “We have to take care of the cure. That will make the problem worse no matter what — no matter what.” (NOTE FROM BALLADEER: Joe may be suffering from dementia. Watch the whole video.) END_OF_DOCUMENT_TOKEN_TO_BE_REPLACED 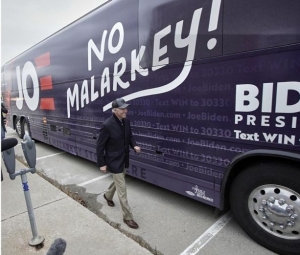 Joe Biden’s hilariously bizarre but endlessly entertaining political campaign continues. Nibbling on his wife’s fingers while she was trying to deliver a speech on his behalf, telling pervy stories about little kids rubbing his “hairy legs” around a public swimming pool, claiming he comes from “the black community” and that he went to “an HBCU,” Joe always brings the crazy.

Sometimes it’s not his fault, like when his dentures came loose during one of the televised debates, his grotesquely bloody eye during another debate, Obama preferring to endorse Canada’s Prime Minister while snubbing Joe, etc. But for every time fate makes Joe’s buffoonish nature impossible to ignore there are plenty of other times when he is the author of his own destruction. Well, destruction plagiarized from someone else, anyway.

Biden’s inept coverup of his and his son Hunter’s corruption, the inane “gang member Corn Pop” tall tale, and so much more came to mind when I learned Quid Pro Joe’s newest slogan: “No Malarkey!” Seriously. THAT’S what he and his staff came up with. I guess they feel that slogan is the bee’s knees. Or the cat’s pajamas.

If you’re going to use a pathetic and outdated expression like “No Malarkey” you should at least go all the way and add “Dagnabit!” at the end of it. C’mon, Joe! Commit to the bit!

Will Joe’s opponents for the Democrats’ nomination escalate things? Will they announce new slogans like “No balderdash!”, “No hooey!”, “23 Skidoo” or “I’m what made us wiser than the Kaiser?” Should voters watch out for “Oh, rubbish!” or “Stuff and nonsense!” or a dangerously succinct “Nertz!” This could spiral out of control if they’re not careful. One of them may even resurrect “No horseplay!” in response to Joe’s creepy public pool story and his pervy confession that he loves it when children jump in his lap.

I can’t wait for insider accounts of the Biden campaign so I can read all about the bitter in-fighting over whether or not to use an exclamation point or a more statesmanlike period after Malarkey in that slogan. And did Joe’s advisers warn him that Americans might not be ready for a Malarkey-denier in the White House?

It remains to be seen if Biden’s new zero tolerance policy regarding Malarkey will be the game-changer he feverishly hopes it will be, but in the meantime “No Malarkey” has joined Wendell Wilkie’s “No man is good three times” as my favorite absurd campaign slogan.