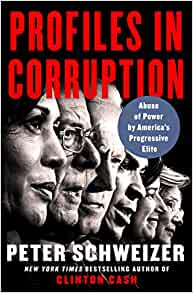 Peter Schweizer’s latest book exposing some of the uglier activities of American politicians has already become a bestselling sensation. Schweizer doesn’t rely on the “unnamed sources” approach that America’s corrupt corporate media has made synonymous with partisan cheap-shots. Instead there are volumes of documents and legal filings regarding the exposes in Profiles in Corruption.   END_OF_DOCUMENT_TOKEN_TO_BE_REPLACED

In 2016 Balladeer’s Blog pointed out several times that the only hope for the opening steps in recognizing and addressing the rampant corruption in America’s Third World Level thugocracy would be if either Donald Trump or Bernie Sanders miraculously won the Presidency.

I knew that a victory by either of them would force the dropping of the façade, sort of like the scrambling of insects when a rock is turned over. Sadly, Bernie has shown that he would have sold out to the establishment immediately – and very cheaply if you look at how easily the Democrats bribed him into cooperation, despite his fiery but phony pose. As Hillary would point out, she may be a whore but at least she isn’t a CHEAP one like Bernie.

The events since the election, from the Democrats threatening the safety and lives of the members of the Electoral College by publicly posting their addresses on up through the ongoing Mueller Witch Hunt have shown the real nature of the career criminals called Democrats and Republicans. President Trump – the new FDR and the new JFK – is truly a de facto Third Party President.

I’ve been inundated with (unsought) congratulations by people from both sides who used to think I was overly pessimistic about the cesspool that has masqueraded as a government in the U.S. for several decades. They’ve been graciously telling me that they’ve seen – in the frantic reaction to President Trump’s attempts to Drain the Swamp – verification of everything I’ve said over the years about the white collar criminals called career politicians.

That’s very nice of those people, but I don’t require or expect any personal acknowledgements – the best you can do if you feel that way is openly share your observations with others. The numbers of “woke” people on this subject seem to grow exponentially by the day. Unfortunately, too many of them are still too easily browbeaten into silence.

At any rate, here’s a piece by Tom Trinko, another person like myself who has grown disgusted with Democrats and their “my political party right or wrong” attitude. (As always I think we need Third Parties since Republicans are no better.) The link is below, but first some excerpts:

“There are currently two worlds: one for the rich, leftists, and the Deep State actors, and one for the average American.  Here are some of the differences:

Hillary can pay Russians, who may be working for the Russian government, for unconfirmed dirt on Trump and use that dirt during the campaign as well as using it to get the government to spy on Trump for her, but it’s not collusion.

Our World:
Trump is guilty of collusion even though there is not a shred of evidence that he did anything wrong.

Their World:
Bill Clinton meeting with Loretta Lynch while Lynch is supposedly investigating his wife is perfectly okay.

Our World:
Trump asking, but not ordering, James Comey to go easy on Flynn just as Comey went easy on Hillary is obstruction of justice.

Their World:
Obama can ignore federal court orders to restart issuing permits for drilling in the Gulf and to stop issuing DACA waivers.

Their World:
Obama can rescind every executive order Bush made.

Our World:
Obama is a super-president whose executive orders can’t be overturned by Trump

Their World:
A Russian oligarch who contributes $25,000,000 to Hillary’s foundation is cool.

Our World:
The same oligarch giving $150,000 to Trump’s foundation is cause for a federal investigation. END_OF_DOCUMENT_TOKEN_TO_BE_REPLACED