We need alternate political parties. Independent Voter site Balladeer’s Blog presents another look at the ugly hoax (or maybe I should say Big Lie) about Trump collusion with Russia. Even some Democrat reporters over the years covered how false that story was (see below). No matter how much I despised George W Bush or Barack Obama, for instance, I wrote multiple blog posts about how ridiculous it was when people claim Bush planned the 9-11 attacks or that Obama was “a Muslim sleeper agent.”

Trump haters seem incapable of any rational thought when it comes to him, though. For years now every aspect of the “Russian Collusion” nonsense has been debunked and traced to Hillary Clinton campaign “opposition research” (the euphemism in America’s corrupt political system for manufacturing stories about rival candidates). Even veteran Trump hater Russell Brand has done multiple YT videos acknowledging that Trump never colluded with Russia and that the Hillary Clinton campaign was behind that misinformation.

At any rate, the latest developments in the ongoing investigation of the perpetrators of the Russian Collusion hoax prompted news stories around the world, including Australia.

And, to quote from Democrat reporters who have covered what a hoax the entire Russian Collusion nonsense was …

ROLLING STONE REPORTER MATT TAIBBI, who is very anti-Trump, has once again risen above his own feelings – like reporters are SUPPOSED TO DO – and pointed out that the IG report actually verified the claims made by Congressman Devin Nunes and President Trump himself about the FBI’s political assault on Trump. Taibbi’s Rolling Stone piece shows how damning the IG report was for the FBI, Schiff and the Democrats’ media outlets. “Democrats are not going to want to hear this” are the most appropriate words in his article.

In a previous article, Taibbi (like Sharyl Attkisson one of the few actual “journalists” left in the country) pointed out that the “Russian Collusion” nonsense was “WMD’s times a million” (CLICK HERE ).

Now, in his latest article, Matt points out how the anti-Trump forces need to stop deluding themselves that there isn’t something deeply wrong at the FBI and with the entire FISA process. The link is below, but first some excerpts:

“Horowitz describes at great length an FBI whose “serious” procedural problems and omissions of “significant information” in pursuit of surveillance authority all fell in the direction of expanding the unprecedented investigation of a presidential candidate (later, a president)” (NOTE FROM BALLADEER: The fact that the Democrats are willing to ignore this Gestapo-style approach by the FBI just because they hate the man being investigated shows how low that party has sunk.)

“…Likewise, the use of reports by ex-spy/campaign researcher Christopher Steele in pursuit of Foreign Intelligence Surveillance Act (FISA) authority had far-reaching ramifications. Not only did obtaining a FISA warrant allow authorities a window into other Trump figures with whom Page communicated, they led to a slew of leaked “bombshell” news stories that advanced many public misconceptions, including that a court had ruled there was “probable cause” that a Trump figure was an “agent of a foreign power.” There are too many to list in one column, but the Horowitz report shows years of breathless headlines were wrong.” (NOTE FROM BALLADEER: Yes, those headlines were VERY wrong.)

“Press figures have derided the idea that Steele was crucial to the FISA application, with some insisting it was only a “small part” of the application. Horowitz is clear:  ‘We determined that the Crossfire Hurricane team’s receipt of Steele’s election reporting on September 19, 2016 played a central and essential role in the FBI’s and Department’s decision to seek the FISA order.” 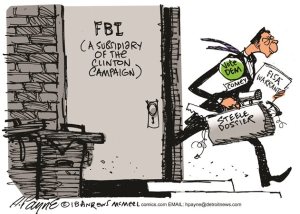 “… The Steele report reads like a pile of rumors surrounded by public information pulled off the Internet, and the Horowitz report does nothing to dispel this notion. At the time the FBI submitted its first FISA application, Horowitz writes, it had “corroborated limited information in Steele’s election reporting, and most of that was publicly available information.”

“Horowitz says of Steele’s reports: “The CIA viewed it as ‘internet rumor.’” Worse (and this part of the story should be tattooed on the heads of Russia truthers), the FBI’s interviews of Steele’s sources revealed Steele embellished the most explosive parts of his report.” (NOTE FROM BALLADEER: And this is exactly like the way J Edgar Hoover’s FBI would allow even the most salacious and unconfirmed rumors about his political targets to be included in FBI files, knowing that to laymen the fact that something comes from “an FBI file” lends it undeserved credibility.)

“The “pee tape” story, which inspired countless grave headlines…and plunged the Trump presidency into crisis before it began, was, this source said, based on a “conversation that [he/she] had over beers,” with the sexual allegations made… in “jest”! …In fact, charged by Steele to find corroboration, the source could not: corroboration was “zero,” writes Horowitz…The impact was greater than just securing a warrant to monitor Page.”

“More significant were the years of headlines that grew out of this process, beginning with the leaking of the meeting with Trump about Steele’s blackmail allegations, the insertion of Steele’s conclusions in the Intelligence Assessment about Russian interference, and the leak of news about the approval of the Page FISA warrant. As a result, a “well-developed conspiracy” theory based on a report that Comey described as “salacious and unverified material that a responsible journalist wouldn’t report without corroborating,” became the driving news story in a superpower nation for two years.”

“Democrats are not going to want to hear this, since conventional wisdom says former House Intelligence chief Devin Nunes is a conspiratorial evildoer, but the Horowitz report ratifies the major claims of the infamous “Nunes memo.”

“As noted, Horowitz establishes that the Steele report was crucial to the FISA process, even using the same language Nunes used (“essential”). He also confirms the Nunes assertion that the FBI double-dipped in citing both Steele and a September 23, 2016 Yahoo! news story using Steele as an unnamed source. Horowitz listed the idea that Steele did not directly provide information to the press as one of seven significant “inaccuracies or omissions” in the first FISA application”

“There was gnashing of teeth when Nunes first released his memo in January, 2018. The press universally crapped on his letter, with a Washington Post piece calling it a “joke” and a “sham.” House Speaker Nancy Pelosi slammed Nunes for the release of a “bogus” document, while New York Senator Chuck Schumer said the memo was intended to “sow conspiracy theories and attack the integrity of federal law enforcement.”

“Many called for his removal as Committee chair. The Horowitz report says all of that caterwauling was off-base. It also undercuts many of the assertions made in a ballyhooed response letter by Nunes counterpart Adam Schiff, who described the FBI’s “reasonable basis” for deeming Steele credible. The report is especially hostile to Schiff’s claim that the FBI “provided additional information obtained through multiple independent sources that corroborated Steele’s reporting.”

FOR MORE FROM THIS EXTRAORDINARY PIECE BY A REPORTER ABLE TO SEE BEYOND HIS OWN DISLIKE OF PRESIDENT TRUMP CLICK HERE  And to use the language of Democrat Fundamentalists for a moment, let me point out that IF THEY COULD DO THIS TO A “PRIVILEGED WHITE MALE BILLIONAIRE” they would do it to ANYBODY they disapprove of.