Previously Balladeer’s Blog has examined blaxploitation horror films as well as some blaxploitation films that transcended their genre. This time around I’ll take a look at Pam Grier’s 4 best films from the body of work that prompted Ebony magazine to call her “the Mocha Mogul of Hollywood” in the 1970’s. 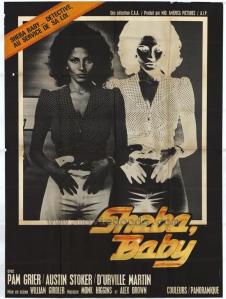 4. SHEBA, BABY (1975) – Pam plays private detective Sheba Shayne in this thoroughly enjoyable actioner. When white gangsters are leaning on the savings and loan run by her old flame, Sheba heads home and uses her gun and her fists to put the bad guys in their place.

Some of the most highly stylized stunt work in Pam’s films is on display in Sheba, Baby. Any Clint Eastwood or Charles Bronson movie from the decade would have been proud of the action-packed finale, which  features plenty of fights and chases on boats traversing scenic waterways.

The movie is directed by William Girdler, which naturally means we see a LOT of Louisville, Kentucky. To his credit, however, Girdler does find very visually appealing locations to shoot in so his homer pride isn’t hard to take in this flick. If you watch closely you’ll even catch a glimpse of the house where the bulk of Girdler’s blaxploitation horror movie Abby was filmed.

3. COFFY (1973) – Following a loved one’s tragic experience with drugs our title heroine, a nurse by day, poses as a hooker by night and takes to blowing away pushers in some gloriously violent scenes.

The cops are out to put a stop to the killing spree of the unidentified vigilante vixen, with one of those cops being Pam’s own beau. He has no idea his beautiful lady love is the culprit, however, and the scenes where he discusses with Coffy the details of the police efforts to catch the killer (real professional, pal) remind me of old Zorro tv shows where the authorities would tell Don Diego about their plans to capture the masked man.

Coffy’s undercover identity is Mystique and while killing pusher after pusher she also encounters King George, the film’s regulation blaxploitation pimp and has her obligatory catfight with another hooker. Pam’s afros are often deadly in her films and Coffy is no exception – some strategically- placed razor blades in “Mystique’s” ‘fro leave her opponent’s fingers slashed to ribbons when she resorts to hair-pulling. 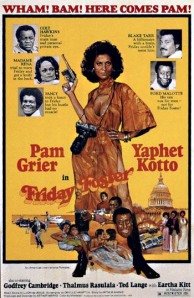 2. FRIDAY FOSTER (1975) – Pam portrays the title character, a comic strip heroine from the 1970’s who was often called “the black Brenda Starr.” Friday Foster worked as a photographer for a national weekly and the comic strip figure was regularly involved in much grittier adventures than Brenda Starr (or Mark Trail for that matter) ever had.

In this movie Friday uncovers a plot by White Supremacists to assassinate every prominent African American in the United States. Friday’s investigation into these dastardly goings-on leads her along a lengthy trail of victims, some of them played by very big-name stars.

Eartha Kitt portrays Madame Rena, a fashion designer who winds up getting killed before she can tell Friday what she knows. Godfrey Cambridge camps it up as the flamboyantly gay Ford Malotte and Thalamus Rasulala plays billionaire Blake Tarr. Tarr is so rich that Great Falls, Virginia is in his mansion’s back yard in a scene guaranteed to make Virginia residents chuckle. It would be like a shot of Niagara Falls being in a tycoon’s back yard.

Blake Tarr has hatched a secret plan to strike back against the mass- assassinations being planned and proves to be a crucial ally for Friday Foster. The White Supremacists, led by a wheelchair- bound villain played by Jim Freaking Backus, launch their assault force in the movie’s action- packed climax. Mr Magoo’s white soldiers are disguised as African Americans to give the public impression that the killings are black on black violence. Naturally Pam Power saves the day in what was sadly the only Friday Foster movie ever made.

1. FOXY BROWN (1974) – This is the definitive Pam Grier blaxploitation film. The energetic opening, complete with an even better theme song than Shaft, leaves no doubt the viewer is enjoying an event, not just a movie. I’m not kidding. The opening credits roll to multiple images of Pam that are so tightly edited the whole thing plays like a music video.

Pam plays Foxy Brown, whose man, played by Terry Carter of McCloud fame, is an undercover investigator who has just undergone plastic surgery. The new face is part of his new identity following a successful investigation of some particularly deadly criminals. Foxy’s no-good brother, played by Huggy Bear himself, Antonio Fargas, winds up clueing the bad guys in on that new identity, leading to the death of the man Foxy loves.

She’s not having it, of course, and sets out for revenge on the gangsters who killed her beau and some of the politicians those gangsters have in their pockets. The lead villains are a pair of larcenous lovebirds and are played by Kathryn Loder and Laredo‘s Peter Brown, whom ladies generally feel is the REAL Foxy Brown of this movie.

Pam in action in this film is hot, relentless and determined as she serves up revenge in the coldest manner possible. Who else could capture the calculating ruthlessness of a woman who castrates Peter Brown’s character and delivers his balls in a jar to Kathryn Loder in the unforgettable ending? (Insert your own “ball-jar” joke here)

The most famous scene from Foxy Brown comes when Foxy gets frisked before a meeting with one of the lead villains to make sure she’s not carrying a gun. She appears clean but at the crucial moment pulls a handgun out of her afro (I told you her ‘fros were dangerous in these films) and opens fire. This tasteless but memorable moment should go in a time capsule as a quick visual representation of blaxploitation films.