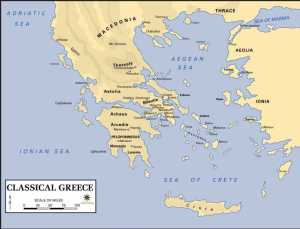 By reader request here is a blog post featuring a brief synopsis of the subject matter to each of the dozens of reviews I’ve written of ancient Greek comedies. Some of you indicated that you don’t like clicking on one with no idea what it will be about, so here we go.

I will start with the Big Three of Aristophanes, Eupolis and Cratinus.

FIRST – My overview of the themes of ancient Greek political satire. CLICK HERE

LYSISTRATA – The women of Athens and Sparta conspire to withhold sex from their men until they bring about an end to the Peloponnesian War. CLICK HERE

THE CLOUDS – A comedic look at the lighter side of the Sophist revolution in education and scientific research, with an emphasis on rhetorical ploys used in the courts. CLICK HERE

THE KNIGHTS – Aristophanes takes on the demagogue Cleon in this examination of the way dishonest candidates always have a built-in advantage in political campaigns. CLICK HERE

THE BIRDS – Proto-Orwellian fantasy in which two Athenians seeking to escape the increasingly oppressive atmosphere of their homeland join with birds to form the absurd Cloud-cuckooland. CLICK HERE

THE BANQUETERS – A clash of generations and values begins when an Athenian farmer inducts his two sons into his Phratry. CLICK HERE

MERCHANT SHIPS – Two merchant ships – one from Athens and one from Sparta – carve out a separate peace when they meet at sea. CLICK HERE

THESMOPHORIAZUSAE aka THE POET AND THE WOMEN – The women of Athens call for retribution against the famous tragedian Euripides for his negative portrayal of women in his plays. CLICK HERE

DEMOI – An Athenian man brings four dead statesmen back to life to set straight the mess that their political successors have made of the city-state. CLICK HERE

AUTOLYCUS – A less than bright athlete is supported for a political position by his well-to-do gay lover. CLICK HERE

MARIKAS – Eupolis went after the demagogue Hyperbolus the way Aristophanes went after Cleon in this comedy. The corrupt Marikas was a fictional stand-in for Hyperbolus. CLICK HERE

BAPTAE – A look at a new cult in Athens and the way in which assorted high-profile figures found it fashionable to join. CLICK HERE

TAXIARCHOI – The fey god Dionysus, on the run from enemies, enlists in a military unit about to set forth to collect taxes from Athens’ subject states. CLICK HERE

PYTINE – Cratinus’ friends try to do an intervention when they feel the comedian’s boozy love affair with Drunkenness is endangering his marriage to Comedy. CLICK HERE

PLUTOI aka WEALTH GODS – The Titans overthrow Zeus and return to power, then begin taking wealth from Athenians they feel have acquired it unjustly and redistribute it to others. CLICK HERE

DIONYSALEXANDROS – Cratinus’ stylistically innovative blend of Attic Old Comedy with the Satyr Play format in which the Judgment of Paris is used to criticize Pericles. CLICK HERE