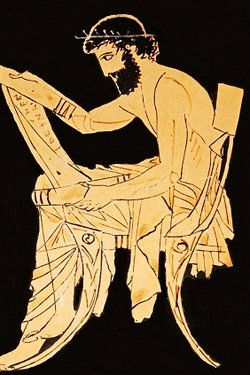 Balladeer’s Blog presents another look at an ancient Greek Comedy. This time around it’s one written by Eupolis who – along with Aristophanes and Cratinus – was one of the Big Three of Attic Old Comedy.

MARIKAS (c 421 B.C.) – This was the second comedy to emerge in the new subgenre of Attic Old Comedy called “the Demagogue Comedy”. Aristophanes led the way a few years earlier with The Knights, his comedy attacking the politician Cleon. The play Marikas finds Eupolis attacking the demagogue Hyperbolus, whose reputation for character assassination by way of overstatement lives on in our language by way of the word “hyperbole”.

As with most ancient Greek comedies Marikas has survived only in fragmentary form. Those fragments, along with contemporary references in surviving works, provide what is known about the play. Marikas, the title character, was used by Eupolis to represent the politician Hyperbolus the same way Aristophanes had used the Paphlagonian to represent Cleon in The Knights.

The ancient Greek comedies made a point of breaking the fourth wall on a regular basis (despite the way so many people have convinced themselves that that is a “postmodern” development) and Marikas opened up with a character assuring the audience that the play they were about to see was NOT just a rehashing of The Knights.

This did not stop the usual sniping between Aristophanes and Eupolis about who allegedly stole material from whom. And remember, such accusations were frequently used in Greek comedies of the time by all the comic poets so there is no way of knowing how accurate or serious the potshots about “stolen material” were.

Marikas is presented as a demagogue along the lines of Cleon and is guilty of many of the same tactics. The recent death of Cleon has spurred Marikas/ Hyperbolus’ ascent to “lord of The Stone” (The Stone being a slang reference to the speaker’s podium in the Athenian Assembly.) Just as Cleon succeeded Pericles as the most influential politician in Athens, Hyperbolus had filled the power void left by Cleon’s death. 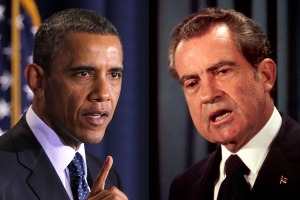 * Nixon’s version of Marikas’ low, sleazy background would be his reptilian Tricky Dick nature from his Red-Baiting days and his slush fund mess while Eisenhower’s Vice Presidential running mate.

* Obama’s version of Marikas’ low, sleazy background would be his reptilian emergence from the sewer of Chicago politics and his race-baiting days as a “Community Organizer”. 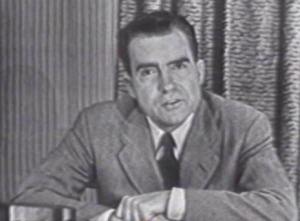 * Nixon’s version of Marikas’ political exploitation of his mother would be his rambling and incoherent “nobody will ever write books about her” gibberish following his resignation as president. (He seemed to have been trying to use her as a substitute Checkers from his slush fund speech decades earlier)

* Obama’s version of Marikas’ political exploitation of his mother would be his callous, hatemongering way of throwing her under the bus as a cardboard “white racist” figure. (Sort of a “composite” villain to go with the “composite” girlfriends he now admits to manufacturing in his autobiographical accounts.)

* Nixon’s version of Marikas’ “foreign loyalties” would be his rumored sub rosa financial ties in Cuba and Mexico. (As detailed in countless Kennedy assassination theories and countless Watergate books). 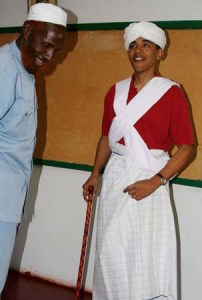 * Obama’s version of Marikas’ “foreign loyalties” would be his statement that he feels the Muslim world has moral superiority to the Western Democracies and his ridiculous attempts to pass himself off as a foreign student from Kenya during his college days. (That was often the source of the paranoid claims that Obama isn’t really a U.S. citizen. He even applied for financial aide as a “foreign student” so he has only himself to blame for the ridiculous Birther movement.)

* Nixon’s version of Marikas’ supposed history of gay lovers would be the odd rumors about his relationship with his Cuban lawyer B.B. Rebozo and with aerosol tycoon Robert Abplanalp. (Nixon apparently chose his friends based on how well their names lent themselves to humor)

* Obama’s version of Marikas’ supposed history of gay lovers would be the odd rumors about him and various NBA players as well as countless young men from his college days. (I don’t take those jokes about Michelle really being a man in drag seriously and neither should you.)

Among the charges Eupolis made against Marikas/ Hyperbolus in this comedy was that he thrived on pitting the rich against the poor, making another obvious parallel with modern-day politics. Eupolis used a Split Chorus with two separate Chorus Leaders, one leading the poor and the other leading the rich, to emphasize many of the play’s themes.

Unfortunately, beyond that setup of the play’s overall depiction of Marikas’ offenses against the Athenian public the fragments do not provide enough information to know how the story proceeded from there. The only other plot development involves the title character making arrangements for a public debate with an unknown antagonist. (Some sources speculate that it was Nicias, a known political opponent of Hyperbolus.)

The ending is known, however. Like the Paphlagonian/ Cleon in The Knights, Eupolis presents Marikas/ Hyperbolus getting his comeuppance (though in real life Hyperbolus’ spectacular fall would not come until years later). As additional poetic justice, Marikas/ Hyperbolus’ drunken old mother is depicted using her son’s bones to make her bread, all the while too inebriated to realize that’s what she’s doing.

Characters happily chowing down on this bread would be a nice “Eat the Rich” or in this case “Eat the Politicians” moment for the Athenian audience.

One of the jokes in Marikas involved the depiction of Marikas/ Hyperbolus’ supposedly distinguished mother as, in reality, a drunken, Kordax-dancing market woman who sold baked goods.

Some portions of this comedy are parodies of scenes from Aeschylus’ tragedy The Persians. Those scenes are used to emphasize Hyperbolus’ supposed Persian ties, which were always used to question his loyalty to Athens.

The name Eupolis chose for his Hyperbolus figure – Marikas – was itself a slang reference to young boy slaves that upper-class Persian men were known to use as sex slaves.

Another joke which breaks the fourth wall in this comedy involves one of the leaders of the Split Chorus talking to the audience about how Eupolis has recovered from a recent illness. (Possibly as a mock plea for sympathy from the judges. It’s difficult to tell.)

And yet another such metatheatrical joke involves (possibly) the same character telling the audience to wake up from the “boring” comedy which preceded Marikas. Remember the comedies competed against each other at the Lenaea and Dionysia just like the tragedies did.

A scene depicts the title figure filling in holes in his home’s walls with embezzled public funds. (“You stop up holes YOUR way and I’ll stop them up MY way” seems to be the gist of the joke. )

A joke implies that the title figure is really a former member of the servant class who is denying his lowly origins.

One of the lines goes that “Marikas may not have the ears of an ass like Midas did but he’s got all the other parts of an ass’ anatomy.”

There is an incomplete joke implying Hyperbolus took out loans in the Athenian Navy’s name, leaving them to pay for his own extravagences.

Older women who seek romances with younger men are depicted as being laughed at, but older women who satisfy themselves purely sexually with their young servants are supposedly admired.

Hyperbolus is depicted inflating his own military career out of all proportion to his actual accomplishments.

There was a reference to Pericles the Younger, the great man’s son, but the exact context cannot be pieced together. There was also the usual joke about the alleged promiscuity of Pericles the Elder’s female lover Aspasia.

An unknown figure in the play is indicted for treason.

A reference (possibly sexual) is made to young girls who work in mills.

The title demagogue, while describing how he became so crafty and calculating, says “I learned a great deal in the barbershops, sitting out of the way and pretending not to understand.”

Two politicians named Peisander are ridiculed, one for being squint-eyed and the other for being an alleged donkey driver.

Citizens of Cyrene are described as so wealthy that even the poorest of them wear rings worth ten Minas.

A sarcastic reference is made that Hyperbolus has looted more money from the Athenian public treasury as a politician than he ever did from enemy city-states during his military service.