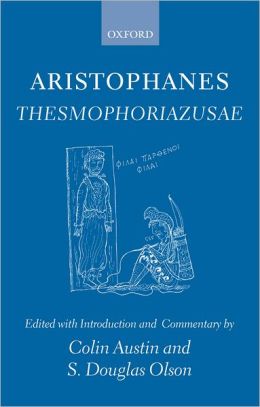 Just one of many translations available.

This comedy by Aristophanes was one that I was planning on covering very soon when I started posting my reviews of Attic Old Comedy a few years ago. For various reasons it kept falling by the wayside even though its subject matter was surprisingly relevant to ongoing controversies here in present day America, especially on college campuses.

The title Thesmophoriazusae has been rendered in different ways over the centuries – as Thesmophoria Women (the most literal translation), as Women Celebrating the Thesmophoria, and even as The Poet and the Women.

The Thesmophoria was an annual festival in ancient Greece, a festival that marked the myth about the goddess Demeter’s descent into the Netherworld to rescue her daughter Persephone, who had been stolen away by Hades, the god who ruled over the land of the dead. The festival was reserved for women only and was their version of the male initiation rites performed at all-male festivals.

The female celebrants lived in tents on the hill called the Pnyx for the three days of the Thesmophoria, which took place around the time of the autumn crop-sowing.

The premise of Thesmophoriazusae hits so close to home in these days of the repulsive Political Correctness Police that the seeming unlikelihood of it was one of the reasons I kept postponing my examination of it. Its storyline has always seemed to me like it was lifted straight from accounts of any of the countless pro-censorship rallies mounted by various groups of perpetually offended fools on campuses across the country. 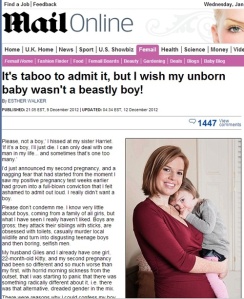 This comedy depicts the women of Athens plotting various actions to register their intense displeasure with the Greek tragedian Euripides. The reason behind their hostility? Their belief that his tragedies always depict women in an unflattering light as schemers, seducers, betrayers or helpless victims.

In other words, using the nauseating cliches spouted by the emotional cripples of what passes for liberalism in the 21st Century, Euripides is accused of “misogynistically stereotyping women in such a way as to erode their self-esteem and rob them of their feelings of empowerment.” He’s “not presenting them as positive role models” or any of the other gibberish that brainless Politically Correct robots spout with the same mindless zeal shown by religious fanatics.

We all know laughable figures like this. They’re perpetually bitter, they hate freedom of expression, they call themselves “womyn” instead of women and they are so paranoid they insist there’s a “rape scene” in the movie Gone with the Wind. Out in the real world such figures are ridiculed and marginalized as much as right-wing Christian fanatics are, but on college campuses and in politics those High Priestesses of Intolerance are taken much more seriously than they deserve. They pretend to be righting old wrongs but in reality are interested only in their own ambitions and spiteful feuds.

In a modern-day adaptation of this comedy the all-female setting of the festival would find a nice substitute in any given university’s very narrow-minded “Womyn’s Studies” Departments, the echo-chambers in which the grievances of privileged children are magnified and where anti-male paranoia reigns. 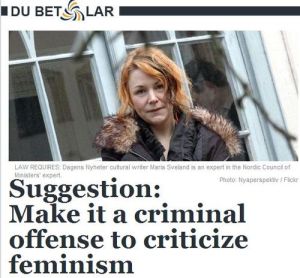 The tragic poet Euripides was a frequent butt of humor in the comedies of Aristophanes. The Acharnians includes an extended comic routine parodying Euripides’ stylistic faults (in Aristophanes’ view) that is up there with the Eugene O’Neill parody in the Marx Brothers movie Animal Crackers.

Aristophanes has a lot of fun in Thesmophoriazusae taking additional potshots at Euripides, all put in the mouths of the play’s female characters. The title women themselves were the all-important chorus of the comedy.

An actor playing Euripides is accompanied by an actor playing Mnesilochus, one of the tragic poet’s male relatives. I’ll spare you all the details of the tedious academic arguments over whether or not it is really Mnesilochus with Euripides or another one of his male relatives. At any rate the two figures are visiting the home of Agathon, another tragedian who, like so many Greek figures from back then, was known for having affairs with men as well as women.

In fact Agathon was one of the bi-guys who cultivated a feminine look and specifically went unshaven to advertise the fact. Euripides and Mnesilochus have come to recruit Agathon to go undercover as a woman at the Thesmophoria celebrations to put in a few good words for Euripides.

The anger of the women towards him has been rising and is reaching toxic levels, hence his desire to have someone infiltrate the all-female gathering and argue on his behalf plus let him know what actions they may be planning against him. 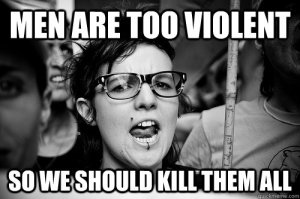 This too, could easily be adapted today by replacing Euripides with any number of male authors targeted by the intolerant gynocentric mobs on college campuses. And Agathon’s she-male air would slide right into comedic bits about gender identity politics in the academic world.  The male author could be trying to keep himself off a “banned” list to avoid having book sales drop.

In the end Agathon resists all of Euripides’ entreaties to go undercover for him, so Euripides decides to send Mnesilochus instead. Mnesilochus’ body hair is all removed in a slapstick sequence featuring several painful depilatory treatments including FIRE at one point.

Now clad and perfumed as a woman Mnesilochus attends the festival, which the play depicts opening up with a prayer to the gods and goddesses to inflict horrific fates on anyone who displeases women. Mnesilochus nearly gives himself away when he hears Euripides’ name mentioned as a man deserving of particular harm.

As this opening meeting goes on the women discuss various ways of getting revenge on Euripides and other men, either by poisoning or other extreme measures. A modern adaptation could also throw in bits where the “womyn” ponder ways of bringing down rational feminists like Christina Hoff Sommers, Camille Paglia, Kathy Shaidle, Janet Bloomfield and any others who courageously speak truth to the power and fascistic nature of narrow-minded “feministas”.

The disguised Mnesilochus tries to defend Euripides but – since this is a comedy – he does so in the most awkward way, with arguments that actually insult the group of women rather than persuade them. (For one example he states that Euripides “hasn’t given away ALL the deceitful ways that women manipulate men”.) 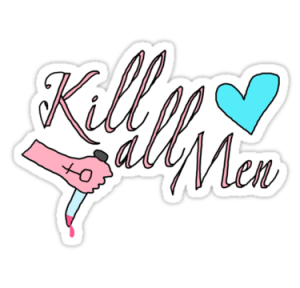 The meeting is interrupted by the arrival of another “woman” who is also clearly a man in drag like Mnesilochus. This figure is Cleisthenes, a prominent Athenian often joked about in the ancient comedies. He reveals to the ladies that he has gotten word that Euripides has sent a man to infiltrate their gathering. Mnesilochus and Cleisthenes then comically struggle to maintain their masquerade in scenes that are like a gender-switched version of the “Are there any women at this stoning?” scene in Monty Python’s Life of Brian.

Mnesilochus’ raging erection at being in the company of so many women eventually gives him away and the mob of women threaten to get violent with him. As recently as a few decades ago this scene might have seemed over the top in a modern adaptation but anybody familiar with the hate-filled, raving “SJW’s” on college campuses could tell you this scene rings too true these days.

Mnesilochus saves himself in comic fashion, by seizing a wineskin and threatening to cut it open with a knife as if it was a human hostage. Regular readers will remember that a running joke in Attic Old Comedy is that Greek women love booze like a pack of ancient Patsies and Edinas from Absolutely Fabulous. The horrified women can’t bear to see a drop of wine wasted in such a manner so they back away from Mnesilochus.

The scene goes on with a parody of Euripides’ tragedy Palamedes which I will omit for brevity’s sake. The Chorus Leader of the women addresses the audience directly next, reciting a littany of complaints about men. A modern adaptation could have a lot of fun with this by playing up the kind of whining that campus feminists do about “microagressions” that would never even phase women who function in the real world.

Next come the episodic “blackout sketches” of the comedy, which in this case take the form of a series of unsuccessful attempts by Euripides to rescue the still-captive Mnesilochus. These attempts all parody scenes from Euripides’ tragedies with emphasis on the dynamics between men and women. A Scythian policeman (a modern adaptation could make him a figure representing the pandering, eunuchoid White Knights who abet the self-proclaimed “SJW’s”) stands guard and foils all the attempts to rescue Mnesilochus.

Eventually Euripides simply goes to the women and works out a truce. He promises not to give away any more of their secrets regarding their manipulation of the men in their lives if they free Mnesilochus. Both sides agree to these terms, bringing on the comedy’s happy ending.

Normally I provide a way in which these ancient comedies could be used to lampoon the faults of modern-day liberals AND conservatives, but let’s face it – at this particular point in time there is no true conservative counterpart to the situations presented in Thesmophoriazusae.