Anti-Trump CNBC’s recent survey results further verify the shift that has gone on in America. Because de facto Third Party President Donald Trump has successfully championed the working class and the poor, America’s bloated rich pigs and Robber Barons hate him. Joe Biden represents a return to “Business as usual, with America’s hopelessly corrupt government functioning EXCLUSIVELY for the wealthy,” so naturally the abusive rich, which Democrats used to at least PRETEND to oppose, prefer him to Trump, who actually fights the abusive rich on our behalf.

Anti-Trump loons hate the president so much that they have been hyping this poll as if it’s a negative for Trump in the eyes of his supporters. Uh. No. It’s confirmation of whose side President Trump is on. If needlessly wealthy trash preferred him then it would prove he had sold out – like Bernie Sanders sold out long ago.

President Trump’s plutocratic foes own all the major media outlets, that’s why the better Trump does on behalf of America’s underdogs the more frantic the media attacks become. Needy, suffering poor and working class people don’t own media outlets, remember.

I’ll once again point out Donald Trump’s similarities to presidents like Franklin Roosevelt and John F Kennedy, two other champions of the working class and the poor. I’ve never claimed FDR and JFK helped the needy strictly for selfless reasons. They both had experienced everything money could buy, like President Trump has, and both wanted something more, like Trump: a place in history. 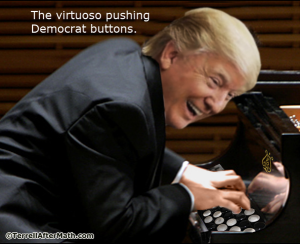 Anti-Trump loons seem determined to make Donald Trump a martyr of JFK proportions. He has done an incredible job saving America’s economy for ALL social levels, not just the wealthy, like the Democrats and Republicans usually do.

And remember, I never avoid saying if I’ve changed my mind about political figures. Around 2008 I was a Hillary Clinton supporter but the pileup of ACTUAL criminal evidence against her made me change my mind. If we ever get ACTUAL evidence against Trump like there was against Hillary I’ll address it.

So far there’s been nothing remotely resembling evidence, just the sour grapes of privileged Democrats and Republicans who are reminded every day that they are nothing but bought and paid-for whores doing the bidding of the bloated rich pigs that they SHOULD have been fighting, like President Trump is doing.

In 2016 I thought Trump would lose. Luckily I was proven wrong. And let’s face it, if the Democrats had anything REAL against the Donald they would have used it during the 2016 campaign. If you hate Trump for helping the suffering poor in this country that tells me all I need to know about you, doesn’t it?