HILLARY CLINTON EXPLAINS IT ALL

Hillary’s hate-filled Democrat partisans reacted the way you would EXPECT from members of the Party of Slavery, the Ku Klux Klan, Jim Crow, the Spoils System, Japanese Internment Camps and so many other atrocities that they try to blame the rest of the country for. In other words they have been beating President Trump’s supporters bloody in the streets to show how tolerant they are and otherwise demonstrating that DemoKKKrats are fascist thugs.

Recently Hillary Clinton, known for running a fake charity and for accepting bribes from many other countries while serving as Secretary of State, sat down with a non-existent reporter from Balladeer’s Blog.

Balladeer’s Blog: Why do you and your mindless minions hate United States President Donald Trump so much?

Hillary Clinton: BECAUSE TRUMP FILLED THE WORKING CLASS RABBLE WITH THOUGHTS ABOVE THEIR STATION IN LIFE! We DemoKKKrats were THIS CLOSE to browbeating the peasants into abandoning all hope in the political process but now those damn scumbags once again think they have a right to self-determination!

BB: But how is it his fault that you were such a notorious criminal and so personally unappealing that you needed illicit help just to rob Bernie Sanders of the Democrat nomination last year, a scandal which cost several Democratic National Committee members their positions?

HC: Bernie came out of nowhere to rob me of my rightful due just like Barack Obama did in 2008! Dammit, I don’t know why these pieces of trash called voters don’t like me but I have HAD it with Democracy.

That’s why ever since Election Night we DemoKKKrats have been acting like the fascist thugs in Spain who launched the Spanish Civil War when THEY weren’t happy with election results. American peasants are too stupid to understand it’s for their own good if I get to run things.

BB: Were Obama, Susan Rice and others in his circle feeding you information from the illegal electronic surveillance of now-President Trump during the campaign? Is that why all of you have been throwing such fits since the election – because you figured you’d win and then you and Obama could bury all the evidence of your illegal actions? 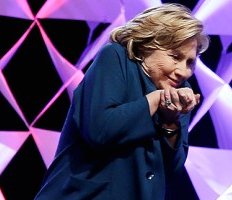 HC: Dammit nobody would be asking questions like this if I had just won the damn election! Dammit, dammit, dammit!

BB: Given the infamy of your uranium deal with the Russians in exchange for very convenient Russian money flowing through your fake charity called the Clinton Foundation why did you and Barack think people would believe that President Trump was the one with illicit Russian connections?

HC: Because we DemoKKKrats basically run the mass media in this country. It’s not our fault that Republicans are so stupid they never bothered to keep up with us in the media arms race over the decades.

BB: I guess that is a valid point. To bloated rich pigs like the Bush Family, Kevin Williamson, the Koch Brothers and other Conservatives if something can’t be measured on a profit and loss sheet they’re just not interested.

Part Two of this interview is coming soon.

2 responses to “HILLARY CLINTON EXPLAINS IT ALL”