GEORGE WASHINGTON BATTLES THE BERSERKERS – During the brutal winter at Valley Forge General George Washington must contend with more than just the elements and the distant British army. The Hessian troops the Redcoats have imported from the German- speaking world have unleashed a master plan to overrun the Continental Army once and for all.

Their ranks boast a dabbler in Nordic magic and he’s concocted a mushroom-heavy formula to transform all the Hessians into furious berserkers like those of the Viking age! George is having none of it of course, and plans to turn the Pennsylvania snow red with the blood of these latter-day berserkers of the ancient Germanic god Woden.

All this plus a gay love affair between Washington and Alexander Hamilton just to guarantee lots of free publicity!

JOHN ADAMS: WITCHSLAYER – Remember the tale of young John Adams defending a 1700s Wiccan priestess when he was a lawyer? This movie would proceed from the notion that the young witch went on to involve Adams in a battle royal with an evil coven of dark witches who were giving paganism a bad name!

Using an aresenal of mystic weapons provided by the priestess he defended John goes on to lay the thirteen witches and warlocks of the dark coven in their graves! Throw in an END_OF_DOCUMENT_TOKEN_TO_BE_REPLACED 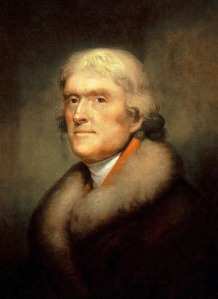 Jefferson in his favorite mink stole.

ZOMBIES OF MONTICELLO (2013) – Halloween month continues at Balladeer’s Blog with this review of cult director Eddie Wozniak’s blood-soaked combination of horror and commentary.

Learn the REAL cause of Thomas Jefferson’s death on July 4th, 1826! On the 50th anniversary of the signing of the Declaration of Independence the zombified corpses of all of Jefferson’s dead slaves rise from their graves and besiege him and his extended family in the Jefferson mansion at Monticello!

The pompous hypocrite who penned noble words about freedom and equality while OWNING other human beings tries everything to wipe out the undead legions pressing in on all sides. END_OF_DOCUMENT_TOKEN_TO_BE_REPLACED