GEORGE WASHINGTON BATTLES THE BERSERKERS – During the brutal winter at Valley Forge General George Washington must contend with more than just the elements and the distant British army. The Hessian troops the Redcoats have imported from the German- speaking world have unleashed a master plan to overrun the Continental Army once and for all.

Their ranks boast a dabbler in Nordic magic and he’s concocted a mushroom-heavy formula to transform all the Hessians into furious berserkers like those of the Viking age! George is having none of it of course, and plans to turn the Pennsylvania snow red with the blood of these latter-day berserkers of the ancient Germanic god Woden.

All this plus a gay love affair between Washington and Alexander Hamilton just to guarantee lots of free publicity!

JOHN ADAMS: WITCHSLAYER – Remember the tale of young John Adams defending a 1700s Wiccan priestess when he was a lawyer? This movie would proceed from the notion that the young witch went on to involve Adams in a battle royal with an evil coven of dark witches who were giving paganism a bad name!

FRANKLIN PIERCE VERSUS THE AZTEC MUMMY – While serving in the war between the United States and Mexico from 1846 to 1848 future president Franklin Pierce faces a menace that could alter the entire history of North and Central America.

The war has awoken an Aztec mummy from his centuries- long slumber and he’s in a VERY violent mood. His ultimate plan is to resurrect an entire army of concealed Aztec mummies to reclaim his people’s land by slaughtering the Mexican descendants of the Spaniards who stole it AND by driving the Yankee army back across the Rio Grande so they can occupy ALL of the legendary kingdom of Aztlan.

Pierce teams up with another future president serving in the war – young Ulysses S Grant – and the two form a wrestling tag-team to defeat the Aztec mummy and his resurrected brother. 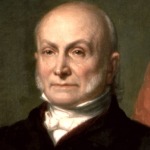 JOHN QUINCY ADAMS AND THE ILLUMINATI – Instead of being set during a time before our hero becomes president like in the previous three flicks this film would feature J.Q. in action after he was out of the presidency and got elected to Congress by running as a candidate from the Anti-Mason Party.

Conspiracy kooks have made popular the Freemasons’ alleged role in an Illuminati plot to rule the world and that scheme would provide the storyline. Adams’ archenemy President Andrew Jackson and his fellow Freemasons would be out to stop J.Q. from exposing their evil plans.

Adams would need all his martial arts skill to survive and to salvage at least the semblance of American Democracy by thwarting the ambitions of Jackson and his Illuminati masters. In 3D no less!

THE CLONES OF GROVER CLEVELAND – During President Grover Cleveland’s now-notorious secret oral surgery during his second term a mad scientist would get ahold of the cancerous mouth tissue thus extracted. He would then use his super-advanced science to create and age an army of Grover Cleveland clones who would each make confidential plans with high-placed Wall Street buddies of the president.

The combined result of these intricate one-on-one deals between the clones and the tycoons would be to destroy the American economy even more effectively than either Barack Obama or George W Bush ever dreamed of doing! Grover and his hot young wife Frances Folsom Cleveland arm themselves with as much firepower as they can carry and set out to destroy the clone army and the sinister Russian scientist who created them. Featuring a gratuitous Mother Jones nude scene!

ZOMBIES OF MONTICELLO – Learn the REAL cause of Thomas Jefferson’s death on July 4th, 1826! On the 50th anniversary of the signing of the Declaration of Independence the zombified corpses of all of Jefferson’s dead slaves rise from their graves and besiege him and his extended family in the Jefferson mansion at Monticello!

The pompous hypocrite who penned noble words about freedom and equality while OWNING other human beings tries everything to wipe out the undead legions pressing in on all sides. When his desperate plan to make their heads explode from his violin-playing fails Jefferson gets torn limb from limb by the walking cadavers and winds up in Hell serving as a slave on Satan’s plantation for all eternity!

WHACK BARACK – The 22nd Century descendants of Bill and Hillary Clinton create a time machine and come back in time to kill Barack Obama during the presidential primaries of 2008 in order to allow Hillary to become president and save the nation from the ugly disaster of Obama’s terms in office.

A showdown between science and the supernatural is set up when the ghost of Frederick Douglas also stalks Barack to punish him for being an obedient and unquestioning lackey of the whitebread Democratic Party power-brokers.

The power-brokers gain an unlikely ally in their plan to keep their clueless figurehead alive to take office: traveling back to 2008 in their own time machine are two African-American presidents from the future!

These presidents really are brilliant and capable and all the other things that the weak, inept and crooked little man named Barack Obama is NOT and they need to keep this man they despise alive in order to make sure their own timeline of events actually happens. From the creators of Lost!