COOL-NAMED SPORTS TEAM: UNIVERSITY OF THE DISTRICT OF COLUMBIA

UNIVERSITY OF THE DISTRICT OF COLUMBIA FIREBIRDS

Comment: The NAIA has the Sunbirds, D2 has the Firebirds! It seems odd that a city known for

END_OF_DOCUMENT_TOKEN_TO_BE_REPLACED

METRO STATE TO THE FINAL FOUR – NCAA Division Two’s tournament uses eight separate regions instead of four, so that means eight number 1 seeds. SEVEN of those 1 seeds made it to the Elite Eight in this year’s very odd “All chalk, all the time” tourney. The only non-1 seed was a 2 seed, so no Cinderellas for 2013. The (1) METRO STATE ROADRUNNERS advanced to the Final Four with a 78-65 victory over fellow 1 seeds the FRANKLIN PIERCE RAVENS. The Roadrunners “beep-beeped” their way past the Ravens with an astonising 16 to 2 run during the final four minutes of the game.

GIVE US WEST LIBERTY OR GIVE US DEATH – In what has become a Tournament of 1 Seeds the WINONA STATE WARRIORS stood out as a 2 seed in the Elite Eight. The WEST LIBERTY HILLTOPPERS battled the Warriors for the right to move on to the Final Four. Offense was no problem for either team and an 11-0 run to close out the 1st half put the Hilltoppers up 50-41 at the break. In the 2nd half West Liberty left Winona State coughing in their dust and led by as many as 31 points for a time. The game ended with the Hilltoppers having scored a Century Club- level 110 points to the 84 scored by END_OF_DOCUMENT_TOKEN_TO_BE_REPLACED

With 2013 just getting underway Balladeer’s Blog unveils its first college hockey rankings of the season for D3 hockey and NJCAA hockey. In my usual oddball way I do a Top 11 list for D3 and a Top 6 list for the NJCAA because of their lower number of hockey teams.

The MARIAN UNIVERSITY KNIGHTS came in as the NAIA title holders with the storied MOUNT UNION PURPLE RAIDERS carrying the banner of D3 football. 263 voters felt the Knights would defeat the Purple Raiders with just 212 voting for Mt Union. D3 can take solace from the fact that this was the most votes their team has gotten thus far in this hypothetical matchup.

Here’s a look at the winners and losers of all 3 Balladeer’s Bowl games:

Balladeer’s Blog regularly chronicles the intense gridiron rivalry between the NAIA (National Association of Intercollegiate Athletics) and the NCAA Division 3. Each year I allow my readers to vote in Balladeer’s Bowl about who would win if the NAIA champions played D3’s title winners. This year that means the MARIAN UNIVERSITY KNIGHTS from the NAIA and the MOUNT UNION PURPLE RAIDERS from D3. Will it be 3 victories in a row for the NAIA team? As always, to avoid multiple votes by the same people you can cast your vote by emailing me at END_OF_DOCUMENT_TOKEN_TO_BE_REPLACED

Comment: A lifelong dog lover like me just cannot resist this helmet! The Pointers finally got rid of END_OF_DOCUMENT_TOKEN_TO_BE_REPLACED 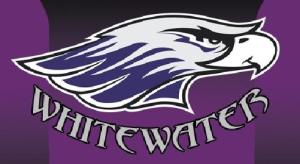 To the surprise of nobody the Whitewater Warhawks (logo at left) and the Mount Union Purple Raiders come in at numbers one and two. For newbies to D3 football the Warhawks and the Purple Raiders have played each other in the national championship game for the past SEVEN YEARS IN A ROW!!!

The Warhawks are the defending champs and have won four of the seven clashes between these two powerhouses who have emerged from the dust of the playoffs to battle for the title so frequently in recent years. For the third year in a row I’ll use my stale, tired joke that Mount Union and Whitewater should play for the championship on Labor Day Weekend and the rest of the D3 season should just be canceled.

Will it be eight years in a row that these two gridiron juggernauts monopolize the title matchup or will one of the other teams at last rise up and knock at least one of them out come playoff time? Stay tuned to Balladeer’s Blog to find out. 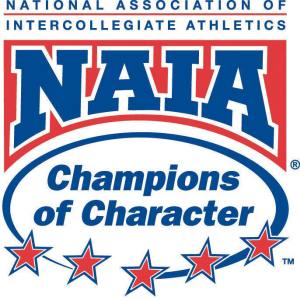 For the second year in a row the college football champions of the National Association of Intercollegiate Athletics have defeated the football champions of NCAA Division 3 college football. The Saint Xavier University Cougars, the gridiron pride of Chicago, won Balladeer’s Bowl II by having my readers vote for them nearly two to one over the NCAA’s team, the Whitewater Warhawks. The Warhawks fall to 0-2 in Balladeer’s Bowl appearances, having lost to the NAIA’s CC Fighting Saints last year.

It’s time for the 2nd edition of Balladeer’s Bowl, the annual event where I pit the NAIA college football champs against the champs from NCAA Division 3. The outcome is decided by votes from you readers. This year the NAIA is represented by the pride of Rich Koz-land AKA Chicago, IL, the St Xavier University Cougars (helmet at left). The Cougars pulled off the very difficult task of winning the title in their very first appearance in the championship game. Plus they had to do it by defeating the CC Fighting Saints, the dominant NAIA football dynasty of the past decade.

Making their second appearance in Balladeer’s Bowl are the NCAA D3 champs, the Whitewater Warhawks. The Warhawks once again defeated the Mt Union Purple Raiders for a Threepeat in D3 titles. Last year the Warhawks  lost to the 2010 NAIA champs, the aforementioned CC Fighting Saints, by a two to one margin in the voting. Will it be a 2nd straight victory for the NAIA team in the most illustrious Bowl of the season? Get your votes in and I’ll announce the winner next Tuesday, January 3rd. To keep the voting honest and prevent multiple votes by the same people you can vote by END_OF_DOCUMENT_TOKEN_TO_BE_REPLACED 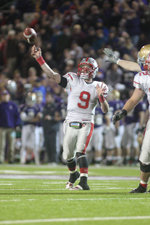 Sad to say, the college football playoffs and bowls for the divisions covered by Balladeer’s  Blog are all over now, except for some All-Star Games. The SXU Cougars won the NAIA football championship in the latest game of Saturday night, giving the Cougars and their head coach Mike Feminis their first national title. It’s not at all true that when Feminis hoisted the trophy over his head that he cried out “This one’s for Dianne!” (As in Zajdell, a Cougar of a different kind)

Anyway, to wrap up this year’s gridiron action here’s a final nod of recognition to the 2011 champions and the teams they played in their title matchups.