HODADEION PART 11: THE WRATH OF HODADEION – As the demigod Hodadeion stalked angrily toward the large longhouse lodge in which the cannibal wizards and their women were tormenting his younger brother Otgoe, he had but one regret. That was that the Chief of the cannibal wizards, Dagwahgweoses, was away at his private lodge and would need to be dealt with separately.

On the plus side, the absence of the long-eyebrowed leader of the vile sorcerors made Hodadeion feel sure that his own magic powers would be strong enough to overcome the entire village of cannibal wizards.

The demigod burst into the longhouse lodge before him and angrily took in the tableau of his brother Otgoe bound and being tortured with firebrands. The firebrands brought forth tears from Otgoe and, as the wampum-god, Otgoe’s tears, spit and mucous manifested as precious wampum.

One of the women of the village noticed the way Otgoe’s eyes lit up at the entrance of his older brother and drew everyone’s attention to the new arrival. The cannibal wizards ceased their smoking and the women ceased torturing their bound victim with firebrands.

Hodadeion was concentrating intently, partly speaking and partly singing his latest conjuration. After a few verbal challenges went ignored by the god of magic the cannibal wizards tried to stir themselves from their seated position to attack the intruder. END_OF_DOCUMENT_TOKEN_TO_BE_REPLACED

HODADEION PART 10 – THE CANNIBAL WIZARDS – Now safely on the northern side of Niagara Falls following his battle with the whirlwind, the demigod Hodadeion continued walking toward the northeast.

The god of magic knew he was getting closer and closer to the home village of the cannibal wizards who had abducted his younger brother, the wampum god Otgoe. Hodadeion could tell that from the greater frequency with which he came upon empty villages which the cannibal wizards had depopulated by feasting on all the inhabitants.  END_OF_DOCUMENT_TOKEN_TO_BE_REPLACED

HODADEION PART 9 – BATTLE WITH A WHIRLWIND – At what is now called Niagara Falls, the demigod Hodadeion stood facing an enormous Dagwanoenyent. Those beings were the ancient whirlwinds so often fought by Iroquois deities.

Dagwanoenyents were enormous, flying humanoid heads with long hair which sliced the air like chainsaw blades as the whirlwinds spun around at great speed. The destruction wrought by Dagwanoenyents was legendary and Hodadeion, the young god of magic regarded the figure floating above him with dread as he stood there on the rocky outcrops at the base of Niagara Falls.    END_OF_DOCUMENT_TOKEN_TO_BE_REPLACED 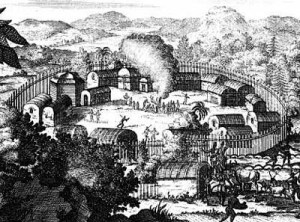 Since these items have proven so popular here’s another of my neglected epic myths presented in chapter format.

PART ONE: THE GOD OF MAGIC – The demigod Hodadeion was the son of the creator deity Tharonhiawakon and a mortal woman. He and his siblings discover their mother’s village to be deserted, the latest victim of a coven of cannibalistic wizards. Hodadeion sets out to slay the wizards and to see if any trace of life remains in other villages. CLICK HERE

PART TWO: THE WASP-MEN – Hodadeion comes across a few more deserted villages and then gets attacked by the Wasp-Men, winged insectoid humanoids. CLICK HERE

PART THREE: THE WIZARD HODIADATGON – Hodadeion finds his path barred by an evil master of “otgon” – negative or dark life energy. To continue on his quest the hero must defeat Hodiadatgon in a duel of magic. CLICK HERE  END_OF_DOCUMENT_TOKEN_TO_BE_REPLACED 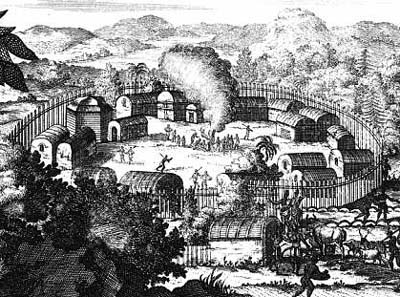 PART 2 – THE WASP-MEN – (Hodadeion was the son of the creator god Tharonhiawakon and a mortal woman, the same mortal woman who bore him Hodadeion’s siblings. Those siblings were Otgoe, the wampum god and Yeyenthwus, the future goddess of chestnut trees.)

Hodadeion ventured to the north despite his sister Yeyenthwus’ warnings. He came across a few more villages that were now deserted like his own and he realized how far-reaching was the reign of terror of the cannibalistic wizards who had decimated the population of END_OF_DOCUMENT_TOKEN_TO_BE_REPLACED

In the tradition of Balladeer’s Blog’s previous looks at neglected epic myths from the Navajo, Vietnamese, Dinka, Greek and Chinese pantheons I will examine the saga of the Iroquois god of magic Hodadeion. This will be done in the same style as my examinations of the Navajo war god’s battle with the Anaye, the war between the Vietnamese jungle and monsoon gods and the Chinese Divine Archer Yi’s adventures.

1. Hodadeion was the son of the creator god Tharonhiawakon and a mortal woman, the same mortal woman who bore him Hodadeion’s siblings. Those siblings were Otgoe, the wampum god who loved chestnuts and Yeyenthwus, the future goddess of chestnut trees.

Part 8: Niagara Falls Death Trap  – As part 7 concluded Hodadeion, the Iroquois god of magic, was alarmed to find that the twin enchantresses who were in reality two giant white herons had flown him in a huge basket to a rock at the top of what is now called Niagara Falls. They had stranded him there surrounded by a massive volume of water roaring its way past the small outcropping of rock the demigod was on, ultimately descending in a loud roar of falling liquid.

Hodadeion did not know what fate awaited him in that precarious position, or what dire menace the Heron Maidens expected to assault him in his perilous situation but he END_OF_DOCUMENT_TOKEN_TO_BE_REPLACED

Continuing the adventures of the Iroquois god of magic, Hodadeion.

PART 7 – THE TWIN HERONS – Hodadeion moved swiftly through the forest. He wanted to put as much space between himself and the giant horned serpents as possible before they grew hungry again. He continued heading north and at length came upon a pathway guarded by two enormous white herons. Each bird was bigger than a horse and at the sight of the demigod they attacked him, trying to claw and peck at him while simultaneously battering him with their powerful wings.

PART 6: HORNED SERPENTS – Continuing his journey, Hodadeion the god of magic came to a river across which an impossibly long and thick tree served as a bridge. Believing this might lead to the village of the cannibalistic wizards he was searching for the demigod set off across the makeshift bridge.

When he was halfway across Hodadeion abruptly stopped. He sensed something immense lying in wait on the other side of the river. Frustrated by being detected by their potential prey two enormous serpents with deerhorns on their heads sprang from hiding and hissed insults at the demigod who stood tantalizingly just outside their reach. Unafraid, Hodadeion shouted insults of his own back at the two monstrous serpents, who were as big around as several tree-trunks and as long as END_OF_DOCUMENT_TOKEN_TO_BE_REPLACED

PART 5 – WITCHES WITH HIDDEN HEARTS – Hodadeion the god of magic continued traveling northeast on his quest. Presently Hodadeion spied three hideously old witch-women pounding corn outside their longhouse lodge. The demigod’s sharp eyes noticed that the three women were using human bones as cooking implements and remained hidden in the forest so he could observe the obviously dangerous ladies and devise a strategy for dealing with them.

As with so many heroes in Iroquois myths Hodadeion suddenly found the breeze blowing through his ears to be the whisperings of the wind god Geha. Hodadeion was Geha’s grandson, after all, and he did not abandon his descendant in his time of need. Geha whispered to the god of magic that the witches were cannibals like the sorcerors who had depopulated so many Iroquois villages. Though very old each member of the trio was far stronger than any mortal man and used human thigh bones from their previous meals to club new victims to death.

Rashly Hodadeion let his anger get the better of him and emerged from hiding. The cannibal witch-women caught sight of him and END_OF_DOCUMENT_TOKEN_TO_BE_REPLACED