YES, CANCEL CULTURE IS AN ATTACK ON FREEDOM OF EXPRESSION

Free Speech has been under assault by both Liberals and Conservatives in recent decades, but mostly by Liberals in the past twenty years via Political Correctness and Cancel Culture. There was a time when Liberals actively supported freedom of expression because they understood it was THE primary freedom from which all other freedoms flowed. The early figures from my own country’s history protected speech with the FIRST Amendment to the Constitution because they knew all too well that ideas that are considered taboo and offensive today might be considered essential truths by future generations.

They became the Political Correctness Police and anyone who offended their 1960s attitudes had to be silenced because – as they knew so well from their own experience – when controversial ideas are given the room to breathe they can often thrive. The totalitarian asses of the 1960s left can’t bear the fact that younger people might have opinions that offend THEM as much as their opinions offended their parents’ generation.

And it’s not just in America. All around the world similar assaults on Freedom of Expression are being made by white, one percenter fascists like Jack Dorsey, Mark Zuckerberg and their ilk. When hypersensitive fools around the world want material banned as “offensive” to their closed minds, too many people still cave to their shrill demands. Considering that the more easily offended someone is the less intelligent they tend to be I find it amazing that Politically Correct censorship has thrived the way it has.

Keep in mind Spinoza’s wonderful line “Every man should think what he likes and say what he thinks.” That still rings true because no matter what the hypersensitive fools who want to censor the rest of us find offensive NONE of them has the right to try to extinguish one single product of the human mind. END_OF_DOCUMENT_TOKEN_TO_BE_REPLACED 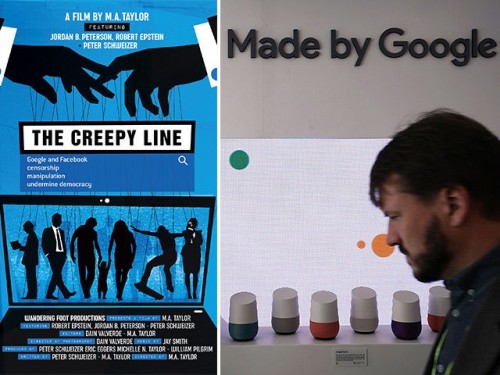 It’s no secret that Techno-Fascists like Jack Dorsey and his ilk have been waging war on freedom of expression. Big Tech has shown that it is all about corporate fascism. They really are publishers, not just providers of platforms, and deserve no Section 230 protections and should have their would-be monopoly on communication broken up.

Poland has introduced a new Freedom Act against Big Tech censorship. This act will see members of the public automatically notified of “shadowbans” and empowered to overturn restrictions if their speech online is lawful. Deputy Minister of Justice Sebastian Kaleta, who is spearheading the new legislation, confirmed that “every time an algorithm is used to limit reach, the user will be informed if and why his reach is being limited.”

Hungary is looking to take similar action to protect speech from the whims of bloated rich pigs like the Jack Dorseys and Mark Zuckerbergs of the world.

Here in the U.S. you can fight back against the Big Tech robber barons by signing the petition to break them up HERE. THANK YOU TO THE COURAGEOUS ALVAREZ GALLOSO FOR PASSING ALONG THE LINK TO THIS PETITION. YOU CAN FIND HIM HERE. 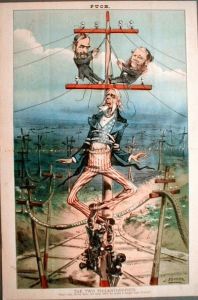 The point of the cartoon is the way those two Robber Barons – allied with like-minded newspaper tycoons (whose newspapers’ names are on the bonds around Uncle Sam) – abused their wealth and political influence to bind the United States (represented here by Uncle Sam) to their will.

This is similar to the way the Silicon Valley and Social Media Robber Barons of today cloak themselves in “socially conscious” public images while in reality clutching the United States and all its institutions by the throat.

ANOTHER “INTERNATIONAL EVERYBODY DRAW MUHAMMAD DAY” IS COMING UP!

May 20th will mark another celebration of International Everybody Draw Muhammad Day! The woman who founded it – Molly Norris – has been in hiding for years because of the Muslim fanatics trying to kill her. But hey, cowardly comedians continue to act like they’re “cutting edge” for going after Christians.

I’m an atheist and there’s no denying that if I wrote something about Jesus having sex with farm animals and corpses that would NO LONGER be daring. Christians have become the cultural “safe targets” so only the most gutless of hypocrites still think they’re being courageous by taking them on and watching them howl.

The truly untamed beast in the world’s religions is the superstitious savagery called Islam. Muslim fascists kill people simply for drawing pictures they don’t like. In the past there were plenty of depictions of Muhammad in Western art because non-Muslims sure as hell shouldn’t be bound by the rules of a religion they don’t belong to. Only recently has there been an obsession with making it taboo to draw the insane, blood-soaked child rapist who founded Islam. I can’t draw so I’m limited to showing the drawings of others.

“Once they started killing people for drawing Mohammed it became necessary for everyone to draw Mohammed – to show that there are too many to kill, and thus to teach Islam that, whatever its own proscriptions, they do not and will never apply to non-believers. Once you make drawing Mohammed a capital crime, it is necessary to make drawing Mohammed so universal that it’s no crime at all. If you claim the right to kill because you’re offended, then it is necessary to offend you all the time – until you accept the messy norms of pluralistic societies.”   END_OF_DOCUMENT_TOKEN_TO_BE_REPLACED

May 20th is International Draw Muhammad Day, started by Molly Norris, who disappeared into hiding because of death threats from Muslims afterward! I have no real ability when it comes to drawing so I’ll run this item from Blogwrath as a sign of solidarity. Enjoy the day that asks the musical question: “What kind of superstitious savagery is it to kill people for drawing pictures?” END_OF_DOCUMENT_TOKEN_TO_BE_REPLACED