For April Fool’s Day here at Balladeer’s Blog I’m giving a rest to my usual holiday offering, my review of Aleister Crowley’s Clouds Without Water, to review a movie instead. 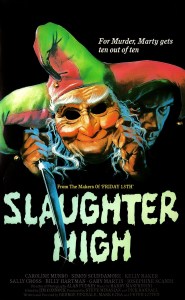 SLAUGHTER HIGH/ APRIL FOOL’S DAY (1986) – This is the low-budget horror film made in England and set on April Fool’s Day. There are still VHS tapes and YouTube videos that show the original title, but the title was changed to Slaughter High because of the year’s OTHER April Fool’s Day slasher film with a gimmick ending.

Slaughter High starts off showing us April Fool’s Day of 1976, when a group of “teenagers” including 30-something Caroline Munro go to bizarre lengths to degrade and victimize their nerdy classmate Marty. These “kids” aren’t so much bullies as they are psychopaths, actually.

After an April Fool’s Day “prank” involving nudity, electric shocks and near drowning, Marty is still alive through no fault of his classmates. The supposed popular kids get punished for their criminal assault on Marty, and perversely blame him for it! It’s that kind of movie. Hell, Marty’s tormentors were caught in the act, it’s not even like he peached on them (since this was made in England I couldn’t resist writing “peached on them”).

The psychotic teens-in-their -thirties decide Marty deserves some payback for the way they got in trouble for nearly killing him earlier, so they stage a new “prank” involving tampered-with marijuana, dangerous chemicals … and acid. C’mon, you kidders! Stop giving Marty the business! Just cut off one of his limbs or something and call it a day, ya jokesters!

If you’ve never seen a horror film before you’ll be shocked to learn that Marty gets horribly disfigured by acid in the resulting accident. Ten years later, on April Fool’s Day 1986, the killer nerd lures Carol and the others into his clutches to kill them all.

To that end Marty tricks them into attending a non-existent reunion party at their old high school, which has now been shut down as it turns out. Undeterred, the morons break into the place, where the waiting Marty kills them in assorted ways while wearing a Jester mask and high school letterman jacket.

Three guys – yes, THREE guys – directed this movie, based on a script by the same three. To try to increase the box office take they did their best to make this seem like an American-made slasher from the decade. Italian post-apocalypse movies often did this, too, in the 1980s, with my favorite example being the way 2020 Texas Gladiators featured buildings with the name “Texas” painted on them, as if buildings in America all have their state of residence clearly displayed.

Anyway, Slaughter High/ April Fool’s Day features the actors struggling VERY noticeably to disguise their British accents under poorly-attempted American accents. The funniest example is the black janitor, since the trio of directors apparently coached him by having him watch vintage Willy Best performances, then saying “Try to sound like that, but even more Sambo-ish.”

By the way, the forced attempt at convincing viewers that this movie is taking place in America instead of Great Britain is relevant beyond just the awful, inconsistent accents. The filmmakers went to a lot of trouble to make it seem like America, but kept the very, very, VERY British custom that April Fool’s Day ends at Noon.

The characters start convincing each other that all they have to do is survive Marty’s attacks until Noon and he’ll presumably give up, since 12 Noon “is when April Fool’s Day is over.” Hilarious! No Americans would ever express that notion, so all the fake Americana was for nothing!

SPOILERS: After deaths by electrocution, poisoned beer, acid baths, lawn-mower blades and more, Caroline Munro is our Last Girl. She has TWO chances to finish Marty off but both times just assumes he’s knocked out or dead, drops her weapon near his fallen form and walks away. (!)

Marty chases Carol into the Girls Room showers where the opening “prank” took place 10 years earlier and finishes her off. Next, in a sort of nod to Maniac (which also starred Munro), Marty’s dead victims come back to life and close in on him.

And then … Marty wakes up. Yes, the original April Fool’s Day title makes even more sense now with this ripoff, gimmicky development. It’s really been just a few days since Marty was disfigured by the acid.

He’s in a mental hospital and just for lame sequel bait, he kills the attending nurse and doctor, mugs for the camera and then peels off part of his disfigured face. Had this been a financial success apparently the next movie would have featured Marty really getting revenge on his classmates.

The gore effects in this movie range from pretty good to silly and the title song is fun, but the lyrical references to April Fool’s Day at first seem out of nowhere when you settle in to watch a movie called Slaughter High.

Simon Scuddamore played Marty and committed suicide in real life after the film was released. Cast members claim he seemed very down during filming. That adds a downbeat note to this flick as well as some unearned eeriness points.

In 1990 Caroline Munro married George Dugdale, one of the directors of this movie. Or maybe all three directors married her, since they don’t seem to have been able to get much done individually. She let their two children bear the Dugdale name, but I have no idea if that was just an April Fool’s Day joke on her husband. Or maybe the joke was on the two kids. (I’m just kidding.)