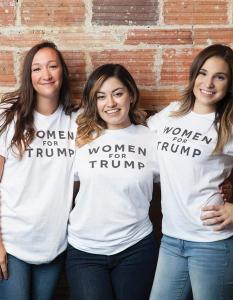 And the hits! Keep! Coming! President Donald Trump, the new FDR, JFK, Harry Truman and Theodore Roosevelt, continues his destruction of the Democrats’ delicate “narratives.” Despite the way privileged white Democrats try to paint him as anti-Hispanic, the polls that Democrats live by now show at least 50% of Hispanic voters have a favorable impression of him. He continues to make similar inroads into the black vote AND he has more female senior advisors than Obama, Bush and Clinton did!

The link is below, but I am STILL loving the way Trump’s successes keep driving the deranged party of the Democrats even more crazy! (I left the Democrats to become an Independent Voter.) He’s already helped the working class and the poor of all colors immeasurably and this story is gravy.

But remember, Trump is NOT a real Republican. Republican trash like the Bush Family and the National Review filth love reminding us!

He’s a de facto Third Party President fighting both crooked political parties, which is why he’s worth supporting! But. back to the main point here, he has more female senior advisors than the last three presidents did at this point in their presidency!