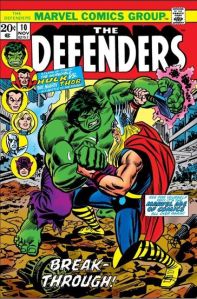 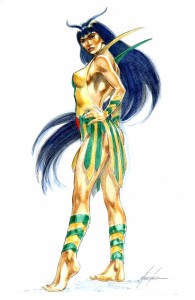 The battling super-foes inflict kaiju-sized damage on Los Angeles but as the hours go by the more it becomes apparent that Thor and the Hulk are so evenly matched the struggle could go on indefinitely. The only thing that breaks up the contest is the sudden arrival of the combined forces of the rest of the Defenders and the Avengers.

Luckily they aren’t there to fight, but to explain to Thor (the Hulk doesn’t care) why the two teams declared a truce. In flashback Doctor Strange and the others relate how Captain America and Sub-Mariner compared notes and realized that they were all being used by at least Loki and possibly an accomplice.

Cap and Subby rounded up the Vision and the Scarlet Witch in French Polynesia, the Swordsman in Bolivia, Iron Man in Mexico and the Black Panther and Mantis back at Avengers’ mansion. Sub-Mariner then got the assembled Avengers past the mystic defenses at Dr Strange’s Sanctum Sanctorum.

Inside the Avengers came face to face with Doc plus the Silver Surfer, Valkyrie and Hawkeye. Sub-Mariner prevented his fellow Defenders from jumping to conclusions and attacking the Avengers, following which all the assembled heroes began comparing notes to try to determine what was really going on and what the Evil Eye of Avalon had to do with it.

The Defenders and Avengers who fought each other around the world for the other fragments of the Evil Eye reconcile with each other as explanations are offered all around. Hawkeye, of course, strikes the lone sour note, childishly taunting his former teammates about how much he was enjoying fighting them alongside his NEW teammates. Hawkeye and the Swordsman do their usual macho back and forth, too.

Eventually the two super-teams decided to go out west to get Hulk and Thor and the final fragment of the Eye. With all the super-heroes now up-to-date the Avengers use their authority to declare a whole block of Los Angeles off-limits to the public as the 14 super-powered figures plan to reassemble the Evil Eye, unsure of the potential consequences.

At first Dr Strange just laid the six pieces near each other on the street, smallest to largest. The fragments could be telescoped together to reassemble the relic. From the Dark Dimension, Dormammu at last had what he wanted and struck. He transported his mystic servant Asti the All-Seeing to Los Angeles, where Asti scooped up the six segments and – before the super-teams could stop him – he teleported back to the Dark Dimension to give Dormammu the reassembled Eye.

With the Evil Eye in his possession, Dormammu at last carries out his plan. Causing a gigantic mental image of himself to appear in the skies over Los Angeles he does his Villain Rant, spelling out to the Defenders and Avengers what he’s doing.

Though he was bound by his Galactus-like vow to never invade Earth’s dimension again, the Evil Eye of Avalon gives Dormammu the ability to simply MERGE our dimension with his. All of the Earth (plus our entire universe) begins to take on the demonic aspects of the Dark Dimension. Even the people begin turning into monstrous figures like the kind that inhabit Dormammu’s realm.

The Avengers and the Defenders defiantly tell Dormammu’s mental image in the sky that they are joining forces and will do whatever they can to save the universe from him. +++