SYNOPSIS: Killraven and his Freemen continue their guerilla war against Earth’s alien conquerors. It’s February 2020, or “37 years in the future” as it would have been to 1983 readers. As we ended Chapter One last time around, an older but not quite elderly woman with a plasma-ray rifle entered the camp from which the Freemen were planning their assault on the alien-updated Cape Canaveral. She identified herself as a surviving astronaut from the era before the alien invasion 19 years earlier.   END_OF_DOCUMENT_TOKEN_TO_BE_REPLACED

KILLRAVEN: THE GRAPHIC NOVEL (1983) – Killraven and his Freemen continued their guerilla war against Earth’s alien conquerors. In the 7th of its official line of graphic novels, Marvel Comics let writer Don McGregor and artist Craig Russell wrap up some of the storylines left dangling by the cancellation of the 1973-1976 series of Killraven stories. In the previous post I detailed how McGregor had, in the meantime, transferred many of the Killraven story elements and time period to his independent 1978 graphic novel Sabre.

In the meantime Eclipse Comics had signed McGregor to write a regularly published Sabre comic book series. In late 1982 the original black & white graphic novel was colorized and reprinted in serialized form in the first few issues of the new Sabre series. Unfortunately for Killraven fans that immediately made our red-headed rebel leader into the proverbial red-headed step-child among McGregor’s works.

Understandably – and fairly obviously – Don McGregor was already saving up his best ideas for his own Sabre title, reducing this last chance for closure on the Killraven saga to a rushed, mundane, unsatisfying mess devoid of much of what had made the original series worthwhile. Even the dialogue, despite a few flashes of the old KR style here and there, was lackluster and pedestrian.

Killraven and his Freemen seemed like pale imitations being handled by a fill-in writer as Don McGregor virtually Rian Johnson’ed his own characters. I’ll examine that in detail as we move along, but first let’s look at some of the changes necessitated by real-world events in the years between 1976 and 1983. 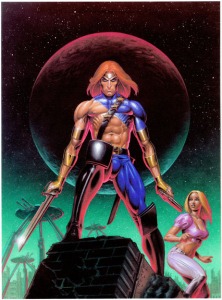 *** First, through no fault of Don McGregor or the original Killraven artists, Darth Vader became a huge pop culture figure in 1977. KR’s main alien villain, the High Overlord (introduced in 1974), had worn full-body armor and a Japanese feudal helmet like the kind Darth Vader went on to wear in Star Wars. Obviously, Star Wars was so much better known than the canceled Killraven series that this 1983 graphic novel dropped the helmet for the High Overlord to avoid looking like their villain was a ripoff of Vader, despite the fact that the High Overlord predated Star Wars.

That alteration to the look of the High Overlord was far from fatal, but became another of the distracting elements undermining this continuation of the KR story. Those other elements: END_OF_DOCUMENT_TOKEN_TO_BE_REPLACED 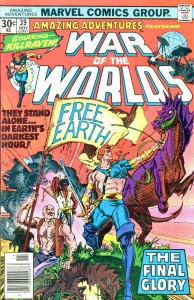 Title: The Morning After Mourning Prey

NOTE: I’m using the title that writer Don McGregor said would be used in the letters page of the previous issue, rather than the shortened title Mourning Prey that was actually used. The Morning After Mourning Prey has more of a Don McGregorish feel to it so I wish he and artist Craig Russell had stuck to it.

It is now January 2020, but we can just call it “44 years from now” as it would have been to 1976 readers. The setting is the Okefenokee Swamp, an unknown number of days after the previous issue’s New Year’s Eve celebration between Killraven and his Freemen and Brother Axe and his military-uniformed rebel colony.

Synopsis: Our heroes continue their guerilla uprising against Earth’s alien conquerors. Killraven, M’Shulla, Old Skull, Carmilla Frost (and her father Deathlok in my revisions) are being guided through the swamp toward a “seer” at “an enchanted village” which is obviously intended to be Disney World as surely as the Golden Arch several issues back was intended to be from a futuristic McDonald’s. END_OF_DOCUMENT_TOKEN_TO_BE_REPLACED

Northern Florida, in the Okefenokee National Wildlife Refuge along the Suwanee River. Killraven and his Freemen continue their guerilla uprising against Earth’s alien conquerors. They have encountered another of the pitifully few bands of humans who also defy the aliens.

We jump right into the middle of some action, as Killraven is pitting his sword against the two battle axes wielded by Brother Axe, the leader of this rebel colony. Brother Axe’s dozens of followers and Killraven’s own Freemen stand in a large circle around the combatants, watching the battle.

The cause of the conflict soon becomes clear – Brother Axe is skeptical that Killraven really is THE Killraven, the world-famous scourge of Earth’s alien conquerors. He suspects KR and his band may be fakers trying to bamboozle him or – even worse – undercover human quislings trying to pinpoint the location of Brother Axe’s rebel band so they can betray the band to their alien masters.     END_OF_DOCUMENT_TOKEN_TO_BE_REPLACED

Synopsis: Windsor Forest, GA. December, 43 years in the future. Killraven and his Freemen continue their guerilla war against Earth’s alien conquerors – Zetans in my revisions, Martians in the original, just because of the tenuous War of the Worlds connection.

NOTE: The cover reaches DC levels of deception with its depiction of Carmilla Frost, the scientist of the Freemen, trying to slay Killraven while he is restrained by the tentacles of some of the aliens. You’ll see what really happens below.

Synopsis: IN THIS STORY KILLRAVEN AND HIS REBELS INFLICT THEIR GREATEST BLOW AGAINST THE ALIENS SINCE DEATH-BIRTH. December, 43 years in the future. Killraven kneels in the red dust of the alien homeworld of Earth’s conquerors. Craig Russell’s art is incredible, and Don McGregor’s narration starts us off with:

“He had touched the blade of grass … and it turned into red dust beneath his hands. The sand sifts through his fingers now, and Killraven knows for a certainty that the desert he kneels upon is located on the homeworld of his alien foes. He is alone with that truth, and the truth is staggering! But not as staggering as the events yet to occur.” END_OF_DOCUMENT_TOKEN_TO_BE_REPLACED

Killraven and his Freemen continue their guerilla war against Earth’s alien conquerors of the future.

NOTE: Another fill-in issue by Bill Mantlo and Keith Giffen. Once again I’m having to adjust the order of a fill-in issue like I did with Sing Out Loudly … Death awhile back. This undated fill-in issue was originally set in Miami but because we have Killraven and his Freemen’s adventures in other parts of Florida ahead of us – including the Killraven graphic novel from the early 1980s – I am instead setting it in Prosperity, SC. I’m setting it in November to place it between October’s The 24-Hour Man and December’s Red Dust Legacy.

Unrevised story: The lone Killraven has “ridden ahead of ” his Freemen in response to some troubling feelings he’s having courtesy of The Power, a pre-Star Wars variation of the Force. Riding his pinkish-red scaled stallion he has come upon a large domed structure at seaside. END_OF_DOCUMENT_TOKEN_TO_BE_REPLACED 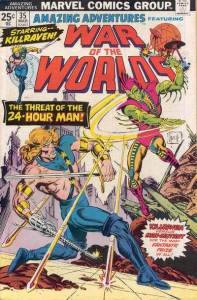 Synopsis: The ruins of Atlanta, GA. October, 43 years in the future. Killraven and his Freemen continue their uprising against Earth’s alien conquerors. The rebels are walking through Oakland Cemetery overlooking the city and encounter a beautiful but crazed young woman in tattered garments kneeling beside the emaciated corpse of a green-skinned humanoid clad in gold armor and matching helmet.

We readers watch the Freemen through the eyes of a yet-unknown character named Emmanuel who has been watching them enter his domain from hiding. The crazed, kneeling woman is his mother. Narration tells us that her unhinged whimpering is the same noise she made when bringing Emmanuel into the world.

“But that was a lifetime ago … All seven hours of that lifetime.” (Remember the story’s title.) The insane woman finally notices the presence of Killraven and company. In a panic she says “Who is there? Not G’Rath! G’Rath must stay away!”

The woman looks over our heroes then says “Do I know you? Have you come to … to save me? Don’t you know it is too late! Too late to save me. You are too late, you see. I have borne G’Rath’s child! Yes, I have.” Lightning flashes overhead and thunder rumbles.

The woman’s frantic rant continues: “My body nurtured it, yes, and sustained it, yes, and gave it life … midnight life, yes. Because it WAS midnight, you know … midnight when G’Rath’s child left my womb! And now it is morning, yes. And the spawn of G’Rath and I will seek its OWN.” So saying the woman runs off through the cemetery and our heroes run after her.      END_OF_DOCUMENT_TOKEN_TO_BE_REPLACED