OBAMA AND HILLARY’S FAILURES WITH PUTIN 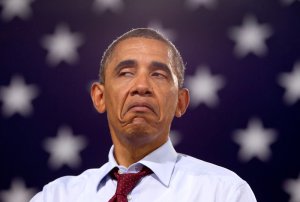 “I thought for sure that groveling for Putin and for Iran would make them like me.”

I’m sure there’s no need to rehash the details of Putin’s latest adventures featuring him bending Little Barry Obama over and driving it home. Little Barry deserves this for his candid “accidentally caught on a hot mike” private reassurance to Russia long ago that “After I get reelected I’ll have a lot more flexibility.”

Remember that? It demonstrated why a person like Obama, who never had to function in the real world, and who doesn’t know anything except what he was told to memorize in classrooms, was very unfit for any job that involved real-world responsibilities.

That “more flexibility” incident perfectly captured the condescending pomposity of American Liberals, especially the 1960s generation of Liberals that Obama mindlessly adores (and vice versa). The insinuation to Putin back then was “Look, Vladimir, we two cosmopolitan sophisticates should be able to settle all our differences like adults once I no longer have to worry about appeasing those redneck morons from my own country by maintaining a facade of toughness.”

And who could forget Hillary Clinton’s amateurish “RESET BUTTON” with Putin, the man she now paints as a huge villain. Her pathetic Reset Button made Republican Gerald Ford’s “Whip Inflation Now” buttons look like something Talleyrand would have conceived.

This is so very typical of the thinking of the American Left, who have convinced themselves that the only obstacle to worldwide peace has been the United States and that if only we would “talk” with hostile leaders the whole world would be united in harmony.

A CROOK AND A FOOL DREAMS OF GOLFING WHILE THE WORLD SUFFERS.

So Obama has alienated countries close to the United States (Remember his foolish threats to the U.K. to try to get Brits to vote against Brexit?) and groveled for nations hostile to us. We see how well that approach worked with Putin, who has been cutting Barry’s shriveled little excuse for testicles off and force-feeding them to him before a worldwide audience for quite some time now. Gee, maybe the problems with Putin WEREN’T just a case of the mean old U.S. not being nice enough to him, eh Barry?

Not everyone who is hostile to the United States is automatically in the right, just as not everyone who has friendly relations with the U.S. is automatically right, either. American Liberals seem incapable of grasping this. Any nation as large as the United States will ALWAYS – no matter which party is in office – face the situation of some countries approving of our policies and some countries disapproving of them. To the hypocritical cowards of American Liberalism ONLY the people who disagree with our policies have valid points and should be listened to. END_OF_DOCUMENT_TOKEN_TO_BE_REPLACED

Welcome back to Balladeer’s Blog, the only site on the web that truly criticizes BOTH Liberals AND Conservatives equally. The END_OF_DOCUMENT_TOKEN_TO_BE_REPLACED