Here at Balladeer’s Blog I’ve never made any secret of my fondness for David Lynch and Mark Frost’s Twin Peaks. I’m even a huge fan of the 2017 continuation of the series. Well, for the most part. I could have done without the introduction of time traveling into the series and the notion of Laura Palmer being some sort of Chosen One figure.

At any rate, the past two years have seen plenty of rumors that a Season Four or a spinoff series or a companion series to Twin Peaks was in the works. The working titles that supposedly concealed the fact that this new Lynch project was actually a Twin Peaks show were Wisteria and/ or Unrecorded Night.    END_OF_DOCUMENT_TOKEN_TO_BE_REPLACED

Organs and limbs seem to be stolen for transplant use and replaced with porcelain or papier mache substitutes. This practice extends even to the heads of the victims … sometimes while they’re still alive. Obviously this is for adults only.  END_OF_DOCUMENT_TOKEN_TO_BE_REPLACED

Happy Halloween! Balladeer’s Blog marks it with a neglected work of American horror.

THE MONKS OF MONK HALL aka THE QUAKER CITY (1844-1845) – Written by George Lippard, this strange and macabre story was originally serialized from 1844-1845 before being published in novel form. This bloody, horrific work was America’s best-selling novel before Uncle Tom’s Cabin.

I always refer to this book as “Twin Peaks Goes To The 1840s.” On one level The Monks of Monk Hall deals with crime, corruption, drugs and sex-trafficking among many supposedly “respectable” citizens of Philadelphia the way Twin Peaks did with residents of the title town.

Think of Monk Hall as a combination of Twin Peaks establishments like the Black Lodge, One-Eyed Jacks and the Great Northern all rolled into one. The vast, multi-roomed Hall is honey-combed with secret passageways and trap doors. Beneath the mansion are a subterranean river plus several levels of labyrinthine catacombs filled with rats, refuse and the skeletal remains of the Monks’ many victims from the past century and a half.

The sinister staff of Monk Hall are happy to provide their members with all the sex, opium and other diversions that they hunger for behind their public veil of respectability. Throw in the occult practices of the members and there’s a sort of “American version of Sir Francis Dashwood’s Hellfire Club” feel to it. Among the novel’s more horrific characters:

DEVIL-BUG – The deformed, depraved and deranged bastard offspring of one of Monk Hall’s members and one of the many prostitutes who are literally enslaved there. Devil-Bug has spent his entire life in the Hall and has no other name. He is squat, incredibly strong and grotesquely ugly with one large gaping eye and one small, withered, empty socket on his face.

This monstrosity works as Monk Hall’s combination door-man, bouncer and executioner, gleefully murdering on demand and secreting the corpses away in the sub-basements beneath the mansion. Just to make him even more unwholesome, Devil-Bug sleeps next to the corpse of one of his victims and uses occupied coffins as furniture in his creepy rooms.

RAVONI – Interchangeably referred to as a sorcerer, mad doctor, astrologer and anatomist, this handsome but sinister man pulls the strings behind the supernatural evils of Philadelphia and vicinity. 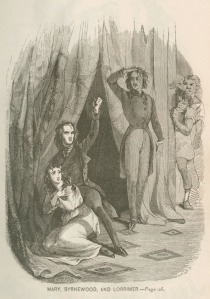 Master of an occult method of eternal youth, Ravoni has been alive for over two hundred years. (The novel repeatedly says just two hundred years, but the villain refers to having been present at the Saint Bartholomew’s Day Massacre, which happened in 1572, so it has to be longer)

Ravoni has powers of mesmerism, prognostication and can even raise the dead. He was the original owner of Monk Hall under another name long ago. Readers eventually learn the kind of dark rituals the man performed at the Hall but don’t learn the full extent of his evil plans until the climax of the novel.          END_OF_DOCUMENT_TOKEN_TO_BE_REPLACED 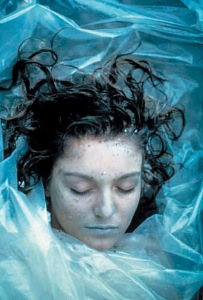 It’s been just over two weeks since the finale of the 18 episode run of new Twin Peaks chapters on cable. Like many other fans I’m still digesting some of those new episodes in light of the gloriously dark and nightmarish conclusion, so this particular blog post applies ONLY to the original Twin Peaks television series, the 1992 film Fire Walk With Me and its deleted scenes from The Missing Pieces.

Here at Balladeer’s Blog I’m often surprised at the way so many detractors still try to insist that the show and the movie made no sense. And bear in mind I am NOT referring to the various theories over particular symbolism or the lengthy debates to be had over the ethical and philosophical implications of the storyline.

No, I’m referring to the way some people dismiss the entire project as if it’s a bunch of weirdness with no discernible plot or storyline. There IS SO a (very) easily discernible plot and storyline. And I’ll say again I’m NOT talking about deeper meanings which no two people may ever agree upon, but the basic tale. END_OF_DOCUMENT_TOKEN_TO_BE_REPLACED 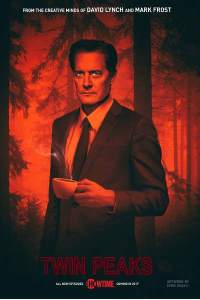 Last Monday here at Balladeer’s Blog I posted about how great Episode 16 was and mentioned the fact that the two final episodes would be shown back to back on Sunday, Sept 3rd.

Now that the final parts have aired I feel that Episode 17 was for the fans and Episode 18 was for David Lynch himself. Fans who want tidy closure got as much of that as Lynch is capable of providing in Episode 17. (And hey, looks like NOBODY can play a Long Game like Gordon Cole can. Although I guess that’s easy to do when it’s not your OWN butt trapped in the Black Lodge for 25 years.)

Episode 18 struck me more like a Lynchian horror film. Especially that ending. I loved it and if that is all the Twin Peaks we ever get I am just fine with it. If you aren’t, then blame our beloved hero FBI Agent Dale Cooper.

Cooper could have just left well enough alone, but no. And he piled foolishness upon foolishness in Episode 18, just like characters in a horror film do. As a MINIMUM, after all he had learned and all he had been through why would he go anywhere near any establishment bearing the name Judy? 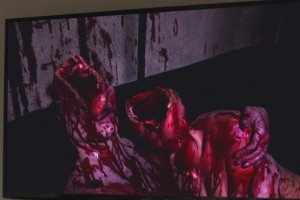 I was disappointed to see Coop and Diane get together (however briefly) instead of him and Audrey, but what can you do?

The thing that impressed me the most about Lynch’s directing on this 18 episode run was the way he kept up with the times. More so than many of the long-time fans did.

The original Twin Peaks used the story-telling approach of soap operas, while this revival employed the dramatic structure of ARG’s. Frost and Lynch out-did some of the twenty-some year olds who have been flooding the internet with ARG’s for years.

And I was not disappointed at all with that closing scene. A clip of the final four minutes and 20 seconds is below. WARNING: If the names Chalfont and/or Tremond aren’t familiar to you from the original Twin Peaks and Fire Walk With Me then you won’t get the horror of the ending.

Since even the freeze-frame on the video gives away info, people who don’t want the closing scene spoiled in any way should NOT click to read more: END_OF_DOCUMENT_TOKEN_TO_BE_REPLACED

Say what you will about Mondays, I don’t know how anyone can feel anything but great today after last night’s developments in Twin Peaks: The Return.

Cooper’s okay, Audrey danced in whatever odd purgatory/ coma/ lodge/ mauve zone she’s in and two of the right characters got killed. On top of that you had the Dougie Tulpa, the Diane Tulpa, Richard’s wild death scene, it was terrific!

I was one of the people who was actually okay last week with Philip Jeffries being reincarnated as a teapot-kinda-thingie because hey – David Bowie’s dead in real life. With that voice actor imitating Bowie pretty well maybe they’ll give us a brief scene of old Bowie footage with this guy dubbing in new dialogue for a Jeffries Tulpa.

Anyway, as all parties converge on the town of Twin Peaks the final two episodes will air back to back next week! Let’s hope there’s not another premature drop in the U.K.    Insert your own coffee joke here and drink a toast to the only 2017 television series with a cast whose median age is about 68. (I’m kidding.)