WHEN HERCULES JOINED THE AVENGERS

This weekend’s light-hearted, escapist superhero blog post will deal with the first time Marvel’s version of Hercules joined the Avengers in the 1960s. The demigod had subsequent periods as a member of the team, but this first time carried on from the lengthy Hercules/ Thor/ Pluto storyline that Balladeer’s Blog reviewed HERE.

Title: In Our Midst … An Immortal

Villains: The Enchantress and Ares

Synopsis: The Black Widow is secretly recruited by Nick Fury to go under deep cover by leaving the Avengers and pretending to once again become a communist agent. She is not to tell anyone that she is only faking her return to communism, not even Hawkeye, who is heartbroken and outraged when she departs Avengers Mansion.

Meanwhile, partway down Mount Olympus, Hercules is engaged in a battle with the god of war Ares. Herc challenged Ares to this fight out of anger over Ares’ taunting refusal to help Hercules against Pluto in the storyline mentioned above. END_OF_DOCUMENT_TOKEN_TO_BE_REPLACED

MANTIS 4: THE AVENGERS VS THE DEFENDERS

Defenders Roster: DOCTOR STRANGE (Stephen Strange, MD), SUB-MARINER (Prince Namor), THE HULK (Bruce Banner, PhD), THE SILVER SURFER (Norrin Radd), THE VALKYRIE (Barbara Norris) and the former Avenger, HAWKEYE (Clint Barton). (At the time of this story the Defenders functioned more like the much, much later Justice League Dark at DC, instead of their later street-level focus.)

As part of Mantis’ original run with the Avengers she took part in this milestone clash between those Avengers and the then-secret group called the Defenders. The story was presented in multiple issues of both The Avengers and The Defenders’ separate comic books. 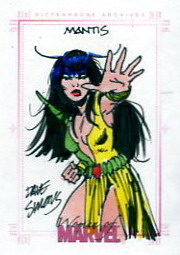 In the previous installment I examined Avengers #115 in which the team went searching for their long out-of-touch member the Black Knight. At his Garrett Castle headquarters our heroes found the Knight missing and an impenetrable mystic barrier surrounding the castle.

Mantis’ mutant empathic power enabled her to detect that Dr Strange, Master of the Mystic Arts, had erected the barrier for unknown reasons. In 1973 the Avengers had had very limited contact with Dr Strange, who had previously helped them and the Black Knight save the world.    END_OF_DOCUMENT_TOKEN_TO_BE_REPLACED

The Israeli superhero team called Infinite Horizon (Adiri Atchelet) has been a sensation so far with readers of Balladeer’s Blog.

As promised, in the near future I will post an article examining the two newest members of the team.

In the meantime here they are on this cover alongside the team members we’ve already met, like Doctor Z’Roa, Splendor, Titan, Gazelle, Professor Fever and Monitor (seen here in his new all-purple costume).

FOR THE AUSTRALIAN SUPERHERO PANTHEON END_OF_DOCUMENT_TOKEN_TO_BE_REPLACED

It’s June, the traditional month for weddings and since summertime is also the season for superhero movies I figured why not take a look at a superhero wedding. And since the movie reboot of the Fantastic Four will be coming out soon I’m going with the wedding of Mr Fantastic (Reed Richards) and Sue Storm (Invisible Girl then, Invisible Woman now).

The actual comic book in question was the October of 1965 issue of Fantastic Four Annual # 3 and it featured virtually all the superheroes and supervillains in the then-young Marvel Comics Universe. The heroes were guests invited to the wedding, Nick Fury and the Agents of S.H.I.E.L.D. were providing security for the event and the Fantastic Four’s arch-enemy Doctor Doom was mentally controlling the various supervillains into crashing the ceremony and trying to kill the heroes. Bedlam at the Baxter Building was the title.

ULTRON AND THE BRIDE OF ULTRON 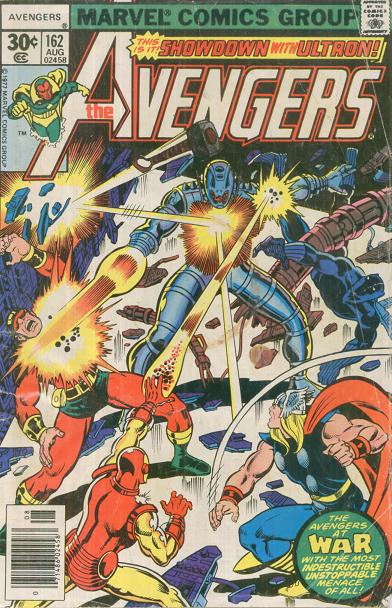 The August 1977 cover of the story The Bride of Ultron.

Reaction has been outstanding to the vintage Ultron covers I’ve been posting in honor of the release of the movie Avengers: Age of Ultron. Here’s another one – this one from the multi-part Bride of Ultron storyline when Ultron created his android bride Jocasta and was attempting to transfer the persona of Janet Van Dyne – the Wasp – into it.

And yes, that’s Jocasta as in Oedipus. Ultron was created by Hank Pym in the comic books NOT by Tony Stark, as they’re depicting in the movie. Ultron often sarcastically addressed Pym, his creator, as “father”. Hank Pym’s unstable personality (Hey, the guy was Ant-Man, Giant-Man, Goliath and Yellow Jacket for crying out loud.) was the basis for Ultron’s programming and helped lead to Ultron going rogue.   END_OF_DOCUMENT_TOKEN_TO_BE_REPLACED

ULTRON VS THE AVENGERS, FANTASTIC FOUR AND THE INHUMANS

From September 1974 comes this cover featuring Ultron attacking the Avengers, Fantastic Four and the Inhumans.

With Avengers: Age of Ultron out in theaters fans got a huge kick out of my previous look at a vintage Ultron cover. This new one was the concluding part of an Avengers/ Fantastic Four crossover from back in the days before such crossovers were a constant thing.

Plus, since it’s no secret at this point that the Avenger Quicksilver gets killed in the movie it seemed appropriate to highlight Ultron crashing Quicksilver’s wedding to the Inhuman and former Fantastic Four member Crystal. All this plus Franklin Richards was used as a deus ex machina for the first time ever in this tale! END_OF_DOCUMENT_TOKEN_TO_BE_REPLACED

An August 1969 Avengers cover featuring one of the team’s earliest battles with Ultron.

With Avengers: Age of Ultron out in theaters it seemed a good time to take a break from a very ugly world with some escapism. Thor, Iron Man and the Vision are the only Avengers from this cover that will appear in the movie, but if you want to get technical the blonde giant is Hawkeye from the period in which he abandoned his bow and arrows and had replaced Hank Pym as Goliath.

This was waaaay back when Ultron was still numbering his iterations and this time he went by Ultron 6. It was the first time he used adamantium for his android body. END_OF_DOCUMENT_TOKEN_TO_BE_REPLACED

No Robert Downey, Jr, no problem! He did his best work in Greaser’s Palace, anyway. (I’m kidding!) Since the past few weeks in all our lives have seemed like just downtime between commercials for the heavily hyped Avengers movie being released today I figured I would mark the occassion with another acknowledgment of how butt- kickingly cool this logo and team name are.

College football’s ASA Avengers won one of Balladeer’s Blog’s  “20 Coolest” contests in 2010 and you can see why! That logo adorns their football helmets and merchandise, making their gear among the most stylish and distinctive in all of college sports.