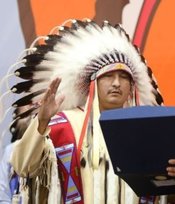 While Joe Biden hides in his bunker from the Biden Family Corruption Scandal, Independent Voter site Balladeer’s Blog notes that yet ANOTHER Native American Tribe has endorsed de facto Third Party President Donald Trump. In the endorsement, Alvin Not Afraid, Jr (the best name imaginable) called attention to President Trump’s policy of letting the tribe assign and grant permits on THEIR OWN mineral rights, unlike so many previous administrations. (link below)

As Chairman Not Afraid, Jr explained, the “Trump administration has helped the Crow Tribe in amending the Tribal Employment Rights Ordinance” to bring that about.

“Today I stand before you to endorse, as well as support, President Trump, Vice President Pence,” Not Afraid, Jr. said.

“Let me tell you something, the Democrats are full of hate. I have been a democrat all my life, 64 years. The last four years I voted for Hillary Clinton. This year I decided to go with President Trump. I am not a bootlicker, I am not an Uncle Tom.”

Earlier he had addressed the Democrat riots across the country: “Riots, they ain’t no damn protest, they’re riots … tearing up your own neighborhoods … ‘We hate Donald Trump’ … but yet, we didn’t hate the $1,200 he sent us,” Davis said on a Facebook video.

“President Trump did something that few other politicians do,” Owens said. “He sought out the opinion of a variety of African American leaders and he listened to what we had to say. Then he supported policies and programs that have real potential to help Black families.”

Owens continued: “What’s more, his new Platinum plan looks to invest millions in Black businesses and communities,” the civil rights leader observed. “This is a president who believes in giving a hand-up, not a hand-out in order to help our community thrive.”

“While Mr. Biden and the Democrats continue to take the Black vote for granted, offering nothing more than empty promises and more government dependency, President Trump is offering hope and a real plan to help African Americans,” Owens continued.

“Four years ago, President Trump asked us to give him a chance and we gave him one,” he said. “What he did with that chance shows that he deserves another four years in office. This year, President Trump has my vote.”