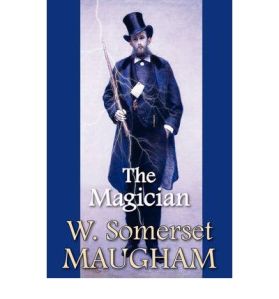 THE MAGICIAN – During Halloween Season a few years back Balladeer’s Blog reviewed the 1926 silent movie adaptation of The Magician. This time around I’ll review the original Somerset Maugham novel from 1908. It’s no secret at this late date that the malevolent sorceror of the title, Oliver Haddo, was based on the real-life Aleister Crowley. In fact, Crowley would accuse Maugham of plagiarism when he reviewed The Magician under the name Oliver Haddo, his fictional counterpart.

At any rate the 1926 film is an under-appreciated classic of the Silent Era and the novel is of an even higher quality. In Paris – where Maugham first met Crowley in real life – Dr Arthur Burdon, a prominent young British surgeon, has come to visit his fiancee, artist Margaret Dauncey.

Burdon also visits his elderly former mentor, Dr Porhoet, who has turned from medicine to the study of Magick and the occult arts. It is through Porhoet that Dr Burdon and Margaret – plus Margaret’s friend Susie Boyd – first encounter the elegant yet repellant Oliver Haddo. The cadre of friends make the mistake of ridiculing the boastful Haddo’s claims of being a sorceror in the young 20th Century.

Though Oliver’s increasingly overt and sinister demonstrations of his abilities silences their laughter the enmity that the Magician feels for Margaret, Arthur and the others intensifies after Arthur reacts to Haddo’s cruelty toward Margaret’s dog with a physical assault. Oliver forces himself into their lives, and through a combination of drugs and magical spells enthralls Margaret.

Haddo manipulates the woman into dumping her fiancee and marrying him. He has an even darker type of revenge in mind for Margaret, however: he will sacrifice her to use the young beauty’s life-force to animate one of the monstrously malformed homonculi that he is so fond of creating.

The ritual requires gradually introducing Margaret to a variety of vices and taboo pastimes in order to darken her soul. Actual penetrative sex is NOT one of those activities, since the sacrificial victim must be a virgin. Eventually Susie’s communication with Margaret and Dr Porhoet’s occult research reveal the grim fate that Oliver Haddo has in store for Margaret, prompting Arthur and Susie to join him in a race against time to save the young woman before the Magician performs the sacrifice.

The novel features much more extensive and much more horrific uses of Haddo’s powers of sorcery than the movie could get away with back when it was made. Especially effective are the portions set at the Magician’s ghastly private estate, where various natural and supernatural perils await. Readers even come to realize that some of the estate’s dead trees in semi-human form are the actual remains of some of Haddo’s past adversaries, transformed by the sorceror’s magic and left to die from the changes wracking their physical forms.

Another difference from the 1926 film version of The Magician is the way the novel features our heroes encountering an entire menagerie of nightmarish homonculi created by the evil sorceror, not just the lone monster of the movie.

The Magician Oliver Haddo makes for a very memorable villain and I’m surprised that the world still hasn’t gotten a new film version of this neglected chiller. Some critics say the overall story reminds them too much of Dracula or various renditions of the Svengali tale but I disagree. I think a modern remake set in 1908 like the novel could be a huge hit in the right hands.