DARRELL SCOTT, MARTIN LUTHER KING PERSON OF COURAGE, SAYS TRUMP HAS “DONE MORE FOR THE BLACK COMMUNITY THAN ANY OTHER PRESIDENT IN MY LIFETIME”

That statement from the highly respected Darrell Scott echoes my own sentiments about how de facto Third Party President Donald Trump has done more to help the working class and the poor than any other president of my lifetime.

A link to the entire article is below but first some excerpts:

“He’s done more for the black community than any other president in my lifetime,” Scott said. “So when he said, ‘What do you have to lose’ he showed us that we didn’t have nothing to lose at all.” 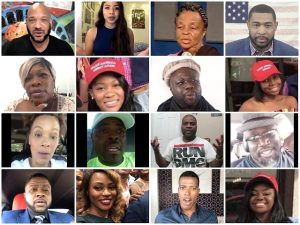 “Scott also stated that there is “enthusiasm” for President Trump amongst those located in inner cities. Scott said that he believes Democrats were “egging” on those who took part in several violent riots across America after the death of George Floyd.

Scott listed some of what he considers to be President Trump’s accomplishments for the African-American community:

“He’s exceeded expectations, he has surprised his critics, and he stepped up to the plate with one home run after another, criminal justice reform, prison reform, historic funding for HBCUs, Opportunity Zones, historic low levels of unemployment for blacks. He’s done ceremonial initiatives on behalf of the black community, dedicated Martin Luther King Jr.’s childhood home as a national landmark, he released average and ordinary Americans …”

NOTE FROM BALLADEER: And in contrast to that, let me point out that the Democrats have done nothing but tear the country apart for the past four years and continue to riot, threatening even MORE violence now that Supreme Court Justice Ruth Bader Ginsburg has passed away. Oh, and Senile Joe Biden has now said that TWO HUNDRED MILLION people have died from Covid-19. Uh. Yeah. We need Third Parties.

FOR THE FULL ITEM ON DARRELL SCOTT CLICK HERE