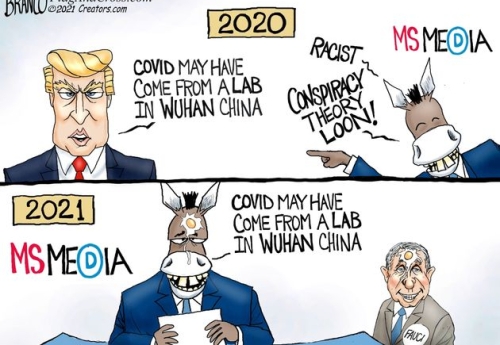 Independent voter site Balladeer’s Blog notes ONCE AGAIN that the Democrats’ media outlets have humiliated themselves because of their reflexive, irrational need to wrongly label information “lies” just because that information came from de facto Third Party President Donald Trump. Last year the very valid statement that there was some evidence linking Covid-19 to a Wuhan Laboratory was hysterically condemned as a “lie” by Democrats in the media and Big Tech Fascists at Twitter, Facebook, etc rushed to censor that information. (links below)

Now, the CDC and even the Democrats at the New York Times, Washington Post and elsewhere are admitting they were wrong AGAIN, with some of them hilariously blaming Trump for their mistakes. Actually, the corporate media’s well-known biases are to blame, as usual. This has happened over and over to the point that it’s becoming a truism to say that there may be nothing truer than something that was labeled a “Trump lie.”

Courageous non-partisan journalist Sharyl Attkisson, who has taken abuse for her hard-hitting reports on BOTH major American political parties, has outlined the biases of alleged “fact checkers” (LMAO) and has also covered over one hundred false stories the media spread about Trump. (links below)

As to this Wuhan Lab item, the forever doddering, stammering, prevaricating and flip-flopping Anthony Fauci, whose inept handling of AIDS decades ago has become the stuff of legend, continues to go back and forth on this topic depending on which way the winds are blowing on any given day. END_OF_DOCUMENT_TOKEN_TO_BE_REPLACED