SANTO VERSUS THE RIDERS OF TERROR (1970): PRESENTED BY SEXY CASEY JAMES

Special thanks once again to Balladeer’s Blog’s Official Movie Hostess, the legendarily lovely Casey James! Casey is introducing my latest look at a bad superhero movie. 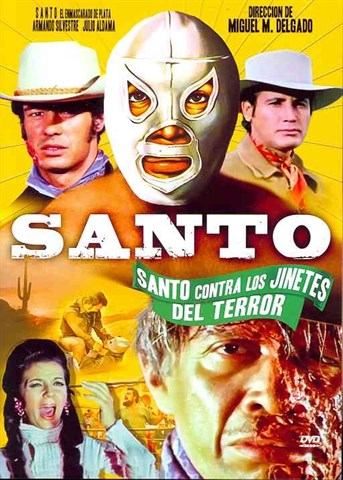 SANTO VERSUS THE RIDERS OF TERROR (1970) – Called Santo Contra Los Jinetes del Terror in its native Mexico, this is one of my all-time favorite hidden gems among the wacked-out movies about Mexican wrestler and superhero El Santo.

El Santo – often called “Samson” in English-dubbed versions of his flicks – has battled Martians, vampire women, vampire men, witches, mummies, wax figures come to life and dozens of other monstrosities. This particular flick stands out to me because of its joyously tasteless brand of “monsters” – a horseback riding outlaw gang of lepers.

Yes, LEPERS! In a move even Tod Slaughter might have deemed too exploitative a group of bandits deformed by leprosy are at large and pulling off a series of robberies. The lepers are led by “Jose”, who leads an escape from a local sanitarium where he and his fellow afflicted are being cared for. A rancher named Camerino strikes a secret alliance with the unfortunate escapees, promising a hideout plus food and a share of the loot if they commit robberies for him.   END_OF_DOCUMENT_TOKEN_TO_BE_REPLACED