A SYMBOL OF HATRED AND SLAVERY

These are busy times for the blood-soaked madmen who serve as agents for the group of homophobic and misogynistic religious fanatics called I.S.L.A.M. (Intolerant Savages Loathing All Modernity)

I.S.L.A.M. STRIKES – In Iraq, through ISIS, just one of the many global franchises of the thriving fascist movement called I.S.L.A.M. At any rate in Iraq the agents of I.S.L.A.M. have opened a SLAVE MARKET WHERE THEY SELL WOMEN. Sandra Fluke, however, probably STILL thinks she has a rougher life.

I.S.L.A.M. STRIKES- Again in Iraq, where agents of I.S.L.A.M. buried 500 Yazidis alive and have told the rest to convert to their barbaric religion or die. American Liberals weighed in to praise I.S.L.A.M. as “gallant freedom fighters combatting western oppression.” END_OF_DOCUMENT_TOKEN_TO_BE_REPLACED 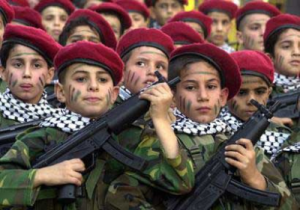 The summer of 2014 will forever be remembered as the summer when Agents of I.S.L.A.M. took the nation by storm. This sensational cable television series features the savagely superstitious practitioners of a bloodthirsty religion which is never explicitly named in the series. I.S.L.A.M. (Intolerant Savages Loathing All Modernity) operatives want all gay people dead and treat women like slaves, even mutilating their genitals.

Last night’s episode featured the religious maniacs (I’d love to know what religion they are supposed to represent but producer/director Eddie Wozniak still refuses to say) committing atrocities around the world. Among the actions taken by these barbarians included:

b) enslaving hundreds of Yazidi women in Iraq 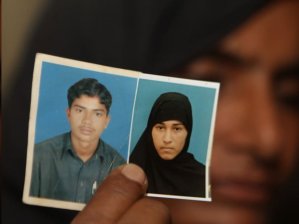 Sajjad Ahmed and his wife Muafia were slain by intolerant Muslims

The hot cable series Agents of I.S.L.A.M. (Intolerant Savages Loathing All Modernity) continues to reign supreme in the ratings! There is word now of a potential movie deal AND merchandise from the show is selling like crazy! Game of Thrones and The Walking Dead have real competition from this series about violent religious fanatics who practice a faith that is never specified on the show. Episcopalians, maybe?

The Agents of I.S.L.A.M. are forever blowing up and beheading everyone who disagrees with their homophobic, misogynistic and otherwise intolerant beliefs. In the very first episode they even mutilated the genitals of an entire village of unwilling young women, an act that was strangely applauded by the cowardly hypocrites at Brandeis University. Last night’s episode saw the blood-soaked fanatics of the title commit a series of “honor killings”. END_OF_DOCUMENT_TOKEN_TO_BE_REPLACED 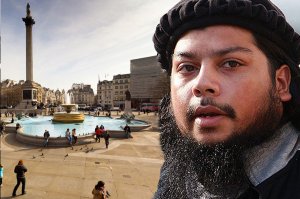 Agents of I.S.L.A.M.‘s debut last week made it the highest rated cable show of the year so far! If you like shows like Falling Skies, Game of Thrones or The Walking Dead you will LOVE this program! In Episode Two cult director Eddie Wozniak has expanded the geographical reach of his fictional group of villains called I.S.L.A.M. (Intolerant Savages Loathing All Modernity).

I.S.L.A.M. is a group of religious fanatics but Wozniak coyly refuses to say which religion they practice. That mystery may or may not be revealed as the storyline progresses. Last week the title villains mutilated the genitals of hundreds of unwilling women according to the dictates of their savage faith, whatever it may be. In this week’s installment the Agents of I.S.L.A.M. undertake multiple missions across the globe.

In England a “twitter jihad” is launched as an Agent threatens that the evil organization he represents will take over England and use Trafalgar Square as an arena for beheadings. Wozniak’s insistence on using beheadings in this series strains credibility. It’s impossible to picture a group in the 21st Century practicing a religion SO hate-filled and blood-soaked that beheadings would be one of their sacraments. Eddie needs to tone it down a little if he wants to maintain even a shred of verisimilitude.   END_OF_DOCUMENT_TOKEN_TO_BE_REPLACED

EXCELLENT BOOK: “WHY WE LEFT ISLAM: FORMER MUSLIMS SPEAK OUT” 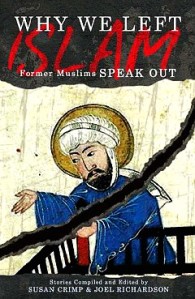 Why We Left Islam: Former Muslims Speak Out is a terrific book about the ordeals and the threats endured by people who left the religion of the title.  I’m a non-believer in all of the world’s religions and I often find myself in conversations where people who are fine with me discussing Christianity, Judaism, Buddhism or any other belief system with clinical detachment  turn gutless and groveling if I refuse to speak of Islam with reverence.

I like to mention terrific books like this one because they deserve a wider audience. The American Left is far too spineless to treat Islam with the  same critical  approach they use with Christianity and the American Right lacks credibility because of the Christian fanatics in their ranks. This book allows you to hear the kind of horrific first-hand accounts the left would be featuring on every news program if they involved Christian abuses.

And as for Liberal apologists for Islam don’t waste my time asking me why it’s the business of the rest of the world to care about these issues, especially regarding Islam’s treatment of women. It’s for the same reason it was the rest of the world’s business to pressure South Africa to end Apartheid. The American Left was vocal about that issue, but hey, that’s because the pro-Apartheid forces in South Africa didn’t roam the globe blowing up people, derailing trains or piloting planes into the sides of buildings. If they had you can bet the American Left’s reaction would have been to drop to their bellies and crawl like they do for Islam, all the while pretending they are END_OF_DOCUMENT_TOKEN_TO_BE_REPLACED

GUESS WHAT RELIGION THE SO-CALLED “SANTA KILLER” BELONGED TO?

Aziz Yazdanpanah, who allegedly committed the hate crime of killing six members of his family and then killing himself this past Christmas morning was also outraged that his daughter was dating someone outside his “faith.” If you guessed he belonged to the outdated, xenophobic, homophobic, misogynist religion called Islam you’d be correct. And let’s face it, the only people who couldn’t have guessed are delusional left wing political zealots who think they’re somehow “sticking it” to delusional right wing political zealots by whitewashing the Muslim faith in the many incidents like this that take place.

I’ll point out again that I’m a non-believer when it comes to religion, and I think all such beliefs are just mythology, but even I have been unable to ignore the END_OF_DOCUMENT_TOKEN_TO_BE_REPLACED

Filed under Milestones In Stupidity