LA ROSE DE FER (1973) – This film’s title was translated into English as The Iron Rose even though The Rose of Iron would be a more literal translation, but that’s just a tiny nitpick. La Rose de Fer was the fifth movie from Jean Rollin, whose horror productions can range from brilliant to So Bad They’re Good level.

The Iron Rose is possibly the greatest example of the “love it or hate it” nature of Rollin’s films. Personally, I love it and consider it one of his best works, but I can certainly understand why some viewers dismiss it as dull, pretentious and self-consciously artsy.

There IS a body count in The Iron Rose, but there is certainly no blood and gore. As our story begins, a beautiful woman (Francoise Pascal) lounges on the beach and regards an iron rose that has washed in with the tide. After tossing it aside she goes about her business, and before long is on a bicycling date with a young man (Hugues Quester).

Eventually the couple – listed as Le Femme and L’homme in the credits – end up taking a walk through one of those bizarrely scenic European graveyards which were tailor-made for this kind of atmospheric, artsy film. A creepy female clown and a sinister-seeming old woman are among the few other people our main characters encounter in the sprawling cemetery.

Viewers have had a few hints along the way that neither one of these young people are one hundred percent stable, but things soon go to the next level.

(Sorry, I guess a word like “soon” should NEVER be used in describing what goes on in this movie.)

The off-kilter couple hit it off so well that they decide to have sex inside a crypt for the kinky thrill of it. After having their fun and basking in the afterglow, they finally leave the crypt, but are still deep inside the cemetery.

Like something from a (thus far) mild nightmare, they see that it is now after dark and before long realize they are lost. The couple wander on and on and bicker about which way to go and whose fault it is that they are in this predicament. It’s a much more effective and well-handled depiction of such a situation than viewers got in the original Blair Witch movie from decades later.

The man and woman trudge onward, sharing their unusual worldviews in between bickering and cuddling. Jean Rollin obviously used several graveyards, not just one, because the tombstones and mausoleums seem to go on forever, like this is an anthology show episode that would end with the revelation that the couple are in Hell.

Rollin fans love to describe his films as “oneiric”, and La Rose de Fer is oneiric with a capital “O”. The movie can suck a viewer in to the point where the young lovers’ tableau feels like one of those lengthy, exhausting and frustrating dreams in which you are lost or can’t find your car keys or some other crucial item that you need and even if you find them you then realize you’ve lost something else and so on.

One of the most striking visual highlights of this film is the sheer variety of sepulchral art and architecture that Rollin uses as the backdrop to this never-ending night. Even if he had just filmed this as a documentary about European graveyards it would likely have been renowned and award-winning.

The only American counterpart to such sights might be the necropolis in Colma, CA. That site is still just sitting there, practically begging to be the location for a classic horror movie.

As The Iron Rose plays on, the young couple’s descent into madness accelerates. The man proves to be as short-tempered and violent as he can be tender and gentle. The woman’s bizarre behavior goes from charmingly eccentric to unhinged. They commit violence against each other. They fall into an open grave and make out again.

And still, nothing lies before the couple except grave markers and mausoleums for as far as the eye can see. A figurative Cemetery Planet.

The pair remain lost and their now-precarious grip on sanity loosens ever more all the way up to the unforgettable finale.

La Rose de Fer may not sound like your kind of movie, but even if it doesn’t, it can make for terrific video wallpaper on your largest screen as you entertain on Halloween night or in between greeting periodic Trick or Treaters. 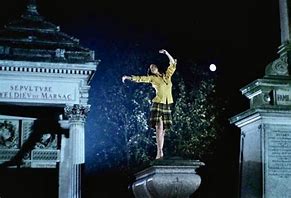