ARE TRUMP-HATERS REALLY INSANE OR ONLY PRETENDING TO BE?

However, when it comes to absurd, imbecilic, unquestioning paranoia and uninformed hatred of presidents, NOTHING tops the slobbering insanity of Trump-haters. They idiotically believe ANYTHING, including claims that he tried to kidnap Michigan’s Democrat governor, told people to inject themselves with bleach, colluded with Russia, tried an “insurrection” (LMAO), was secretly running his own nuclear program out of Mar-a-Lago (LMAO) and on and on.

As ever, I don’t mean those people who are capable of rationally discussing their criticisms of de facto Third Party President Donald Trump. I mean the ignorant, clueless psychopaths who spout their deranged hatred of Trump during their every waking moment. 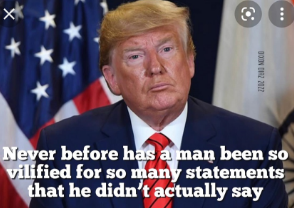 Anti-Trump loons make the worst, dumbest and most absurd statements I have ever encountered. Anti-Trumpers prove to be so uninformed and delusional that they reveal their ignorance about presidents in general every time they type out a remark about him or open their froth-flecked mouths about him.

Due to the ignorance and psychotic incoherence of Trump-haters I made it policy here at Balladeer’s Blog that if anti-Trump fascists want me to take them at all seriously they must first:

*** Begin their comment with a list of 10 things Trump did that they agree with. I can list at least 10 things I agree with that even the presidents I thoroughly despise have done. Trump-haters include an inordinate number of historically illiterate people who don’t comprehend the sheer number of actions taken by every president, so they are incapable of doing that.

If they can’t list at least 10 positive Trump items then they are revealing how uninformed they are, so there is no reason to take their anti-Trump screeds seriously.

*** TRUMP-HATERS MARKED THE SEPTEMBER 11th ANNIVERSARY BY PRETENDING THAT DONALD TRUMP AND HIS SUPPORTERS ARE WORSE THAN THE TERRORISTS WHO KILLED THOUSANDS ON THAT DAY. More HERE. And HERE.

*** REGARDING THE DEMOCRAT POLITICIAN CHARGED WITH MURDERING THE JOURNALIST CRITICAL OF HIM … TRUMP-HATERS BLAME TRUMP FOR IT. More HERE. And HERE. I’m being very charitable when I describe Trump-haters as slobbering psychopaths.

*** GROW UP, ALREADY! YOUR PERCEPTIONS HAVE BECOME NOTHING MORE THAN WISH FULFILLMENT OR DELUSIONS TO STROKE YOUR OWN EGOS AND TELL YOURSELVES HOW WONDERFUL YOU CONSIDER YOURSELVES TO BE. (Over and over again, too, until you become unbearable. Then when you drive people away you despairingly moan how you think everyone you know is becoming right-wing.)

*** YOU HAVE A SIMPLE-MINDED, COMIC BOOK-LEVEL WORLDVIEW IN WHICH LIFE IS A CHILDISH FANTASY ABOUT GOOD GUYS AND BAD GUYS WITH YOURSELVES CONSTANTLY PAINTED AS THE GOOD GUYS AND EVERYONE WHO DISAGREES WITH YOU AS THE BAD GUYS.

*** YOU INSIST ON CASTING ALL OTHER ADULTS AS SUPPORTING PLAYERS IN YOUR INCREASINGLY JUVENILE DRAMAS, WITH YOU AS THE CORRECT-THINKER SETTING STRAIGHT THE VILLAINS OF THE PIECE.

*** AND IT ISN’T JUST THAT YOU PERPETUAL CHILDREN CAST EVERYONE ELSE AS SUPPORTING PLAYERS IN THOSE DRAMAS, IT’S THAT YOUR LIMITED IMAGINATIONS CAN ONLY CONJURE UP SUCH FOURTH-RATE DRAMAS.

*** I AM TELLING YOU UNEQUIVOCALLY THAT MANY TRUMP SUPPORTERS REALLY ARE AS TOLERANT, INTELLIGENT AND COMPASSIONATE AS YOU EGOMANIACS ONLY THINK YOU ARE.

*** THE DOGMATIC ASSERTIONS THAT YOU TRY TO PUMMEL THE REST OF US WITH ARE NOT FACTS AND JUST BECAUSE YOU CAN SUMMON EQUALLY SMALL-MINDED PEOPLE (or maybe just sock puppets) WHO AGREE WITH YOU DOES NOT MAKE THEM FACTS. THEY ARE STILL NOTHING MORE THAN ASSERTIONS SHARED BY A CERTAIN NUMBER OF PEOPLE.

*** YOUR PERCEPTIONS MIGHT BETTER BE DESCRIBED AS JUST AN EXERCISE IN WISH FULFILLMENT OR PROPS FOR YOUR SIMPLISTIC WORLDVIEW IN WHICH YOU ARE “GOOD” AND EVERYONE WHO DISAGREES WITH YOU IS “EVIL.” (As if such childish concepts belong anywhere outside of religion.)

*** NO MATTER HOW YOU SUPREME ASSES DRESS IT UP IT ALWAYS COMES DOWN TO THIS: YOU THINK YOU ARE THE  AUTHORITIES ON WHAT IS RIGHT AND WHAT IS WRONG. PERIOD. AND THAT IT IS “HATE” TO CHALLENGE YOUR NARCISSISTIC AND SELF-SERVING WORLDVIEW.   (You’ve even distorted the “educational system” (LMAO) into what amounts to religious instruction in YOUR narrow-minded definitions of racism, social justice (LMAO) and so many other concepts that no two thinking human beings may necessarily agree on.)

By the way, I’m neither a liberal nor a conservative. Want proof? CLICK HERE .

14 responses to “ARE TRUMP-HATERS REALLY INSANE OR ONLY PRETENDING TO BE?”