As Halloween Month continues to unfold, Balladeer’s Blog takes a one-week break from the ongoing review of 1970s Spider-Man stories to do something more seasonal – a look at the Simon Garth zombie covers from Marvel Comics.

Title: Altar of the Damned

Comment: The first Silver Age appearance of the Marvel Comics horror character Simon Garth, a brutal coffee plantation owner who was killed and brought back to life as a zombie by his Haitian workers.

Garth was not your typical mindless zombie wanting to feed on human beings all the time. His stories provided insight into the still-functioning mind of the man trapped in this horrific fate as he battled assorted supernatural menaces, some drawn from VooDoo lore, others created by Marvel.

Simon Garth could be used against his will at times by people in possession of the Amulet of Damballah which controlled him.

The Simon Garth zombie was another example of Marvel Comics incorporating into their present-day continuity one of their monster characters from the 1950s, when they were called Atlas Comics. This zombie’s first appearance was technically in Menace #5 (July 1953). 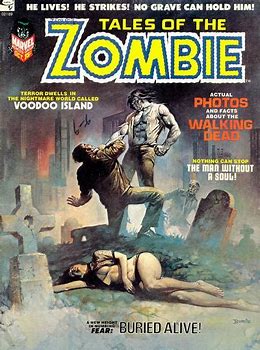 Titles: VooDoo Island and Night of the Spider

Comment: The two Simon Garth tales in this issue featured the zombie facing and killing grave robbers before finding an old friend and making it clear to him who he really was. That friend – Anton Cartier – becomes the first of several allies who try but fail to break Simon’s curse.

In the second tale from this issue, Garth does battle with a giant spider which is really his own daughter Donna Garth, transformed by a mad scientist. Donna is cured in the end, but does not realize that was her father that she fought while in spider form.

Title: When The Gods Crave Flesh

Comment: Our protagonist Simon Garth faces even more supernatural foes this time around.

In terms of character development, Simon is already acquiring more compassion as he battles a VooDoo cult to prevent them from turning even more people into shambling zombies like himself.

He saves Bruce Mason from such a fate, but Bruce’s wife Moira was already cursed. In the end, with the cultists defeated, Moira begs Simon Garth to kill her cursed form to put her spirit at rest. He agrees and grants her that mercy killing.

Titles: The Law and Phillip Bliss and Dead Man’s Judgement

Comment: The next two installments of the saga of the Simon Garth zombie were featured in this issue with another Boris Vallejo cover.

The zombie is attacked again by the VooDoo cultists from last time around. Eventually their black magic causes him to fall from a Haitian cliff into the ocean, where he is believed dead by the cultists.

In reality he walks across the ocean floor to New Orleans, where Phillip Bliss, an unscrupulous scientist, uses the Amulet of Damballah to control him. Bliss has the Simon Garth zombie rampage through a courthouse to save him from legal action and to avenge him against Mister Six, a New Orleans criminal and VooDoo practitioner. 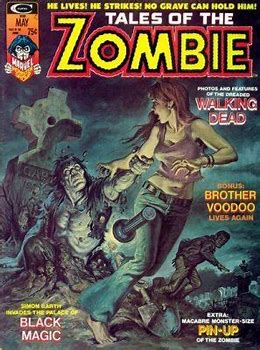 Comment: Phillip Bliss buries the Simon Garth zombie per his promise to Simon last issue. Bliss is still in possession of the Amulet of Damballah, however and when he is later attacked by more of Mister Six’s thugs, he cries out for help, which reactivates Simon Garth.

Simon shambles along, but the thugs have stolen the amulet from Bliss to give to Mister Six. He in turn hands it over to his VooDoo master, Papa Shorty, who controls Garth and uses him to kill rivals. Mister Six’s dead driver gets turned into a zombie and does battle with Simon. Simon wins, kills Phillip Bliss per Papa Shorty’s command, but then kills Papa, too when he drops the amulet. 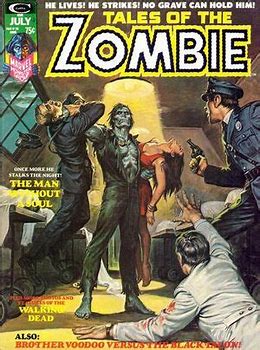 Comment: Wandering through the Louisiana bayous the Simon Garth zombie encounters Mambo Layla, the beautiful VooDoo priestess who was forced to turn him into the cursed creature he is now. She still wants to help him even after he attacks her fellow practitioners.

The pair come across a shack in the swamp. Inside they run afoul of the occupants – Eric and Joan Masterson, who have been living in isolation since they gave birth to a monstrously malformed son named Teddy. That son has grown into a hulking, clawed monster that they’ve been allowing to prey on men and women they find in the bayou.

When the Mastersons try that with Mambo Layla and Simon, it brings on their end as Simon overcomes them and the son they’ve imprisoned for years. 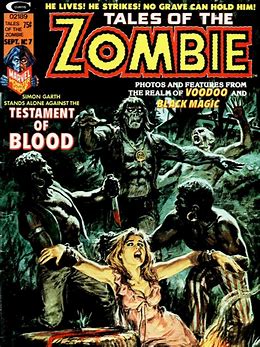 Comment: Mambo Layla and Simon Garth get separated after she accidentally injures herself. Eventually, Simon wanders onto a Louisiana estate in which the heirs of the late Brian Collier are carrying out a Cat and the Canary style whittling down of each other to be the last one living.

The zombie gets involved, in yet another example of Marvel’s unfortunate tendency to soften their 1970s horror characters by trying to turn them into superheroes instead of monster protagonists. Naturally, the evil heirs all wind up dead, Simon and Mambo Layla get reunited and continue their quest to find a cure for Garth.

New Orleans police detectives are puzzled when, amid the slaughter at the mansion, they find fingerprints traced to Simon Garth … who died two years earlier. 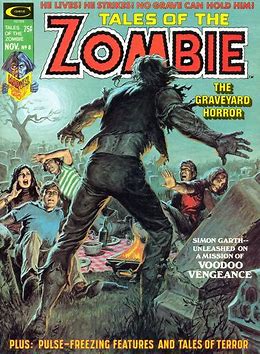 Title: A Death Made Out Of Ticky-Tacky (Should be the title of a Howard the Duck story.)

Comment: In New Orleans, Mambo Layla has hidden Simon Garth away in an abandoned building while she works to find a cure for him. Her efforts lead her to her old tutor, Papa Doc (no relation to the Duvaliers). Papa Doc formulates a mixture of gris-gris that he hopes will cure Simon Garth.

Before Layla can try the gris-gris on him, the zombie comes under the control of Fred Miller, a firefighter who retrieved the Amulet of Damballah from the burnt wreckage of Papa Shorty’s warehouse from a few issues back. Playing around with it to impress some party guests, the firefighter inadvertently summons the creature to him. After Miller and his guests realize they can’t kill the creature with bullets, knives, etc, Fred discovers he can control the zombie. He and his guests make Simon Garth do assorted degrading tricks and tasks, some rather kinky.

Fred proves to be a real piece of garbage, siccing Simon on neighbors complaining about the noise of his party, then having him accidentally scare to death someone he dislikes. He and his equally perverted guests love it. Eventually Mambo Layla and Simon are reunited and she pulls the amulet from around his neck, freeing him from its control.

Garth then beats to death Miller and his depraved partying friends and flees with Layla. New Orleans police find the Amulet of Damballah amid the carnage as they investigate the mass slaying.

NOTE: This is the last issue of Simon Garth’s 1970s adventures and wraps up all loose ends in three serialized tales.

Titles: Simon Garth Lives Again, A Day in the Life of a Dead Man, The Second Death Around

Comment: Simon carries Layla, who was mortally wounded last issue, back to Papa Doc. He informs them both that he is unable to save her and she will die within roughly 24 hours. Garth learns that Papa Doc created the gris-gris mixture that will let him die and finally be free of his hellish current existence.

Layla offers up herself so that Papa Doc can use her fading life-force to restore Simon Garth to human form for one day, after which he will revert to his zombie form. Simon and Layla sadly say goodbye. Then, temporarily restored to normal per the VooDoo ceremony, our protagonist sets about tying up loose ends in the single day left to him. He plans to use the gris-gris and be released into death when that day is through.

Simon anonymously sics the police on the original VooDoo cultists who made him a zombie and they get arrested for the various murders they committed in their rituals. Next he returns to his mansion, where his old butler is shocked to see him alive. He still works at the mansion for Simon’s daughter Donna … who is getting married that day!

Simon explains his plight to Anton Cartier, a guest at the wedding, and he informs only Donna and her intended husband Bruce Mason, whose wife the Simon Garth zombie mercy-killed several chapters back. Simon gets to attend his daughter’s wedding and reconcile with his ex-wife.

Next he visits his former business partner Brian Stockwood and tells him to sell off his half of the business and split the profits among his ex-wife, his daughter and the unfortunate Teddy Masterson, the monstrous figure imprisoned by his parents all his life. From there, Garth goes to personally shoot to death Mister Six.

In the commotion that that causes at Six’s nightclub, the police get involved. From the fingerprints and such from the mass slayings the Simon Garth zombie was involved in during previous chapters, they come to believe that Garth is actually still alive and they close in on his mansion.

Simon gets there first, where he explains to Anton Cartier and the others why he killed Mister Six. With his day of humanity expired, he becomes the zombie again. In that zombified form he is able to fight his way past the police cordon around his mansion.

Simon reaches Papa Doc’s place, where he uses the gris-gris to at last grant him the sweet release of death. Anton Cartier and Garth’s other allies bury their late friend and cover for Simon to keep his name clean with the police, who are left thinking that Simon really did die years earlier.

NOTE: Despite this tidy wrap-up, Marvel brought back the Simon Garth zombie years later for further torment and terrors, just like they had Johnny Blaze get turned back into the Ghost Rider after years of being cured. You know comic books!

FOR MY LOOK AT FAUST (1987), THE PRE-SPAWN VERSION OF SPAWN CLICK HERE.

FOR THE MOST HALLOWEENISH GHOST RIDER COVERS CLICK HERE

FOR THE MOST HALLOWEENISH WEREWOLF BY NIGHT COVERS CLICK HERE