GHOST RIDER: THE MOST HALLOWEENISH COVERS

Halloween Month hurls toward its conclusion with another seasonal post. The Marvel Comics juggernaut is THE power in pop culture these days so here is another look at one of their horror characters from their 1970s heyday. 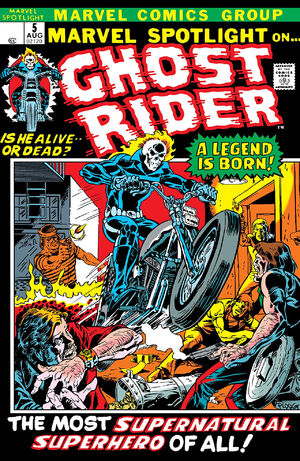 Comment: Ah, the sweet simplicity of the original Ghost Rider stories! Daredevil biker Johnny Blaze makes a deal with the devil: Johnny’s soul in exchange for Satan curing the cancer in the body of Blaze’s mentor “Crash” Simpson.

We all know how deals with the devil go, and Satan cures Simpson’s cancer but the aging daredevil motorcyclist dies in an accident during his next show. When Satan comes to claim Johnny’s soul, Blaze’s true love Roxanne Simpson (Crash’s daughter) interferes and negates the infernal contract.

The stymied devil can’t take Johnny to Hell but can inflict a kind of “Hell in nightly installments” on him by cursing him to become a monstrous fiery-skulled figure every night from then on.

NOTE: Convoluted additions about soul-reaping or about Johnny’s Ghost Rider form really being a specific demon named Zarathos, or past Ghost Riders did not come along til years later. The first Ghost Rider movie should have kept it simple like this and started adding the complications beginning with the second film. 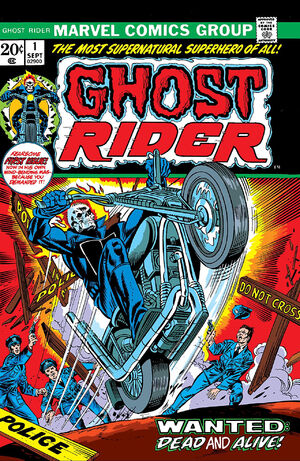 Comment: After starring in 6 more issues of Marvel Spotlight, the Ghost Rider got his own comic book.

After a quick flashback to his origin this tale continued Ghost Rider’s Marvel Spotlight storyline about his clash with Native American sorceress Linda Littletrees aka Witch-Woman.

Title: And Vegas Writhes In Flames

Villain: Roulette, the demon of gambling

Comment: Hey, the Navajo had a gambling GOD named Nohoilpi? Well Ghost Rider lore features a demon of gambling. He calls himself Roulette and his supernatural presence fuels Sin City.

Or is it the other way around?

Comment: Satan unleashes on Earth a demon called Inferno to destroy Ghost Rider. Inferno is able to whip up hundreds of people into a hate and fear-crazed mob determined to kill our title character.

Meanwhile, Satan appears to Roxanne, seeking to tempt her.

Comment: The simple-minded brute called the Hulk is easy prey for demonic deception that lands him in battle with Ghost Rider.

The monster-on-monster fracas takes place while Johnny Blaze is competing in a desert-set motorcycle race called the Desolation Run.

Title: Vengeance on the Ventura Freeway

Comment: Ghost Rider takes on his returned foe the Orb, another motorcycle-riding badass.

If you’re a fan of Gary at the Nerdrotic Channel (And if you aren’t what’s wrong with you?) you may remember he frequently wears a t-shirt featuring a picture of the eyeball-headed Ghost Rider villain called the Orb. 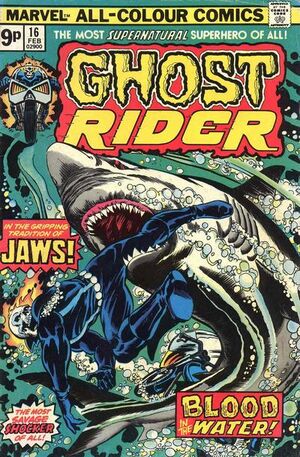 Title: Blood in the Water

Just like Marvel’s Werewolf by Night character before him, Ghost Rider clashes with America’s lingering Jaws mania in the form of a shark. 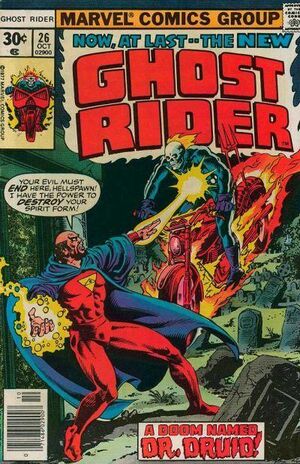 Comment: Ghost Rider clashes with the sorcerer called Dr Druid when that doctor sees our fiery main character on a rampage after losing control of his demonic alter ego.

Dr Druid was originally called Dr Droom and was one of Marvel’s pre-Fantastic Four characters that they dredged up from the past to give them another try. (Groot, Simon Garth and Patsy Walker are probably the most successful of those attempts.)

Title: Evil is the Orb

Comment: Ghost Rider’s old foe the Orb is back for yet another tussle. This one ended with the villain seemingly destroyed forever, but naturally he wasn’t.

Meanwhile, Roxanne has been searching for Johnny and gets amnesia while doing so. (Is this a Soap Opera?)

He was probably lying, but anyway Haskins rides his coal-black Hell Horse to the earthly plane where he clashes with Ghost Rider. The Bounty Hunter was granted the ability to shoot Hellfire just like our title character AND can wield a lasso made of Hellfire. 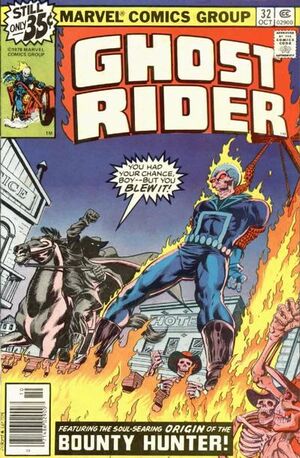 I’ll reflect on the Ghost Rider movies again. The 1st film could have featured his origin story and maybe a clash with the Orb, who would be leading Satan’s Servants (a devil-worshipping biker gang that Ghost Rider fought during his Marvel Spotlight run).

The 2nd film could have featured Ghost Rider taking on the Bounty Hunter. Hell, even have Sam Elliott play him if you want.

Title: The Boy Who Lived Forever

Comment: The villain is a boy born in the 18th Century with supernatural powers. He has been ruling his own hellish little fiefdom ever since then, like the boy who wishes people into the cornfield on that Twilight Zone episode.

The cover has nothing to do with the story but it looks great! 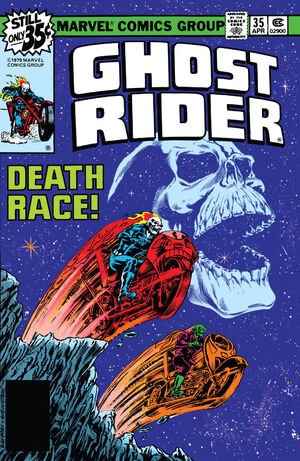 Comment: While driving across the desert Ghost Rider runs afoul of Death herself. She challenges our protagonist to a race against time to find a little girl lost in the desert.

She assumes the form of a motorcycle riding figure called Deathryder, and if she reaches the child first it dies. If Ghost Rider wins the child lives. 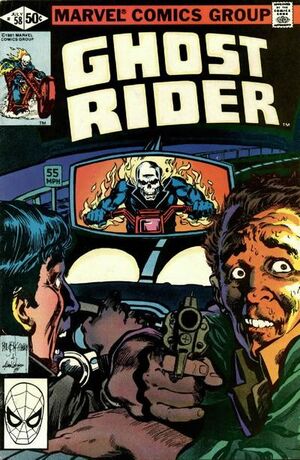 Title: Evil is the Enforcer

Comment: So you thought Evil is the Orb? Shows what you know. Evil is the Enforcer. I know, right?

Ghost Rider faces his old foe the Enforcer, a gangster who uses a mystical amulet along with conventional weaponry in his criminal activities as a mob enforcer.

Once again, the cover has little to do with the story and doesn’t even show the Enforcer. 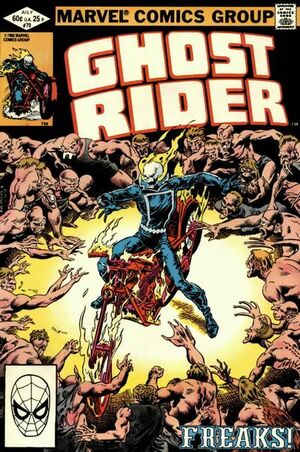 Comment: Johnny Blaze, having fallen from the heights of showbiz to being a daredevil biker in a carnival, tries to help a carnival freak when they are targeted by the Freakmaster.

That villain captures real freaks and keeps them imprisoned on his island hideaway, where he also maintains a collection of freaks that he makes scientifically.

Comment: A sorceror called Centurious long ago fell victim to his own deal with the devil. Satan split hairs to double-cross Centurious, whose studies involved the difference between a human being’s immortal soul and their mere animating life-force.

The devil took the sorceror’s soul but left him “alive” or more precisely “animated.” The catch was that with no soul he could not feel any joy or other such emotions and was largely just a living, sentient husk. If he was reunited with his soul it meant he would be in Hell for eternity.

Another refinement to the devil’s deviousness with this deal was that just to stay animated – and thus out of Hell – Centurious would have to prey upon and drain the animating life-force from others, like a soul vampire.

Centurious’ lack of a soul combined with his mystical powers made him a very potent adversary for Johnny Blaze. With no soul he was immune to our protagonist’s Hellfire and his Penance Stare. 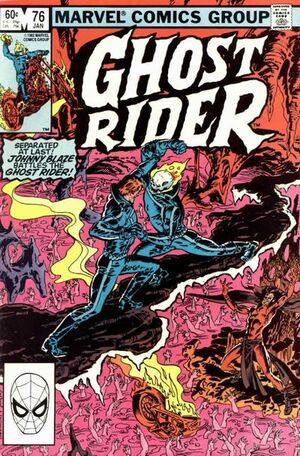 Title: Half a Demon, Half a Man

Comment: Along Hell’s Road of Lost Souls Johnny Blaze learns that a demon planted within him by Satan’s curse is the source of his form and power when he becomes Ghost Rider. The two are separated and pitted against each other.

Crucial Ghost Rider lore was being established here in a storyline which was heading for the memorable grand finale of the original Ghost Rider saga.

Comment: For the first time details were revealed about the demon named Zarathos, the infernal figure whose form Johnny assumed whenever he transformed into the Ghost Rider.

Obviously in later decades there would be further retconning, making Zarathos a fallen angel who became the Spirit of Vengeance, etc. 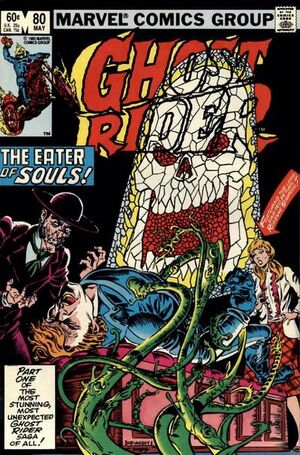 Comment: The cover may refer to an Eater of Souls but actually the villain in this story is called the Sin Eater, as in the figures from folklore. He’s a servant of Centurious but he also has connections with Zarathos.

Roxanne Simpson and Johnny Blaze get back together again for the umpteenth time in this penultimate installment of the Ghost Rider saga.

Title: The End of the Ghost Rider

Comment: After outlasting every other Marvel horror title of the 1970s, the original Ghost Rider saga came to a close with this issue. Johnny Blaze and Roxanne Simpson together faced Zarathos, the demon whose form Johnny took on whenever he transformed into the Ghost Rider.

A happy ending was at last in store for the star-crossed lovers as they managed to permanently separate Zarathos from Johnny and rode off together, leaving the demon entrapped in its own Hell, seemingly forever. But really it was just until Marvel brought back the Ghost Rider character years later.

And since filmmakers now are obsessed with trilogies there could have been a third Ghost Rider movie wrapping up all this with Zarathos, Centurious and the Sin Eater in the same flick. If there were more Ghost Rider movies they could have introduced some of the other people who got the curse.

In the meantime they could have done a cable tv series set while Johnny was still turning into Ghost Rider. On the tv show he could take on the Orb, Witch-Woman, Roulette, Inferno, Deathryder, Nathan Beame and other foes.

FOR THE MOST HALLOWEENISH WEREWOLF BY NIGHT COVERS CLICK HERE

8 responses to “GHOST RIDER: THE MOST HALLOWEENISH COVERS”