TOOMORROW (1970) – What is one part Monkees episode, one part Frankie & Annette Beach Movie, one part Help!, one part Donny & Marie in Goin’ Coconuts, one part KISS Meets The Phantom of the Park and one part Beyond the Valley of the Dolls? The answer is Toomorrow, the infamous Don Kirshner/ Val Guest cult movie with a then-unknown Olivia Newton-John in a starring role.

The aim was to launch a new pre-fab pop band like the Monkees, but this time consisting of an Aussie (Newton-John of course), a Brit (Vic Cooper), an African-American (Karl Chambers) and a white American (Benny Thomas).

Olivia sings and also dances around the guys while they play, Benny plays the guitar, Karl is the drummer and Vic plays the keyboard AND his special invention called a Tonalizer. The band is called Toomorrow because, as Karl observes, they are “Too much! Too-Morrow!”

We’re told that Vic’s Tonalizer is what gives Toomorrow its special “sound.” How special is that sound? So special that its unique vibrations can revive the stagnant culture of an alien race that’s facing decay and collapse. It seems the aliens’ own musical output has grown stale because they have long since progressed beyond the troublesome “emotions” and “heart” that Toomorrow’s members pour into their songs.

Buy this movie for the Sandbaggers or Dalgleish fan in your life, because Roy “Neil Burnside” Marsden co-stars as Alpha, the captain of the aliens’ spaceship. His forever-terse voice is unmistakable despite the – admittedly competent – makeup and prosthetic effects for the ET’s (above right). 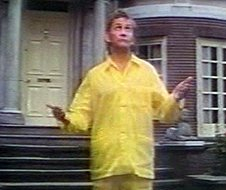 Poor Roy Dotrice (left) has to appear looking like himself AND in the makeup gear because he’s portraying an undercover alien who has been observing Earth culture for 3,000 years. His cover identity is John Williams, a professor of anthropology at a British university.

I have to compliment the makeup effects again. The scene where Dotrice peels off his outer Earth skin to reveal his true body underneath looks better than what you’d see in many actual science fiction films from 1970.

Even the spaceship effects are half-decent and are not the laughable mess that this long-buried movie’s reputation had me expecting. The tractor beam which pulls “John Williams” up to the alien vessel for his latest report is above average for the time period, too. 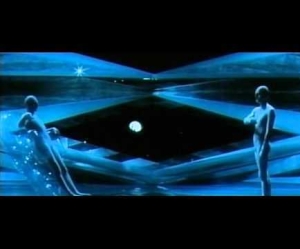 Alpha and his other crew members make it clear to Dotrice that he needs to set aside the contempt he’s come to feel for us backward Earth schlubs over the centuries because certain Earthlings hold the key to their race’s cultural survival.

A scene where the ET’s use their viewscreen to watch Toomorrow perform the movie’s (and their band’s) title song is faintly reminiscent of the opening to Help! when the cultists watch the Beatles performing. But it’s clear even without the benefit of hindsight that Olivia is the only one of the foursome with major league talent.

Despite his character’s distaste for humanity, Dotrice agrees to befriend Toomorrow, lull them into a false sense of security and then set them up for abduction to the aliens’ homeworld. Now, let’s get to know our musical heroes, the would-be Monkees of the 70s:

OLIVIA is the lead singer and mother-hen of the group. She has her own boyfriend, Matthew (Carl Rigg), the leader of a student group agitating for a larger say in the running of their London college. This establishes for the viewer that Olivia’s relationship with her fellow band members is purely platonic. But you might think that ANY self-respecting woman would keep things on a purely platonic level with the male stiffs of the musical group Toomorrow.

The leggy and buxom Olivia is not afraid to flaunt what she’s got in this movie, making her few-year flirtation with a “wholesome and demure” image in the 70s even funnier in retrospect.

BENNY, despite being kind of bland and unmemorable, is presented as a ladies’ man who is constantly oinking and boinking with assorted co-eds and even one of his instructors – Dr Suzanne Gilmore (Tracey Crisp). Although I will admit, Benny strikes me as a more likely fanny magnet than Davey Jones, but I’m a man so what do I know?

VIC is the devoted one-girl man, to contrast with the prowling Benny. His regular lady Amy (THE Imogen Hassall) is a ballerina in training and prefers grand opera to the kind of pedestrian pop music churned out by Vic’s band. This is a frequent source of conflict between the two. But let’s face it, most people would even prefer the Archies to the kind of music produced by Toomorrow.

KARL is the official Black Guy in the cast and acts like he’s auditioning for a blaxploitation film the whole time. And I will admit he DOES say “Solid!” with more feeling than anybody in The Candy Tangerine Man or Cool Breeze. In real life Chambers went on to play drums for Gladys Knight and the Pips, so after Olivia he’s the best musical talent on display here.

In a side note, the movie always takes great pains to pair up Karl with women of color even though none seem to be very much in evidence at the college until Chambers needs a dancing or canoodling partner, then PRESTO! One of those women is Shakira Baksh, the future Shakira Caine, wife of Michael.

And in a truly bizarre coincidence, then-unknown Richard Ng shows up as “Frank” in a few scenes looking just like Bruce Lee’s character Winslow Wong in Marlowe. He just sort of stands around, making it look like a series of joking cameos but everything I’ve checked indicates Lee was still not well-known enough in England for Ng’s cameos to be intentional in-jokes.

Even more of a coincidence is the way Ng would go on to appear in films with Jackie Chan plus one of the Lara Croft movies. Richard’s list of film roles rivals John Carradine’s.

DEAD ENDS: Enjoyably bad movies often feature story elements which wind up going nowhere. Of course, this was back in the days before filmmakers knew enough to pretend they were just “subverting expectations” with such antics.

a) Repeated references to how Vic’s invention the Tonalizer is responsible for the band’s special sound. Many viewers no doubt speculated that in the end the members of Toomorrow would just give the aliens that device in order to escape their clutches. Nope. Those references lead nowhere.

b) Indications that repeated exposure to Toomorrow’s music during the movie have softened up “John Williams'” feelings toward us Earthlings. In particular we get hints that he is headed for a romance with Dr Suzanne Gilmore. Nope. Those hints lead nowhere.

c) Back and forth tensions between the faculty and students at the college attended by the Toomorrow band members, with Olivia’s man Matthew in the middle of it all. Viewers might have confidently assumed that our heroes’ performance at the climactic music festival would succeed in bridging the Generation Gap and make young and old reconcile their differences. Nope. Those tensions are unresolved at movie’s end.

And d) A teasing setup for potential comedy at said music festival. Dotrice’s character is told by Toomorrow that he can sneak into the sold-out festival by claiming to be the band’s Road Agent. Before he arrives, however, Dr Gilmore sneaks in by claiming to be their Road Agent. Ah, you may think, we’re in for some zany, misunderstanding humor-of-exasperation when Dotrice tries to gain admission as Toomorrow’s Road Agent. Nope. The folks monitoring access basically just shrug and let this second Road Agent inside.

(The lesson for prospective filmmakers? You can’t screw up a joke’s payoff if you never provide any payoff. Ingenious!)

Not that the filmmakers do everything wrong. Many of the comedy bits will at least make you smile, especially the ones involving Margaret “Goldfinger Girl” Nolan as Johnson, one of the aliens disguised as a shapely human female to seduce Toomorrow member Vic away from his stuffy girlfriend Amy. This is being done lest Amy “Yoko Ono” the band into breaking up before the aliens can use Toomorrow’s music to save their civilization.

SPOILERS: In the finale, the aliens pull the band and the entire concert audience into space via their tractor beam in order to extract what they need from Toomorrow’s musical performance. They then return all the Earthlings and put things back to normal.

Amy learns to appreciate the music of her boyfriend Vic’s band (I take it back, this really IS science fiction). She even does a funky dance at the closing festival, a dance combining her ballet moves with conventional bumping and grinding.

Regular readers of Balladeer’s Blog know that I have a soft spot for weirdass movies that feature oddball songs and Toomorrow‘s soundtrack has plenty! You’ve got the title song plus Psychotronic ditties like Taking Our Own Sweet Time, Happiness Valley, Going Back, You’re My Baby Now, Let’s Move On and my personal favorite If You Can’t Be Hurt.

The absolute worst part of this film is the scene in which the aliens are chasing the band members around their spaceship while our heroes try to find a way back to Earth. Think of Josie and the Pussycats in Outer Space, but not as graceful or dignified.

Overall, Toomorrow is a bad movie, yes, but nowhere near as bad as the reputation it acquired during the decades-long wait for its official release following all the legal wrangling. It’s not So Bad It’s Good, but sports that certain unmistakable Cult Film Atmosphere that something like Beyond the Valley of the Dolls has. Like that Russ Meyer movie, Toomorrow has kitsch appeal in spades and in my opinion has more “rewatchability” than any given episode of The Monkees.